Laos makes me want to do everything slowly; it’s so chilled out and laid back, so it’s a shame we only had four days in Luang Prabang. It’s also a shame that those days were so cold and rainy – I never expected Laos to be chilly and have me rugged up in all my ‘winter’ clothes!

After two days of no working and little internet connection on the slow boat trip, Barry was keen to catch up on a few work things. I had no such motivation so took myself on a trip to Pac Ou caves (or Tam Ting Caves), where thousands of Buddha images have been left by the devoted. 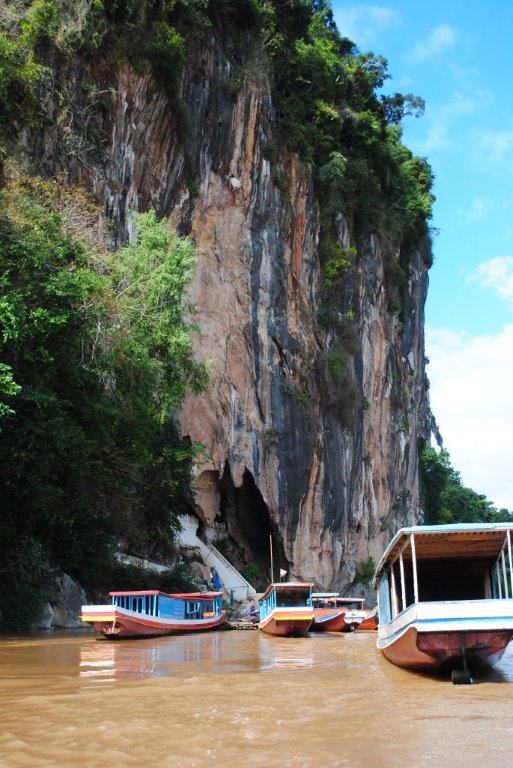 I took a (short) slow boat trip up and across the Mekong to get there. It’s also possible to kayak but the heavy rains had the Mekong moving incredibly swiftly, often taking whole trees along the current so I didn’t think that would be a particularly enjoyable way to spend the morning. 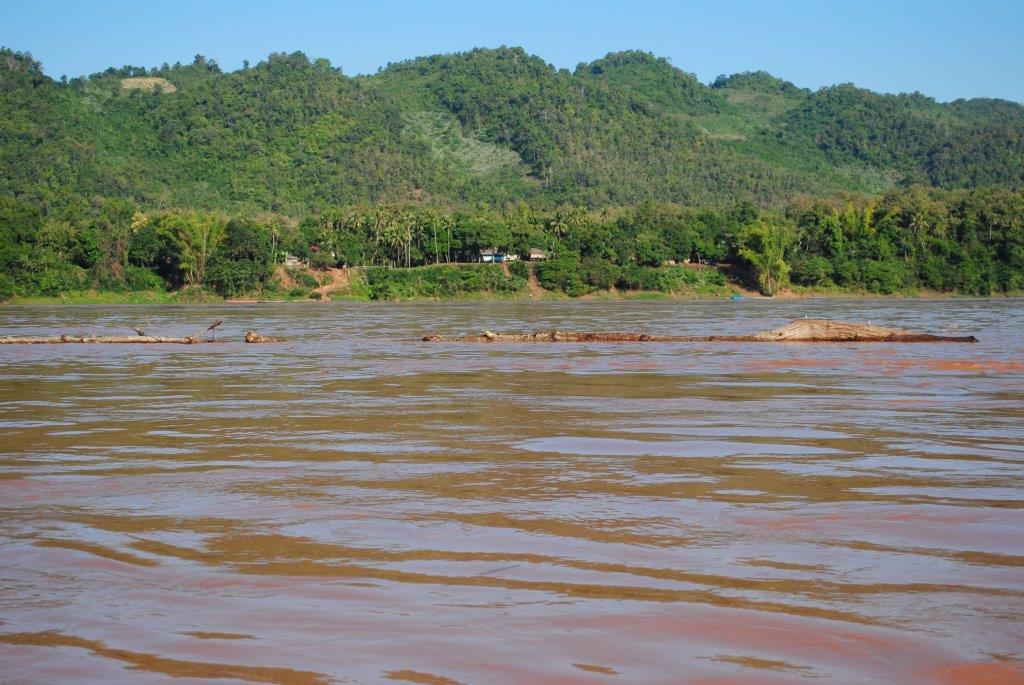 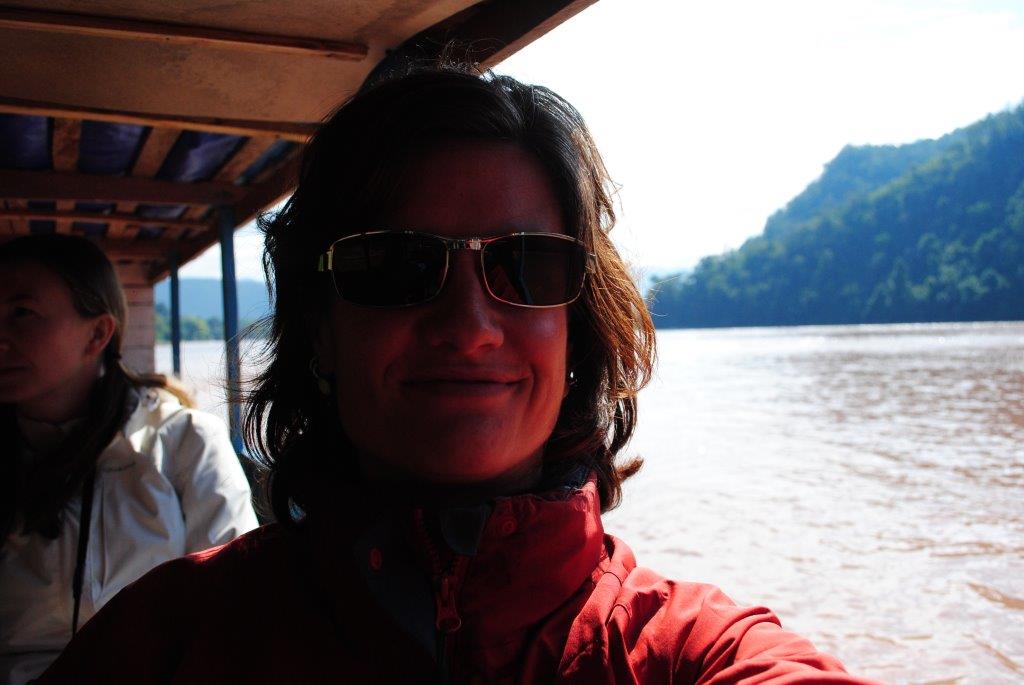 We stopped first at a whiskey village. I thought this might have been interesting, perhaps a makeshift distillery or at least an explanation of how the whiskey is made. Unfortunately, no such learning was available. We were given two shots of different whiskeys as we came off the boat and were then sent around the village to buy scarves. 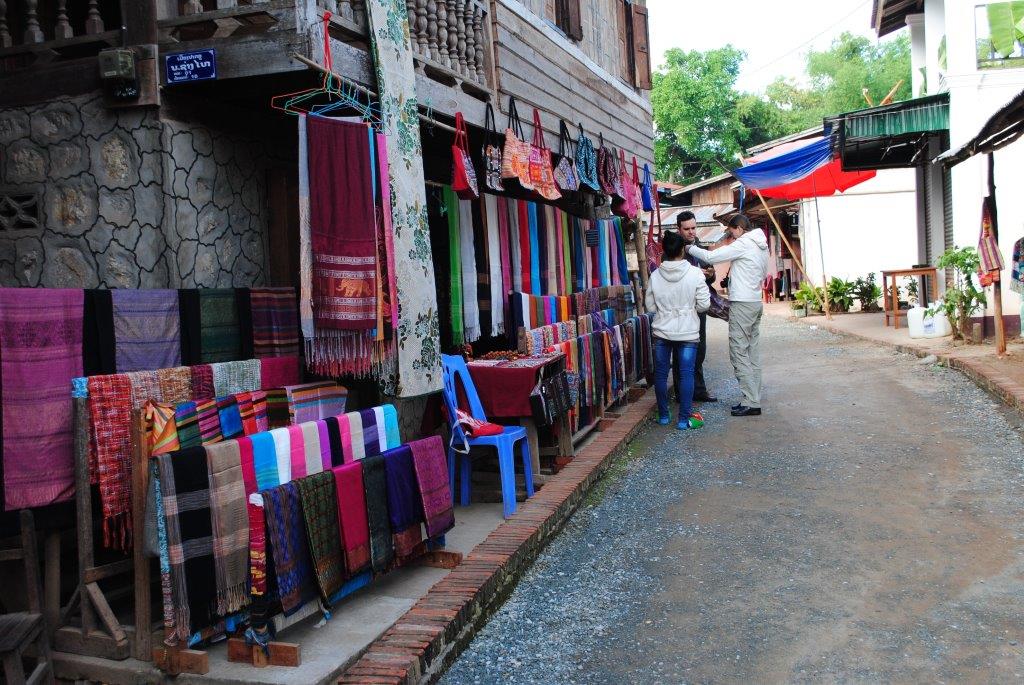 I saw some women hand weaving some fabric but, I’m sad to say that I’ve become cynical enough over the years not to believe that all the goods were handmade. At any rate, I didn’t have enough money with me to do any shopping so I spent our short village time chatting with the boat drivers, sharing more whiskey and eating Mekong beans cooked with garlic and oyster sauce. 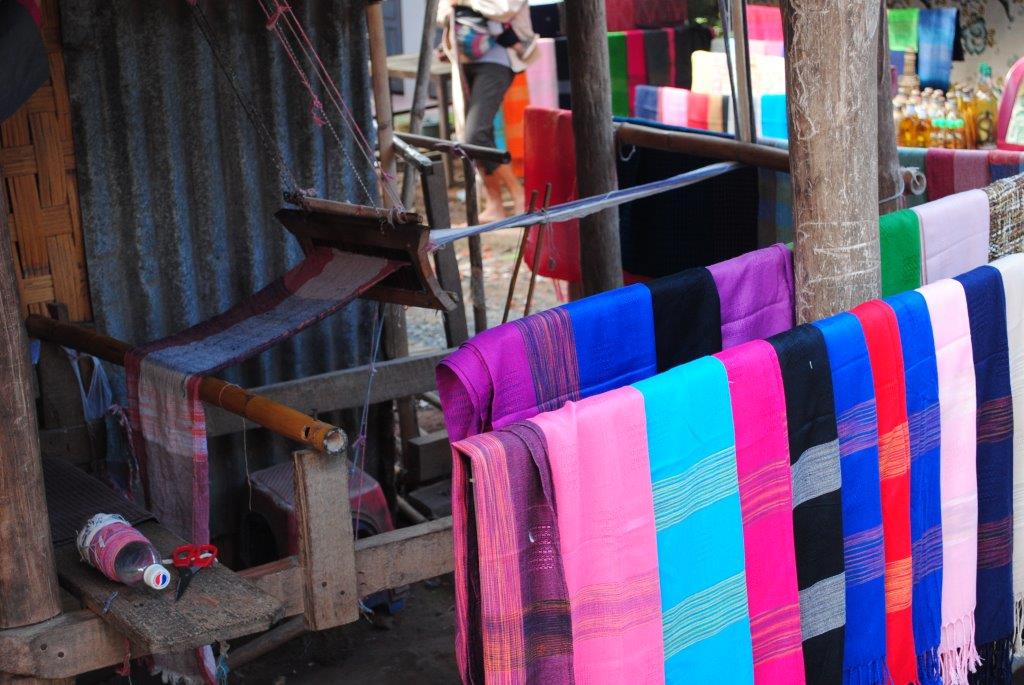 Although busy with other tourists, the caves themselves were quite peaceful. I guess everyone has gotten into the laid back Laos lifestyle.

The caves have had religious connotations for a long time, being first associated with a river spirit. From the 16th century, when Buddhism was widespread, the Royal family and people in Luang Prabang went on a yearly pilgrimage to the caves, leaving behind thousands of sculptures and carvings. There are now more than 4000 images, mostly made from wood or tree resin and coated in red or black lacquer and gold leaf. 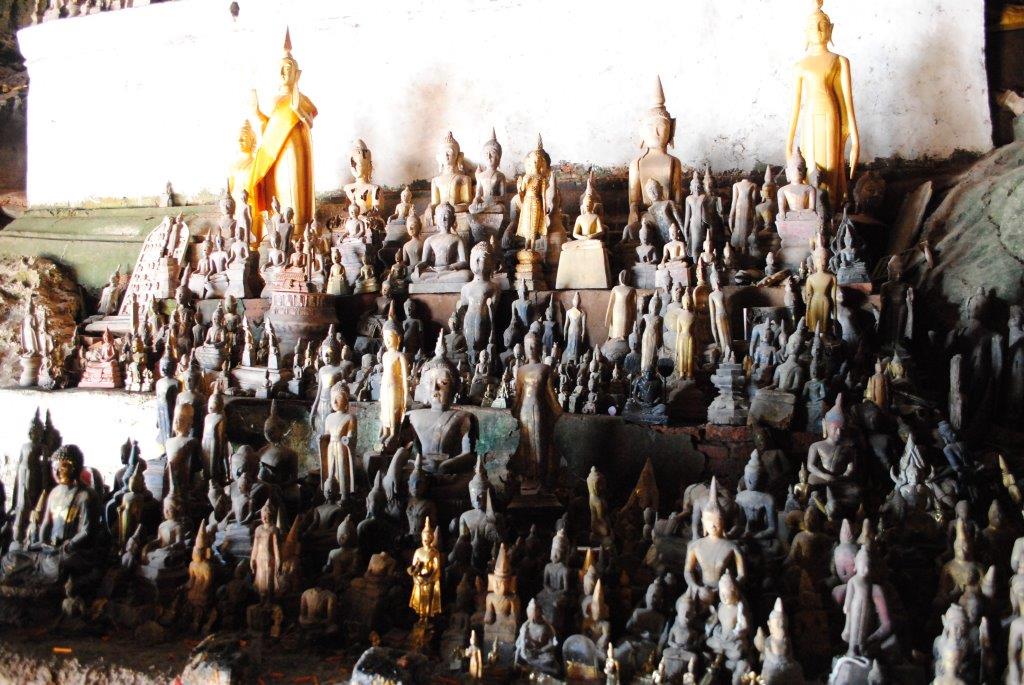 The lower caves is 60 metres about the river level and holds over half the Buddhas. The upper caves are a steep walk up some stairs, which left some unfit people breathless (not me though, thanks to the Marcothon!). 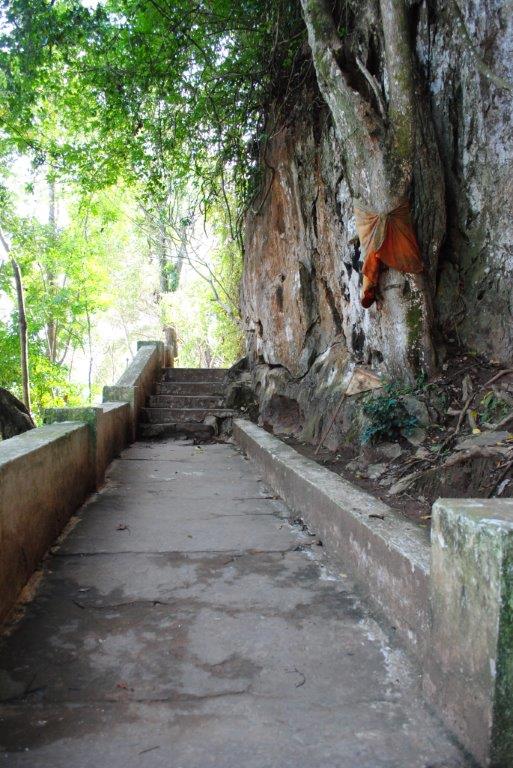 They get steeper around the corner

The upper caves is 54 metres deep and can be quite dark at the back. Guidebooks recommend you take a torch. I did but actually you can see quite a bit, between the candles and the flashes of cameras and phones. The lack of sunlight penetrating the rear the of the cave adds to the atmosphere. I tried to lose myself in the dark and become absorbed by the atmosphere but it was a little difficult with flashes going off every 10 seconds. 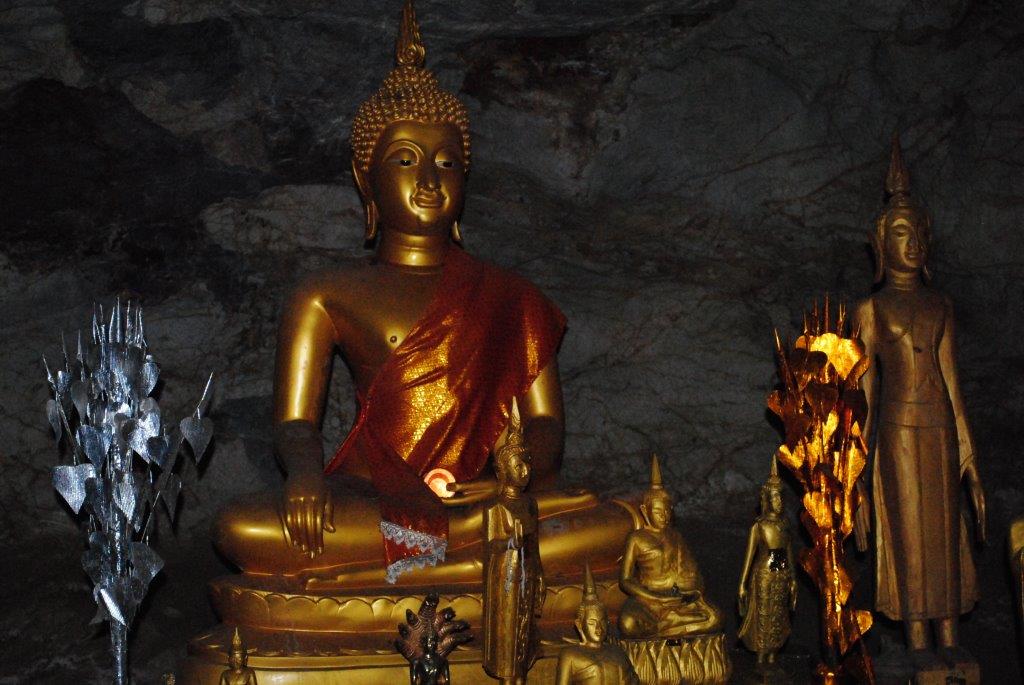 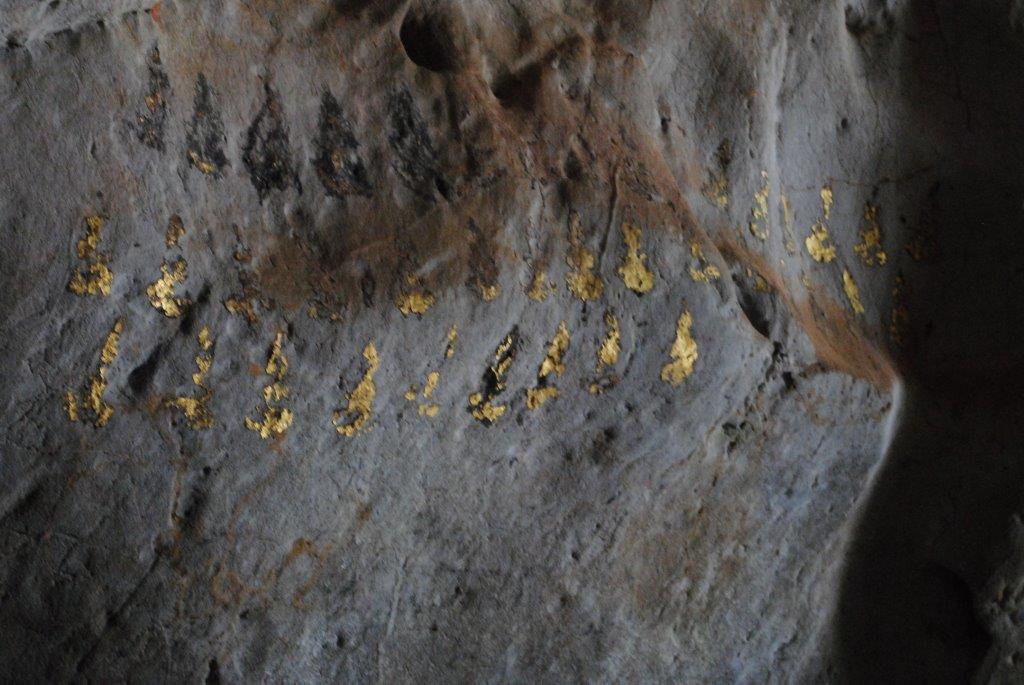 The next day Barry decided he’d had enough of the laptop too so we hired some mountain bikes and took a trip into the countryside. First stop was a breakfast of fruit and fried dough at the colourful market near our guest house. 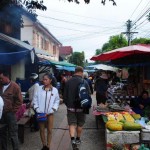 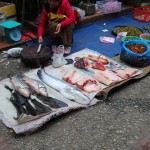 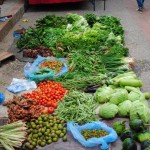 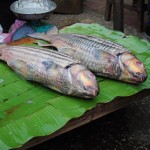 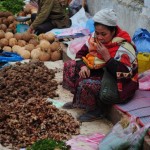 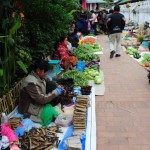 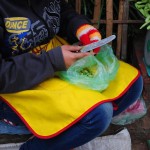 We headed out of town along the road to Kuang Si Waterfall. It was very up and down but not particularly busy with traffic. Very straightforward directions (basically it’s one road which you never have to turn off, just follow it’s windy trail). I could probably even have found my way to the falls by myself. There were some nice stops to rest our legs from the hills along the way too, but we had to look sharply for them. 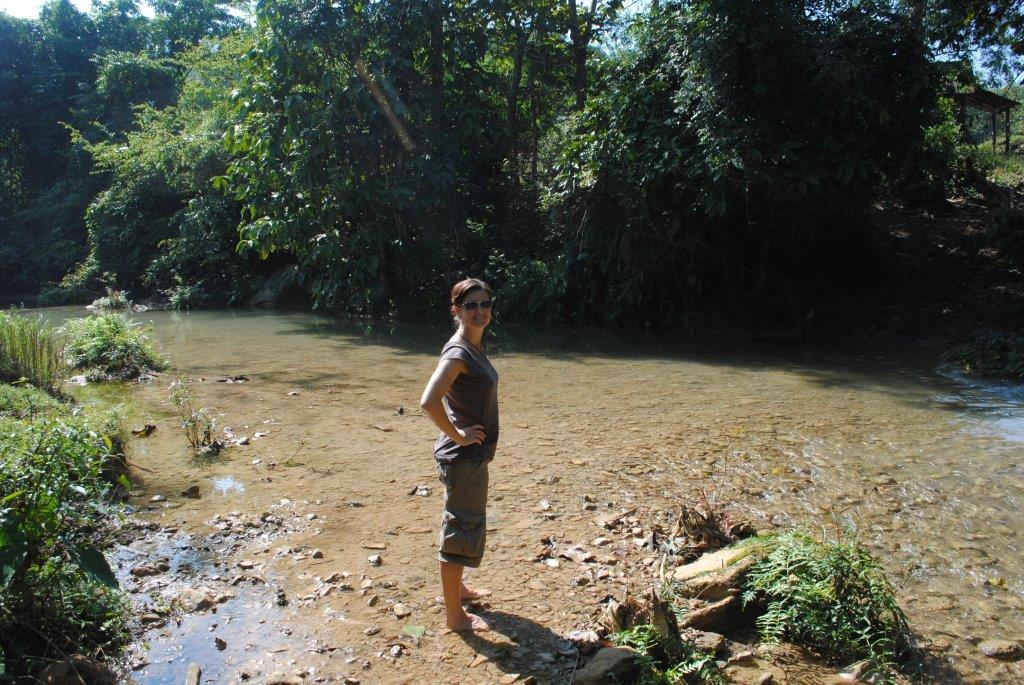 Kuang Si Waterfalls also houses a bear conservation centre started by an Australian woman in the 1980s. They house and feed bears which have been rescued from being cruelly kept in captivity, such as small cages or as dancing bears. They seem to be doing some really good work. 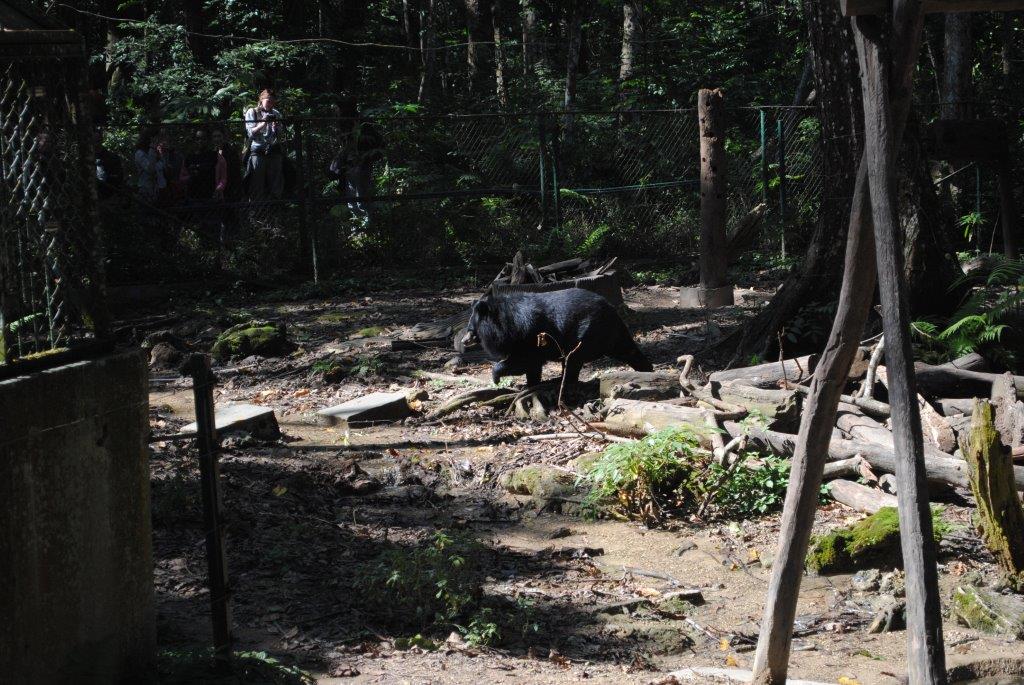 The waterfall is beautiful. The water so aqua that Barry was almost convinced that it was a fake waterfall. Definitely my favourite waterfall so far on my South East Asian travels. I only wish it had been warm enough to swim, the sun dappled water looked so inviting. 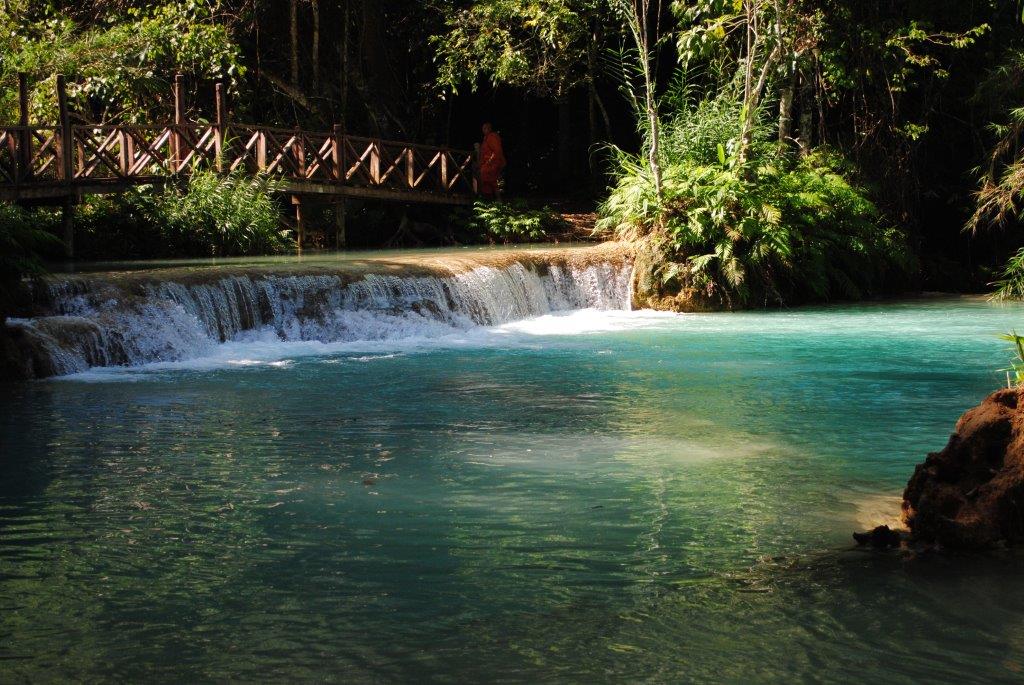 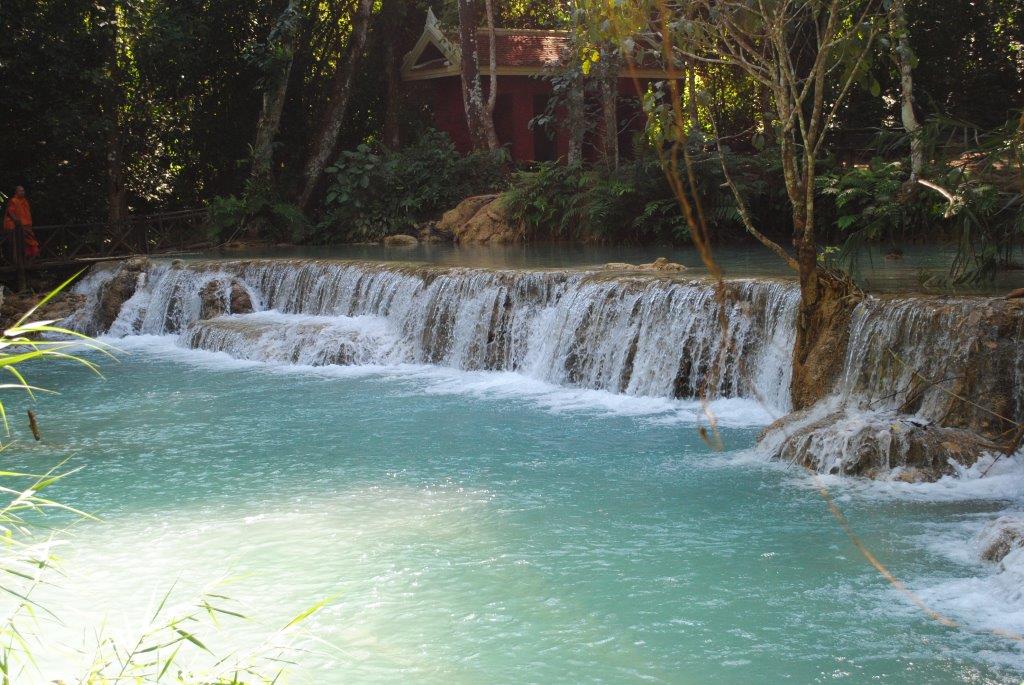 A narrow ‘trekking trail’ wound through the trees and looped around the different stages of the waterfall. 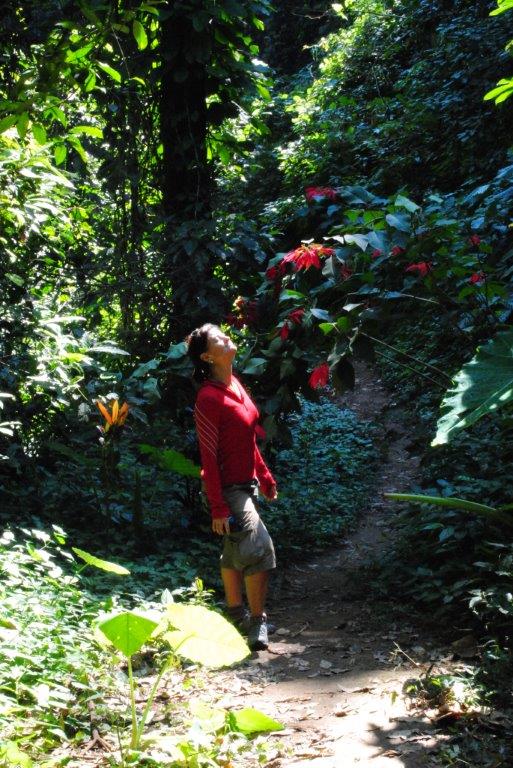 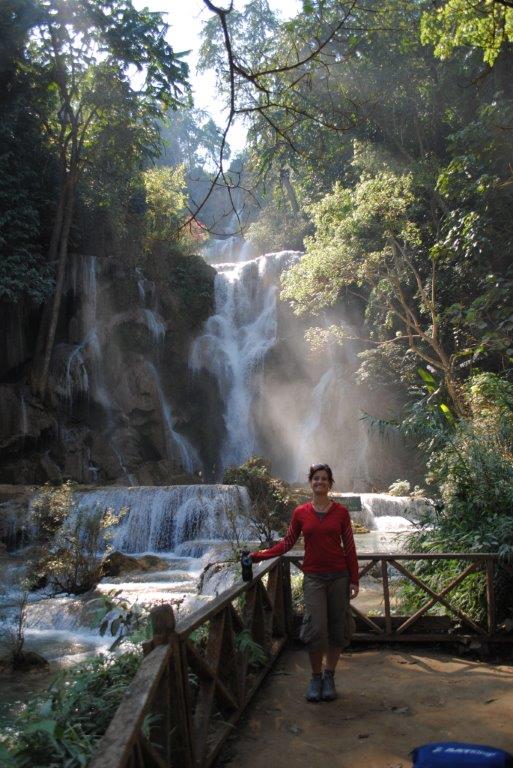 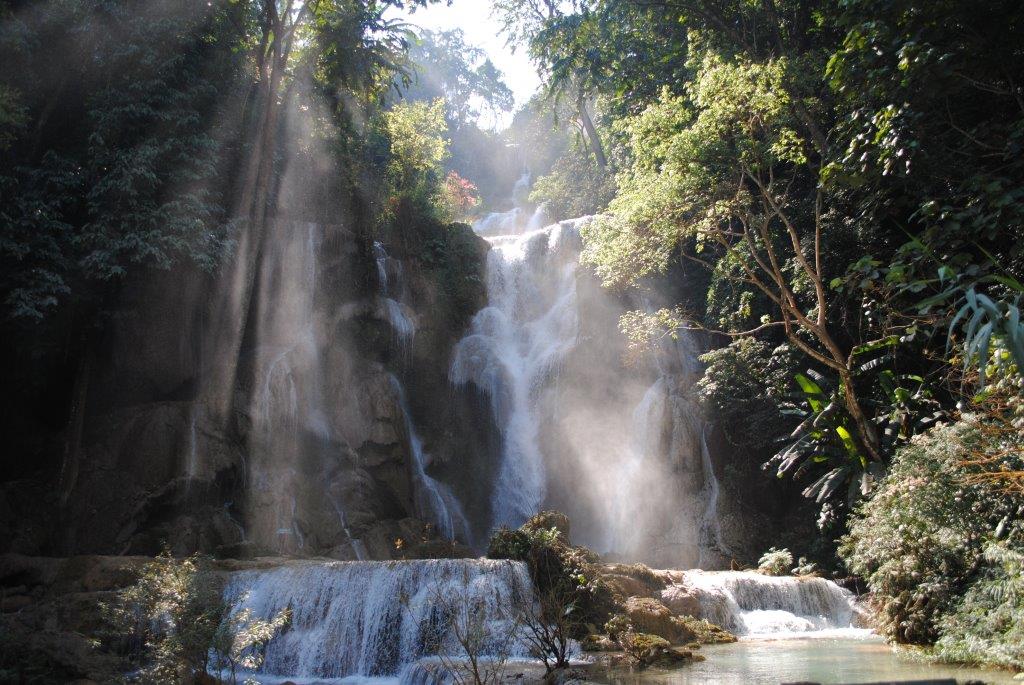 The waterfall was so perfect I wanted to print it on a jigsaw puzzle and give it to my mum for Christmas. 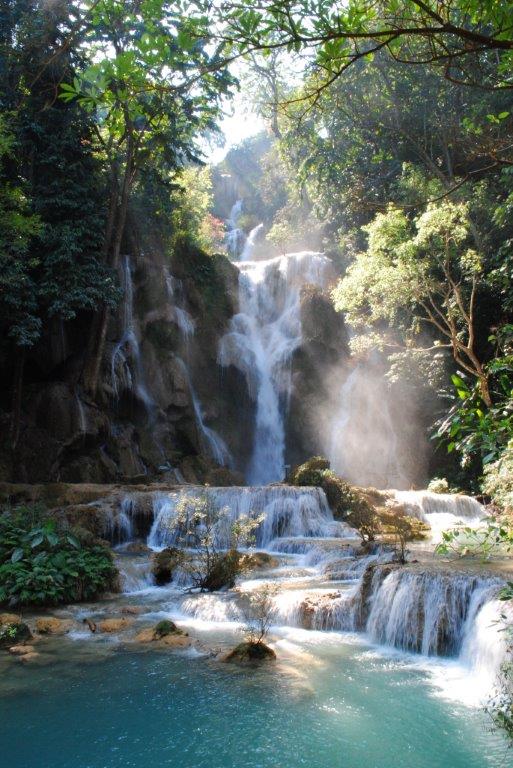 4 thoughts on “Caves and Waterfalls in Luang Prabang”