We left some of California’s most beautiful and green coastal parks to make our journey across the state to the Joshua Tree National Park. The road took us through the dustbowl, and the landscape seemed almost as depressing as I imagine it was in the 1930s when the Great Depression saw millions travel from Chicago along Route 66  to seek their fortunes in California. The more recent drought has hit hard and the landscape is dusty, dispersed with orange orchards and oil derricks. We stopped at a petrol station which seemed to be a homage to Route 66, James Dean and better times. The sign begging people to make a purchase left me with a sense of desperation.

‘I’ve been through the desert on a horse with no name…’ America’s lyrics rattled around in head as we rattled across the Mojave desert. Well, we weren’t exactly rattling in our large, modern Dodge on the smooth tarmac of a dry climate but I imagined the wagons of the wild west rattling along it. 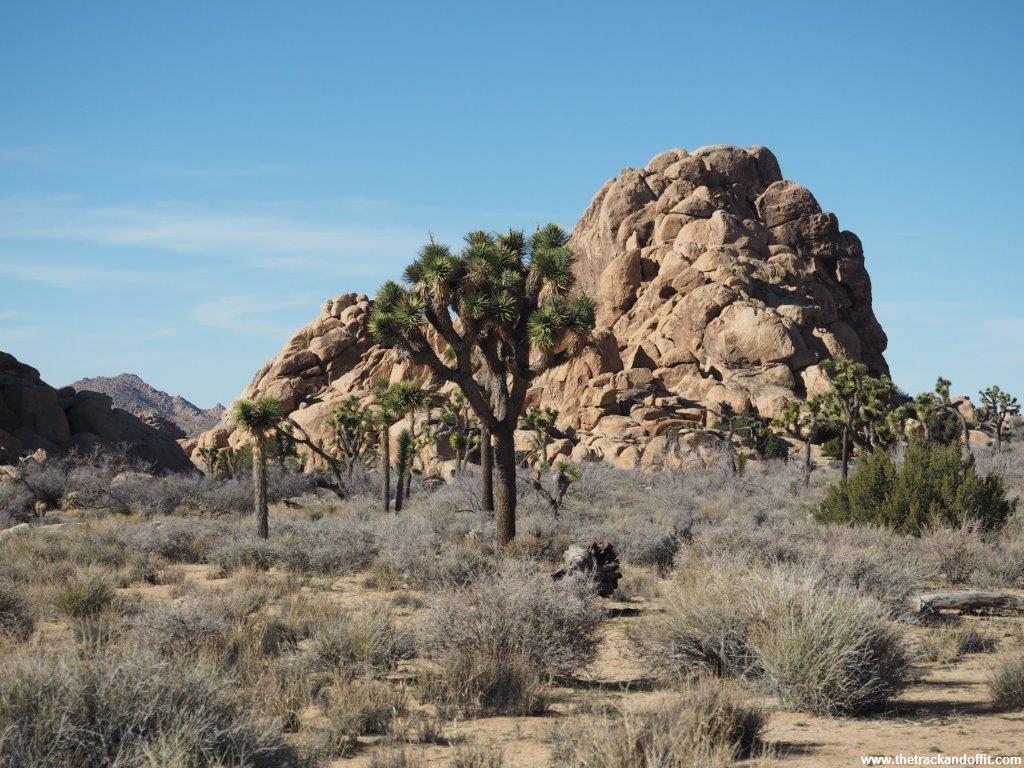 It’s a rocky desert, not a sandy one.

Joshua Tree town is a simple place. The shops (a couple of supermarkets, a camping store, a Thai restaurant, laundromat and a surprising number of beauty parlours) line the highway, the main road into, and out of town. There’s also one saloon bar of the wild west variety. It was actually quite fun and the 14 craft beers on tap were pretty surprising.

The main draw in this town is the Joshua Tree National Park. 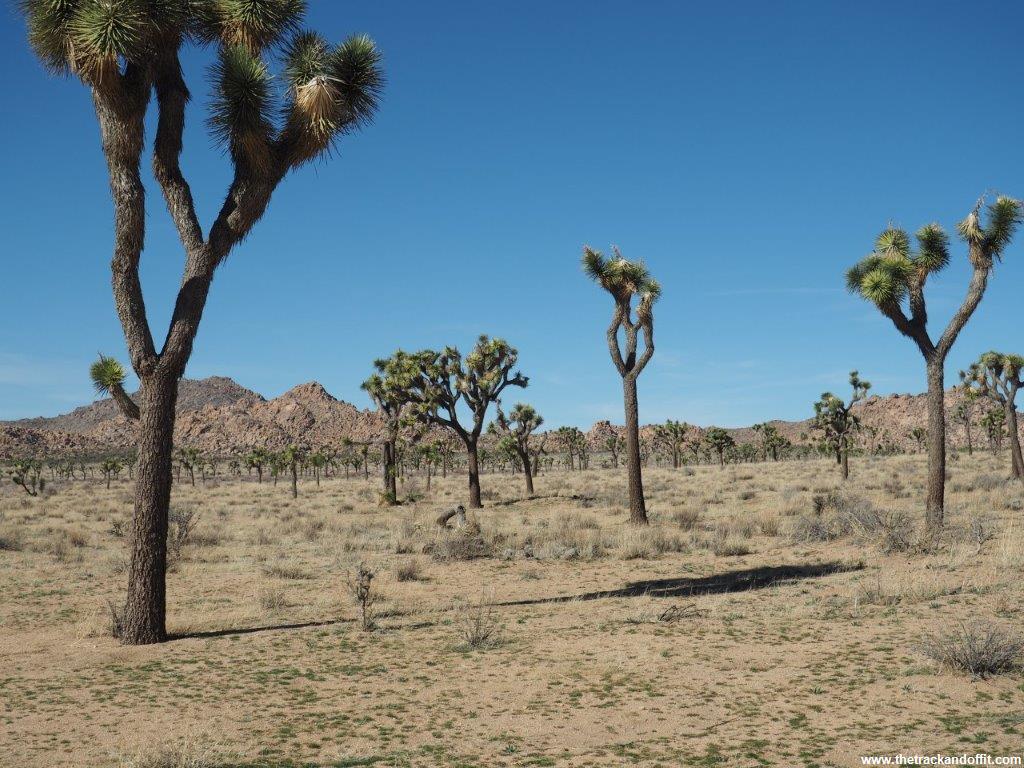 The Airbnb place Barry’s parents found for the week was in a nice little complex of a half a dozen properties and kitted out in a 1950s Cold War style. I kind of liked the groovy decor. We also liked the outdoor spa. Barry’s parents especially loved the sunshine. Clear skies for every day we were there.

After three days of not much internet, Barry was having withdrawals so we quickly fell into a routine of working in the morning, lunch at the house and a hike in the afternoon. The entrance fee for the Joshua Tree National Park is $20 per vehicle for seven days and we certainly got our moneys worth, visiting every day. There are a huge number of different walking trails to explore and I think we saw almost every corner of the park. 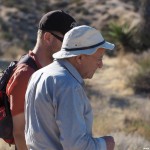 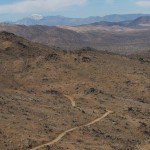 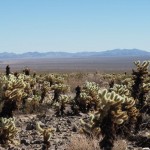 It turned out to be a good thing that we were staying awhile in the area. On the first day I tried to stand up and found that my lower back had seized up and I could barely walk. Well, walking was fine, sitting and standing not so much. So Barry spend the mornings working and I spent the mornings being unproductive, either lying down or strolling about outside, with an icepack on my back.

We took my mind off it by heading into the Joshua Tree National Park. Joshua Trees are a type of Yucca (yucca brevifolia) with lots of long arms. They’re a lot bigger than a pot plant my sister got for Christmas. They were named as Joshua trees by a group of Mormons who thought the arms of the tree were like the biblical Joshua in prayer, or calling folk to heaven (not sure how many arms he was supposed to have). They are pretty awesome trees. 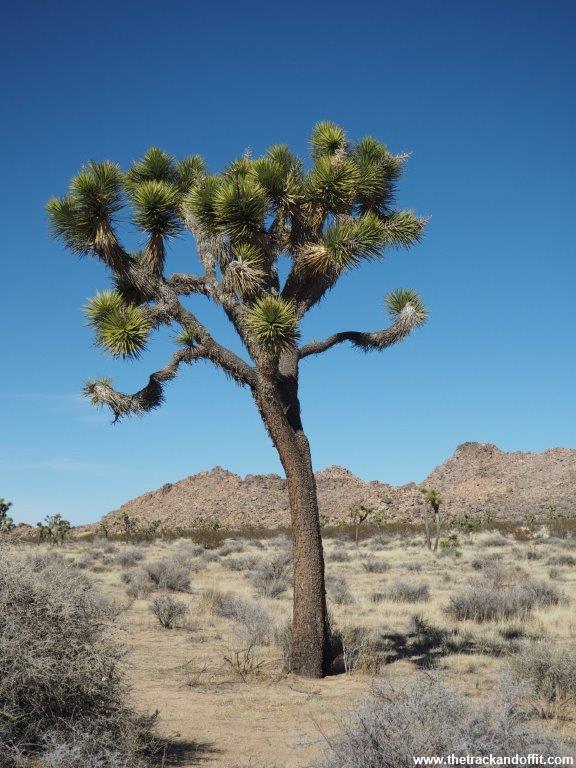 Our first trip into the park revealed trees, rocks, rock climbers, some dirt road driving and a short walk into the Hidden Valley, where cattle rustlers used to hide their stolen cows. 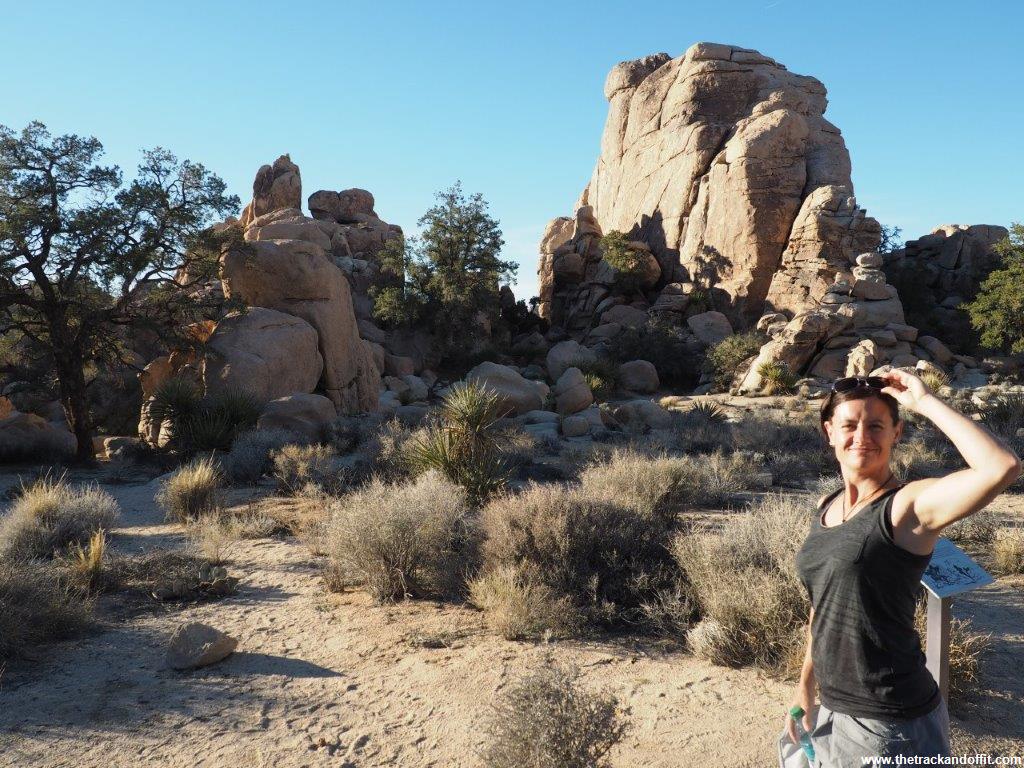 I’m also convinced I saw a dusky chipmunk but s/he was very fast.

The Oasis of Mara walk showed us how much the water table has dropped. It used to be a thriving area, now there are some palm trees, cactus, but no standing water. There is enough to keep some birds alive, and a cute little cottontail rabbit. 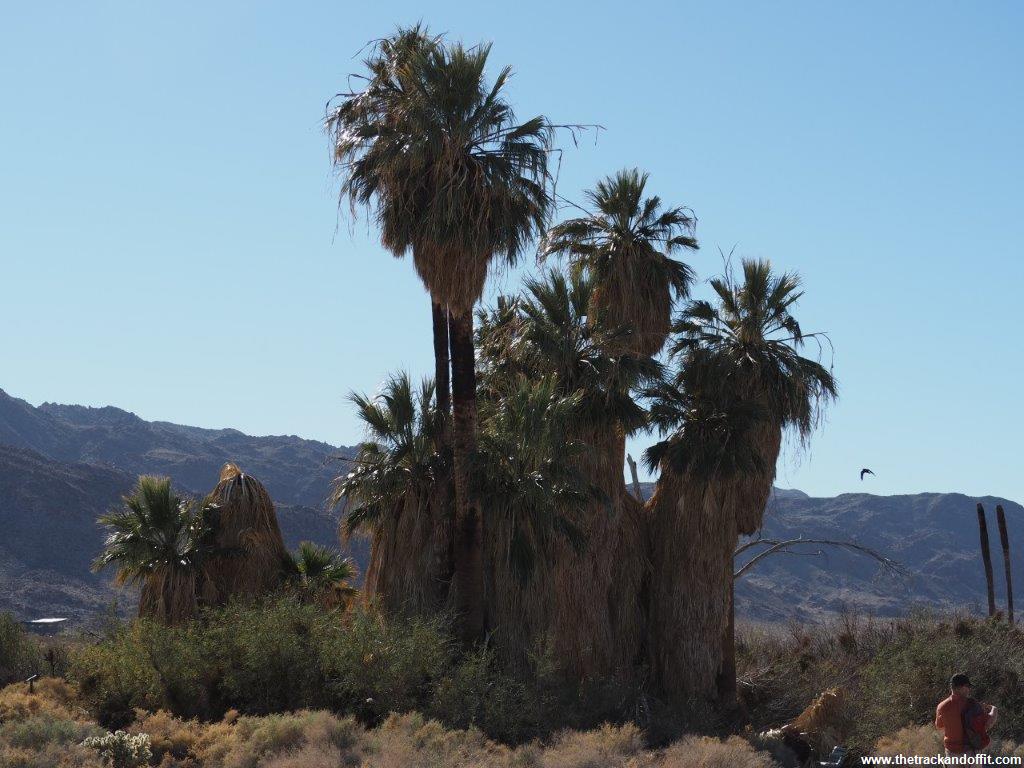 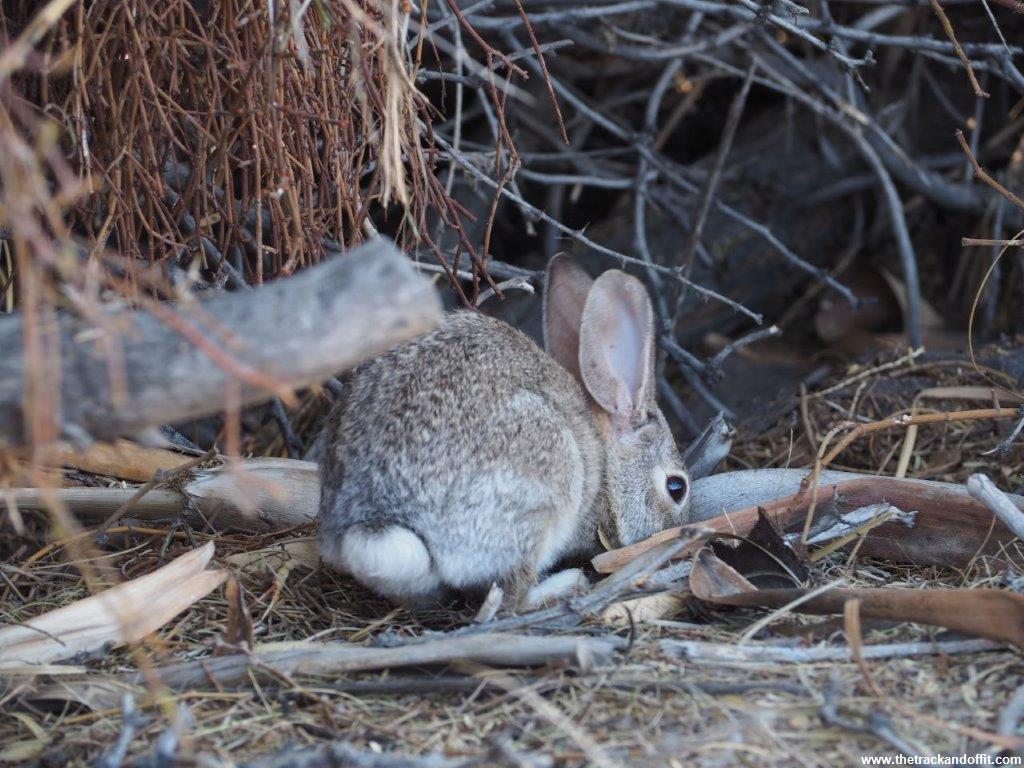 The walks seemed to help my back a bit so we went on a much longer hike to the Lost Horse Mine. The story has it that the gold mine was found when a dude was looking for his lost horse. The dry desert air seems to preserve things really well. I think I could have just hooked up the machinery right there and started mining for gold. But it’s a long walk in uphill and I was pretty tired by the time we finished so I probably won’t be moving out there any time soon. 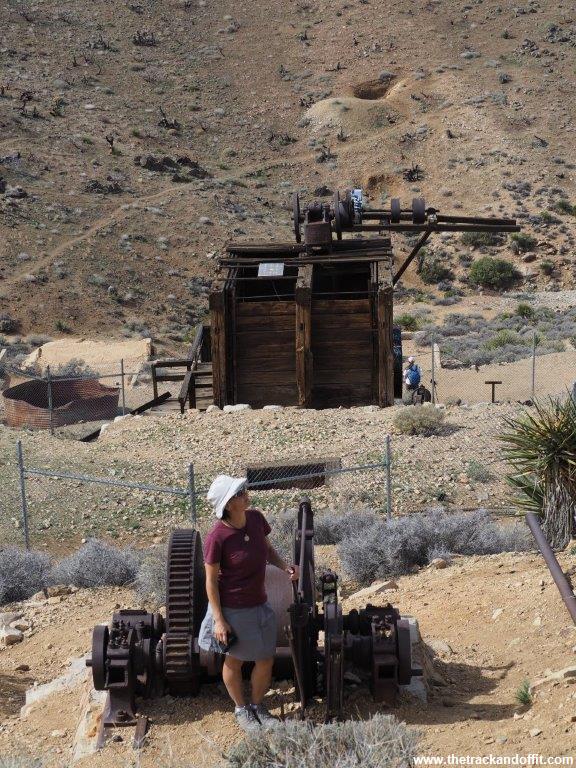 Our hike to the 49 Palms Oasis was more successful than Mara. Harder to get to but worth it. The trail snaked through a desert area full of red barrel cactus and eventually revealed the oasis nestled near the dry desert hills. It was more my cartoon idea of an oasis. And there was still water. I’m pretty sure there were 49 palms as well. 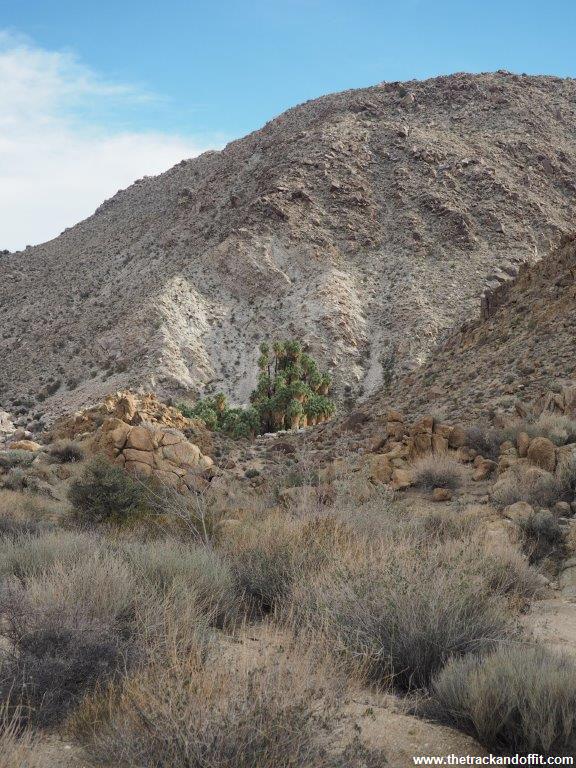 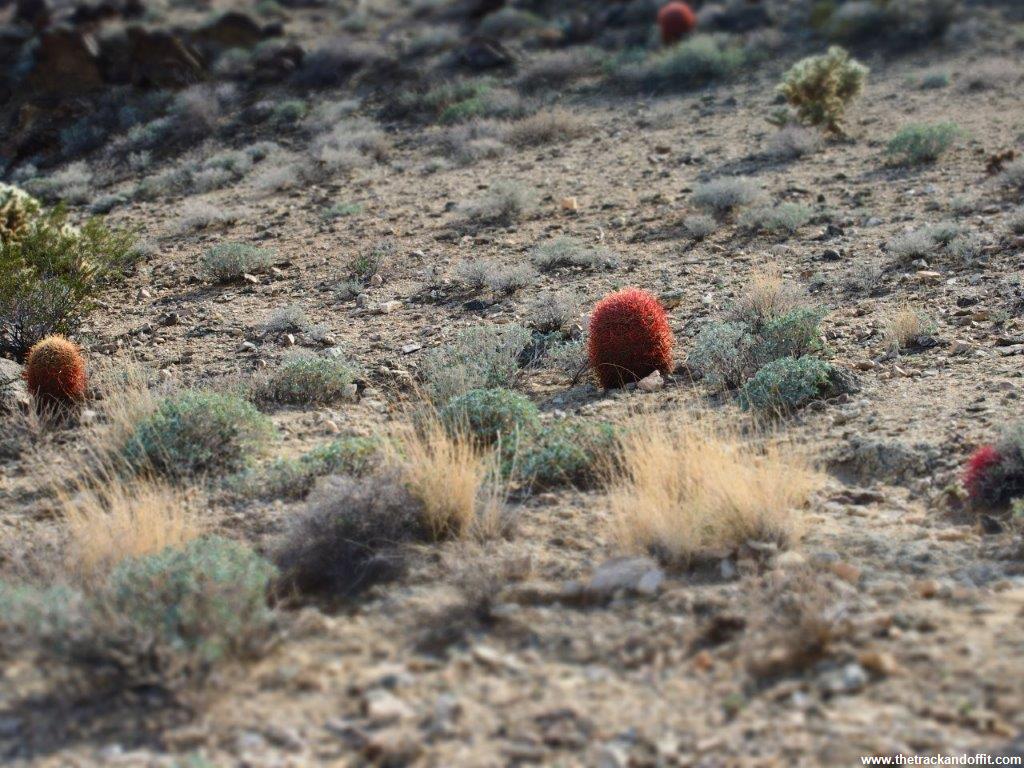 Another hike in the hilly Western section of the park at Black Rock Canyon, where we saw a coyote on the edge of civilisation, sorted my back out and by the time we left for San Diego I was moving more freely. 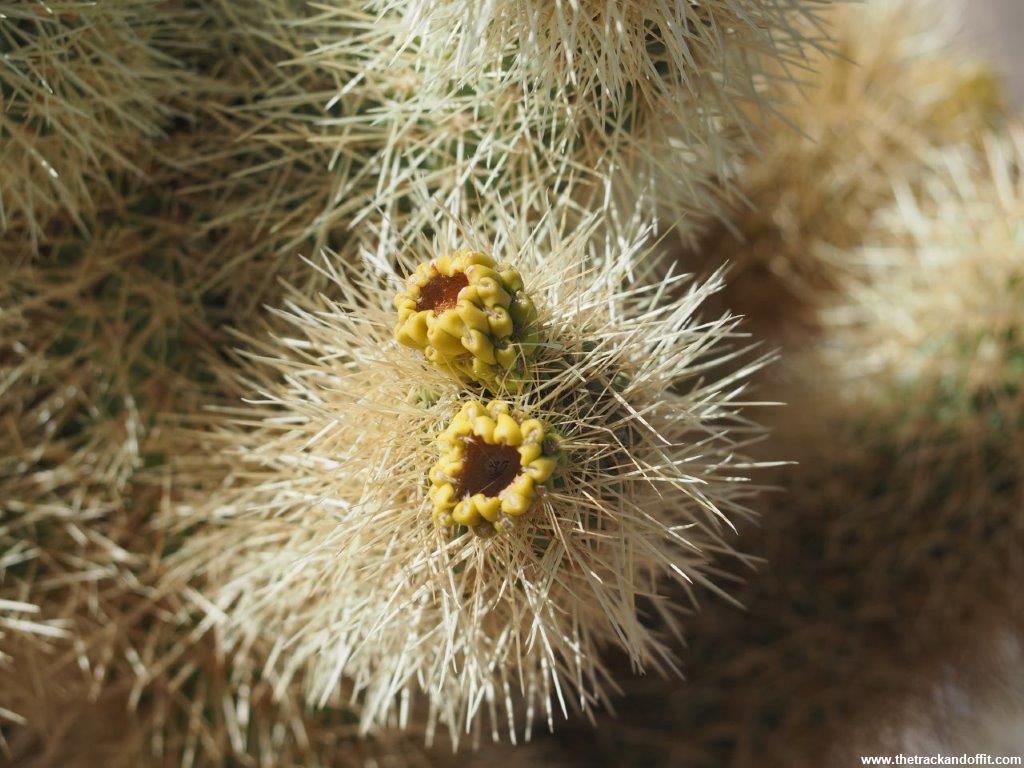