I love the geothermal hot springs in Iceland. I found the glaciers even more captivating.

It was an adventure to reach our first glacial lake. We almost missed the small turnoff from Route 1 into Heinabergsjokull in the Vatnajökulsþjóðgarður. About half way along we realised we probably didn’t have vehicle robust enough to deal with the track. Lots of gravel, lots of mud, reasonably deep puddles. Not seeing any other vehicles also made us question our decision. Nevertheless we persisted.

With no other human activity around glacial lake that seemed to rise out of the mist of the morning light was magical and quite ghostly.

Eerily, empty kayaks drifted in a lazy circle. Presumably abounded until the summer. They seemed safe enough in a lake of ice. 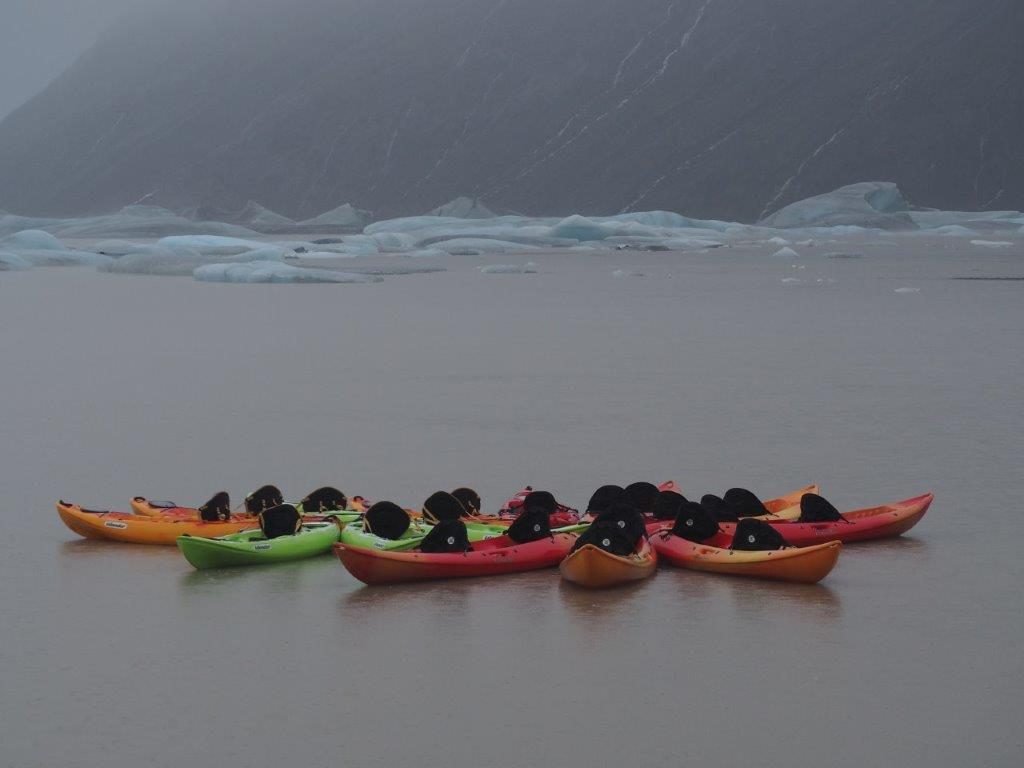 Through the mist, we could barely make out the tongue of the glacier. More impressive were the pieces that had broken off and now float peacefully in the calm, still waters of the glacial lake. 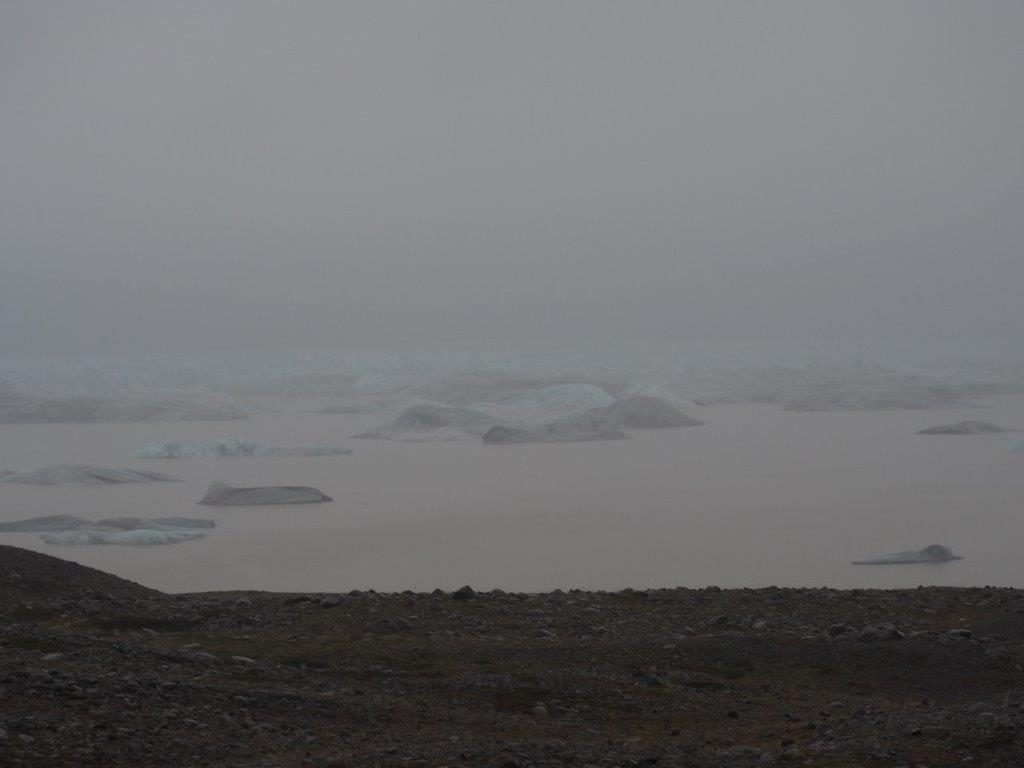 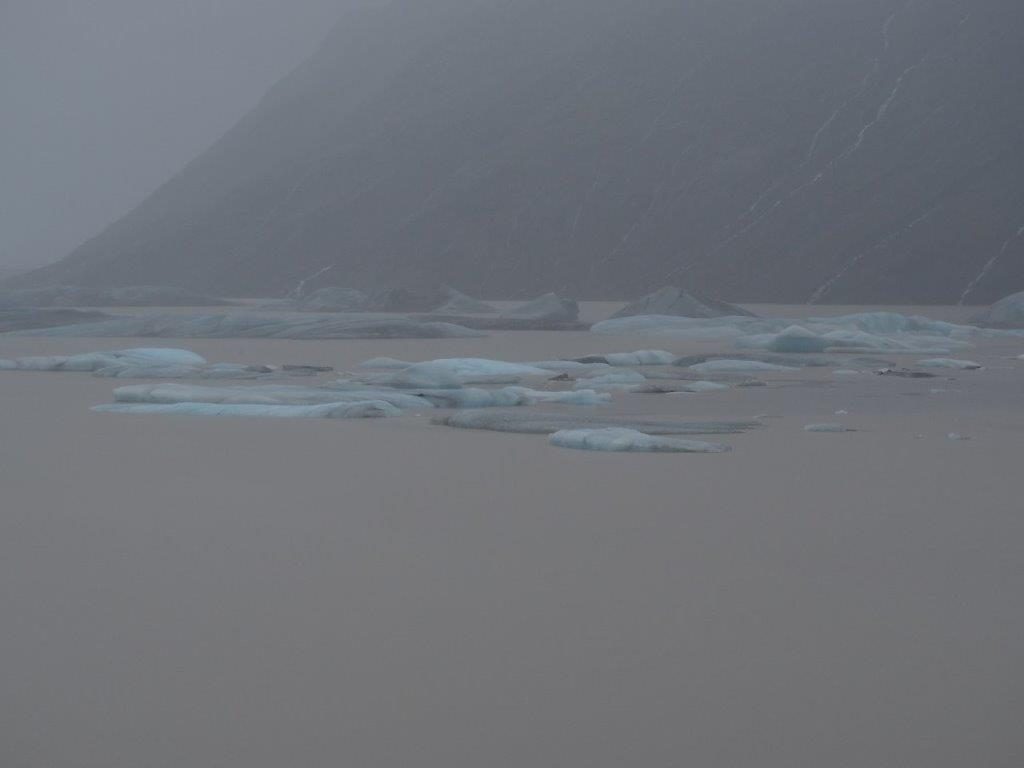 Further along the coastal road is Iceland’s glacial lagoon, Jökulsárlón. Believe it or not the light had improved and it was easier to see the mini icebergs, breakaways from the Breiðamerkurjökull glacier. Julie and I spent mesmerising hours watching these floating sculptures. The black streaks in the deep blue ice is volcanic ash. 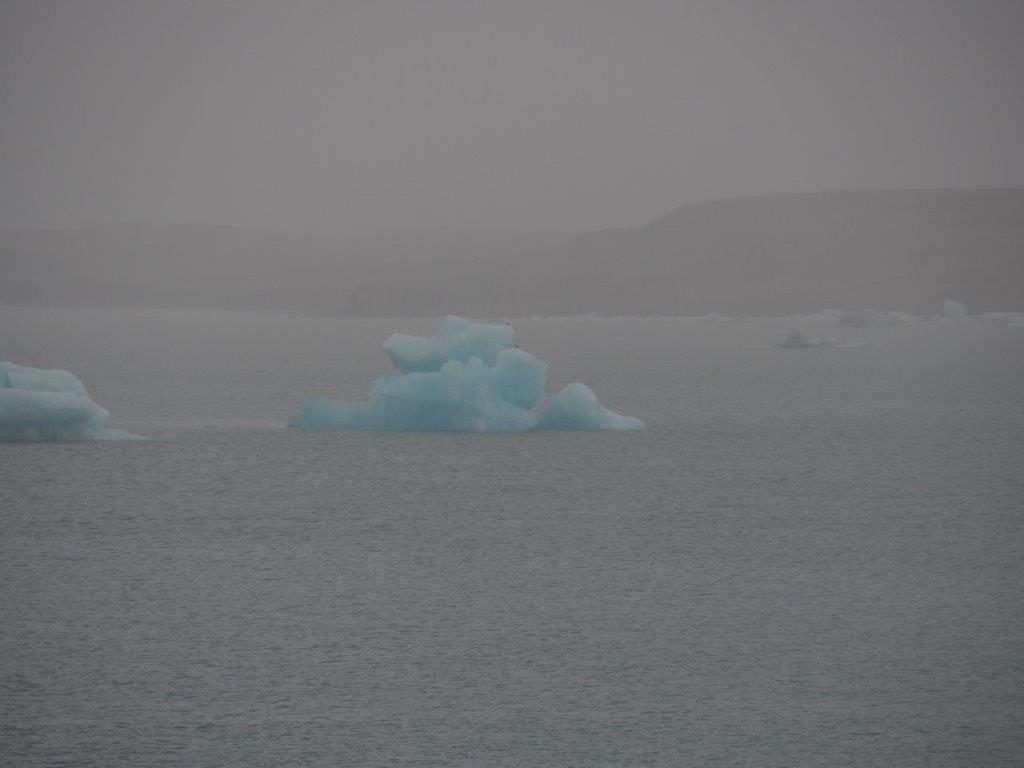 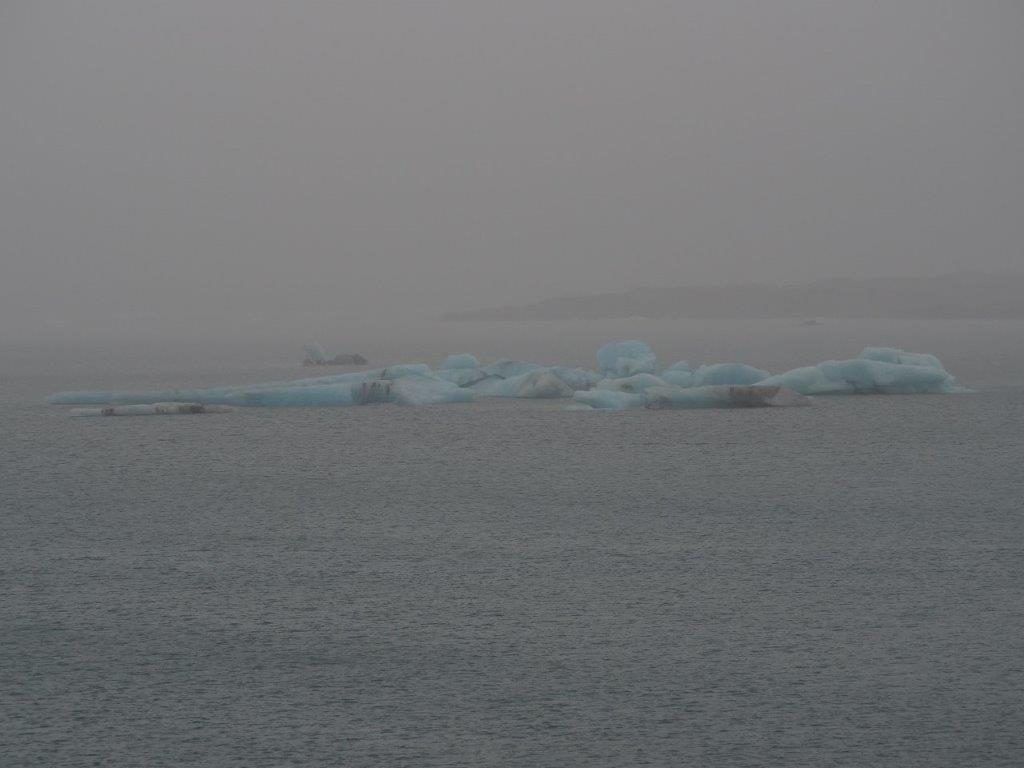 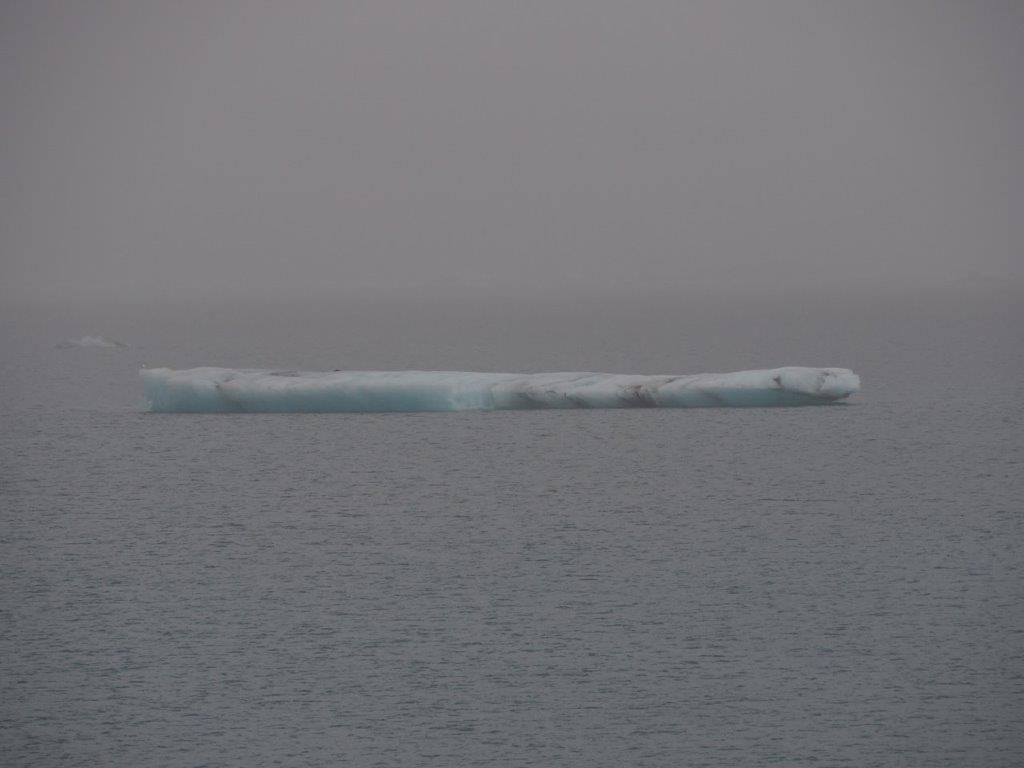 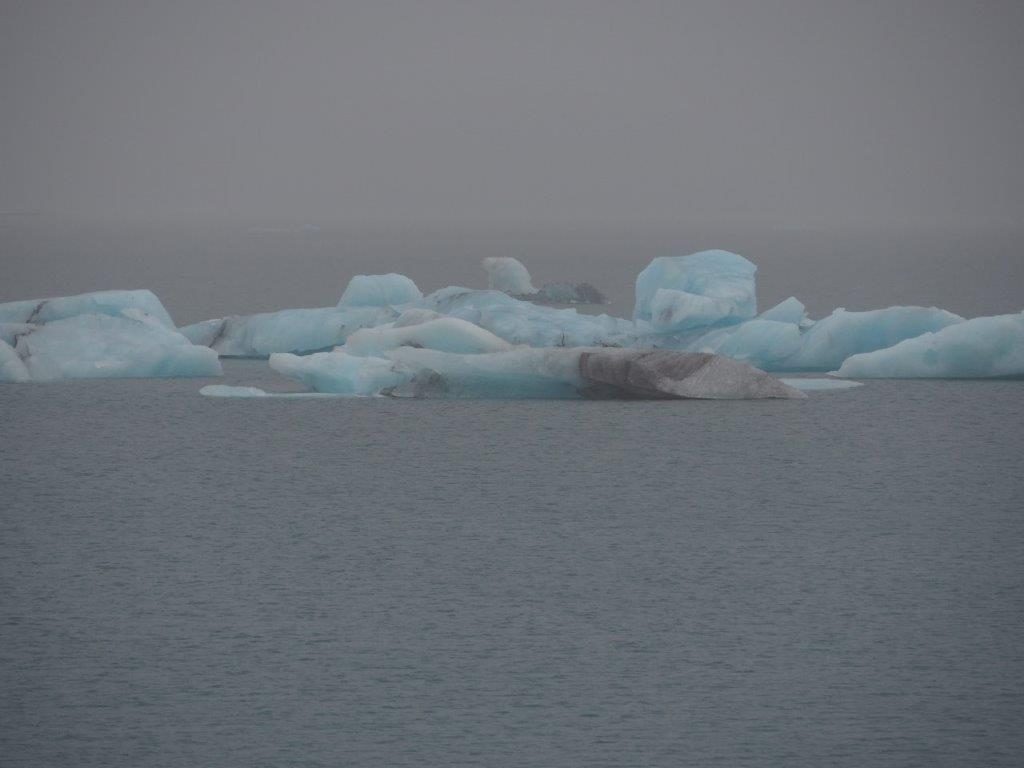 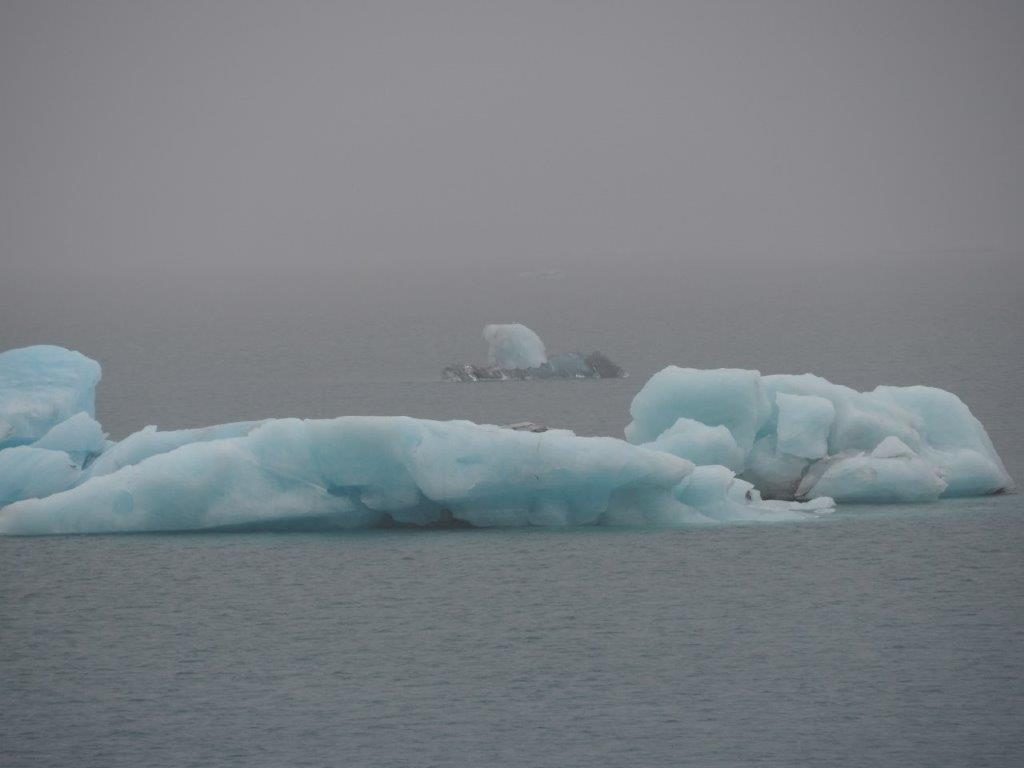 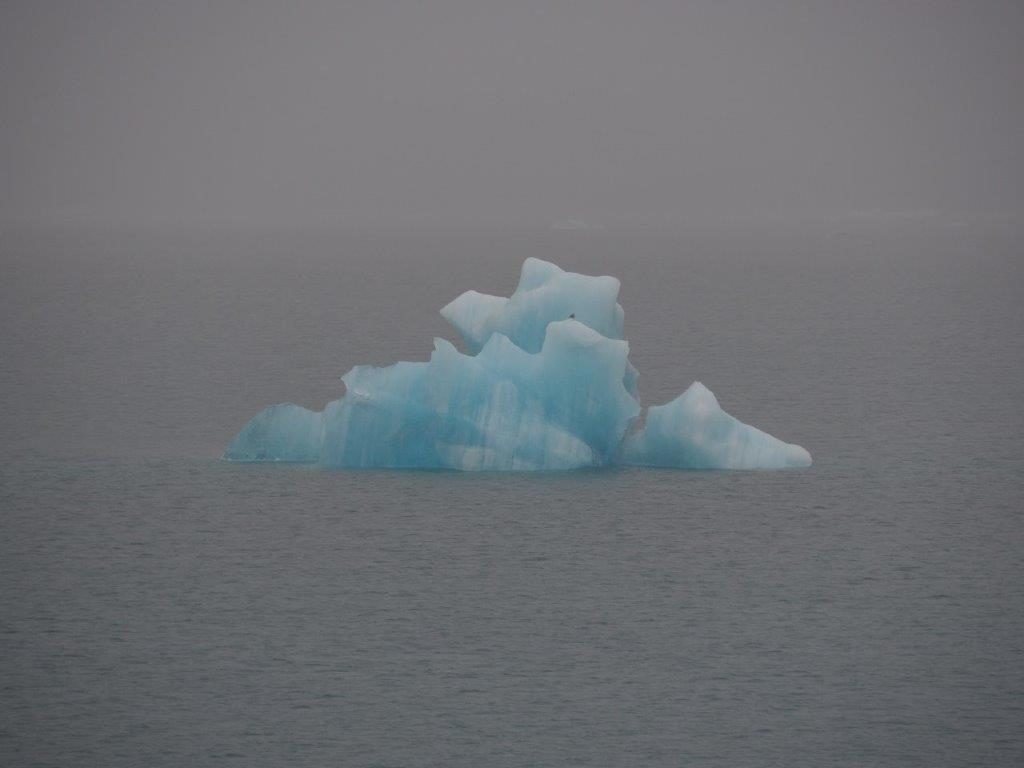 A teddy bear waving from behind a rock? 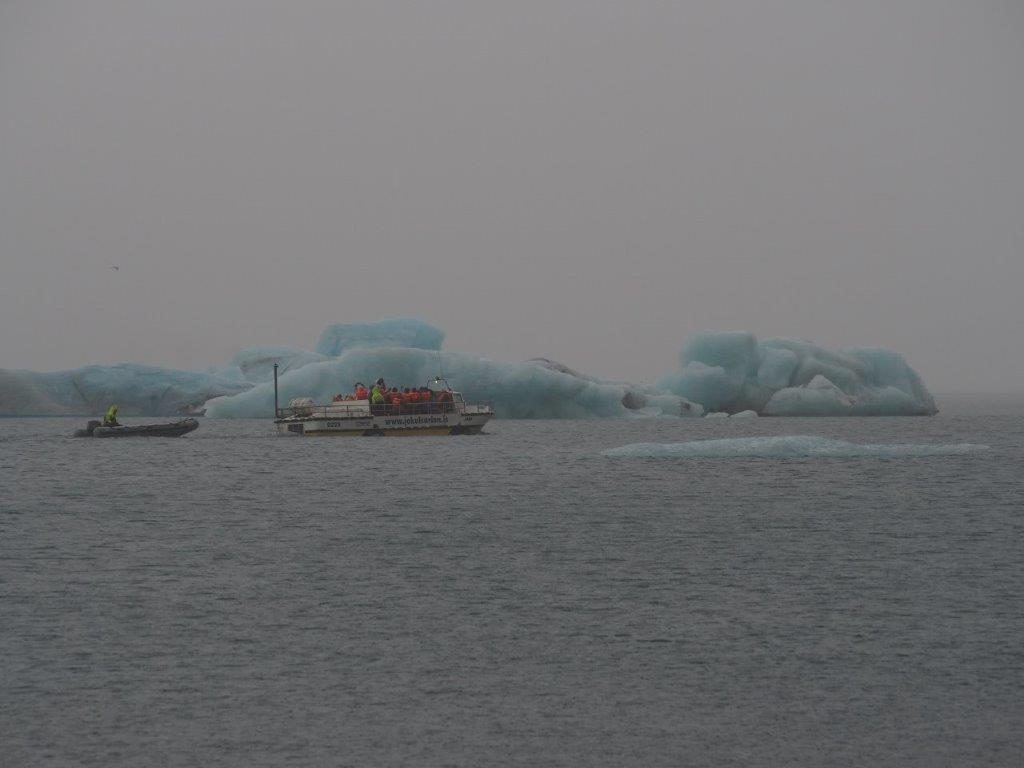 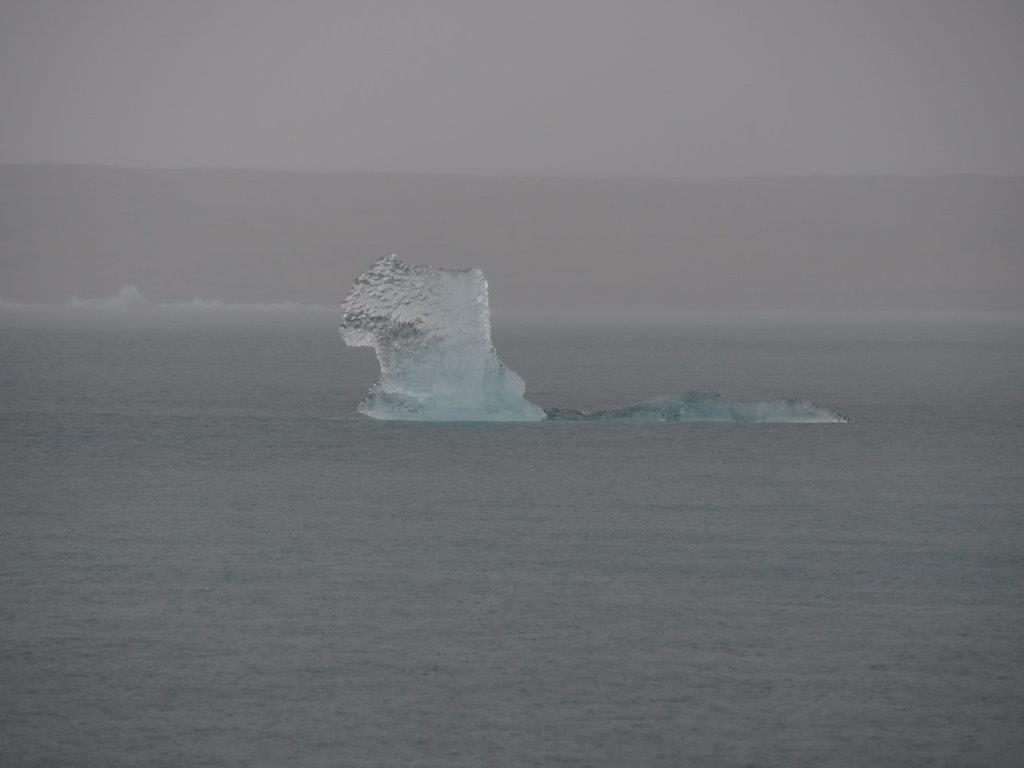 A bit like the Loch Ness Monster. Ice Nessie? 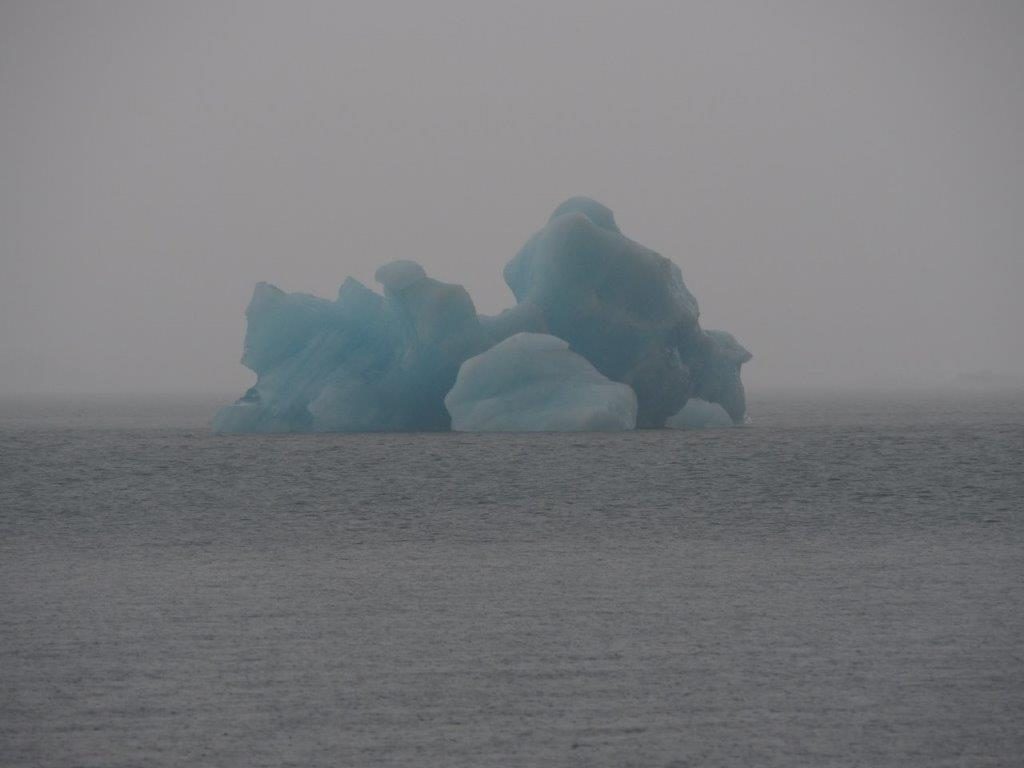 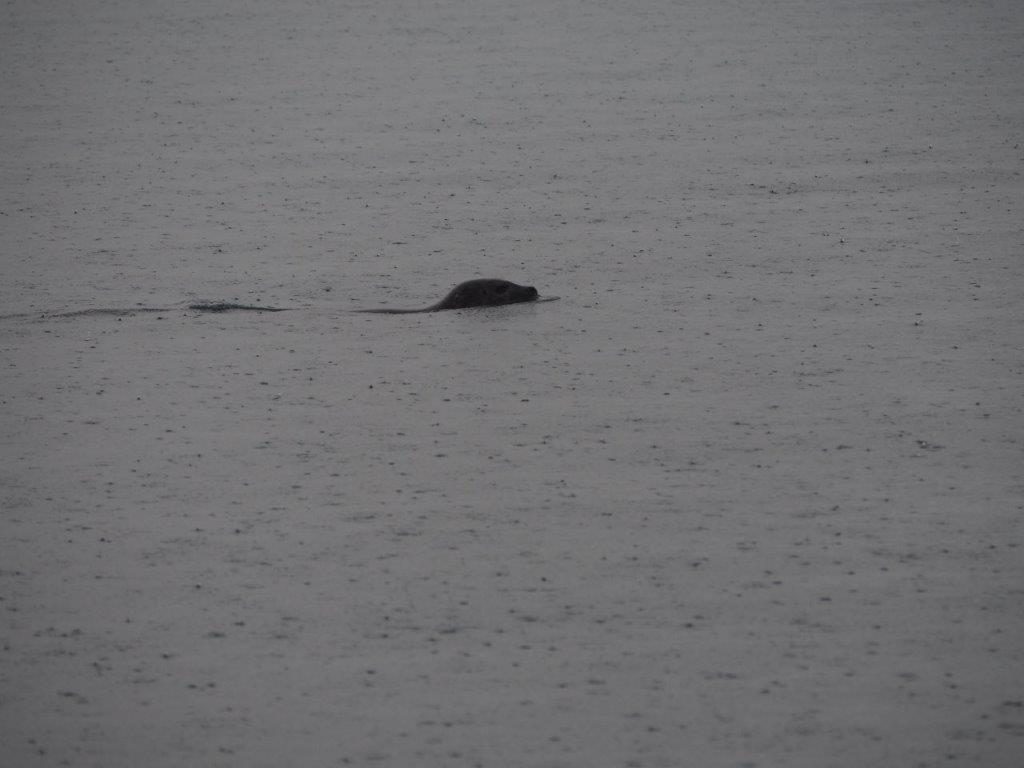 You can walk along the shore and spot seals. In the pissing rain. We did. And got soaked. But worth it.

We were so miserable after being drenched while glacier-berg spotting that we thought about just driving along, the ultra heated van, warming up, maybe pulling up somewhere along shore of the lagoon more private than touristsville, probably eating a picnic lunch in our pants while our clothes dried out.

As soon as we drove across the road though our plans had changed. We’d completely forgotten about the black sand beach. When the chunks of glacier melt to a smaller size, they travel along the river and out to sea, where they bob along in the waves. 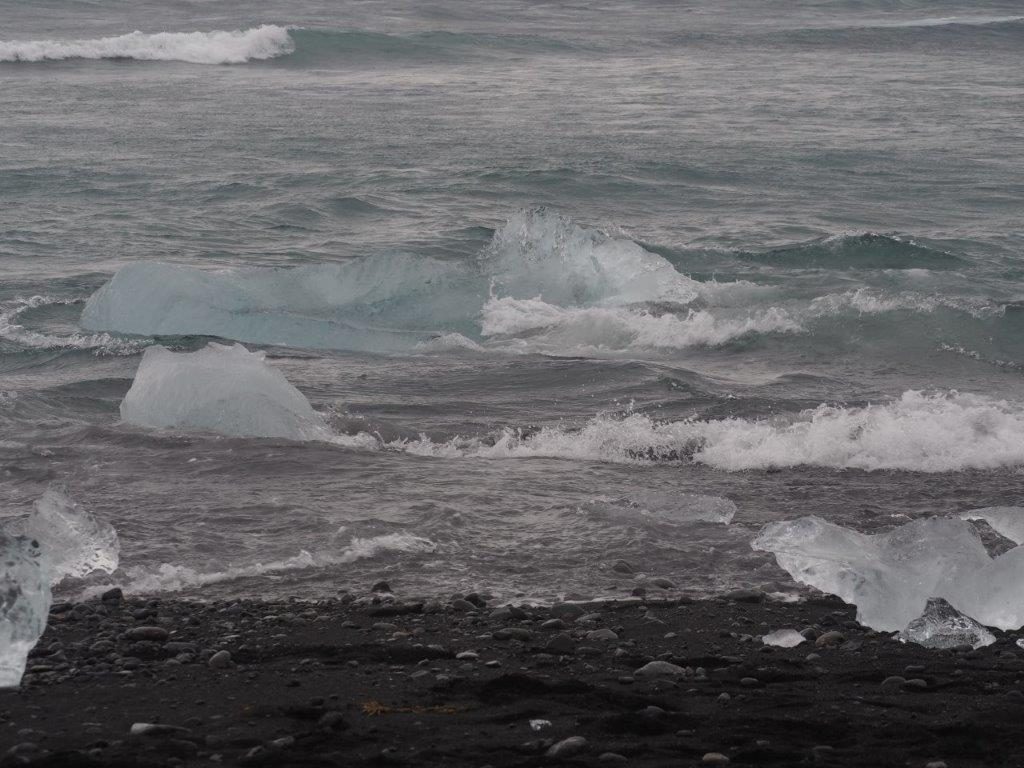 Some melt, some eventually wash up on the black sand shore, glittering like diamonds. 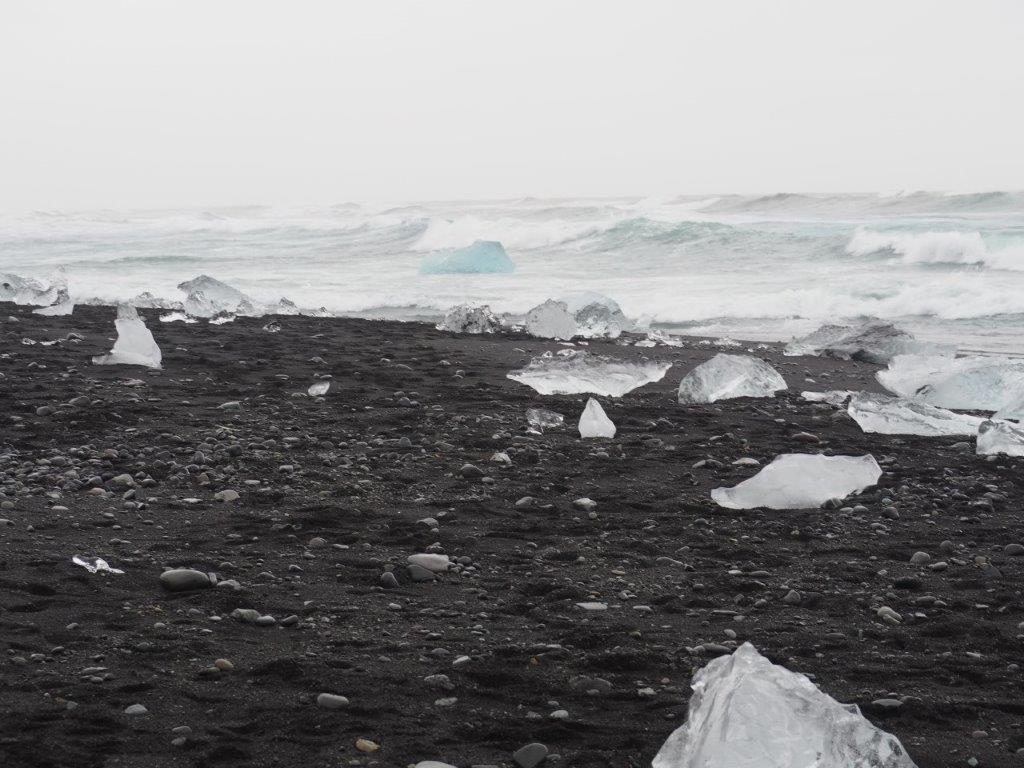 Our discomfort set aside (and Julie put her PJs on for modesty – I was still wearing my leggings) we abandoned the cosy van to play amongst the ice on the sand. We were so happy (such a change from moments before) 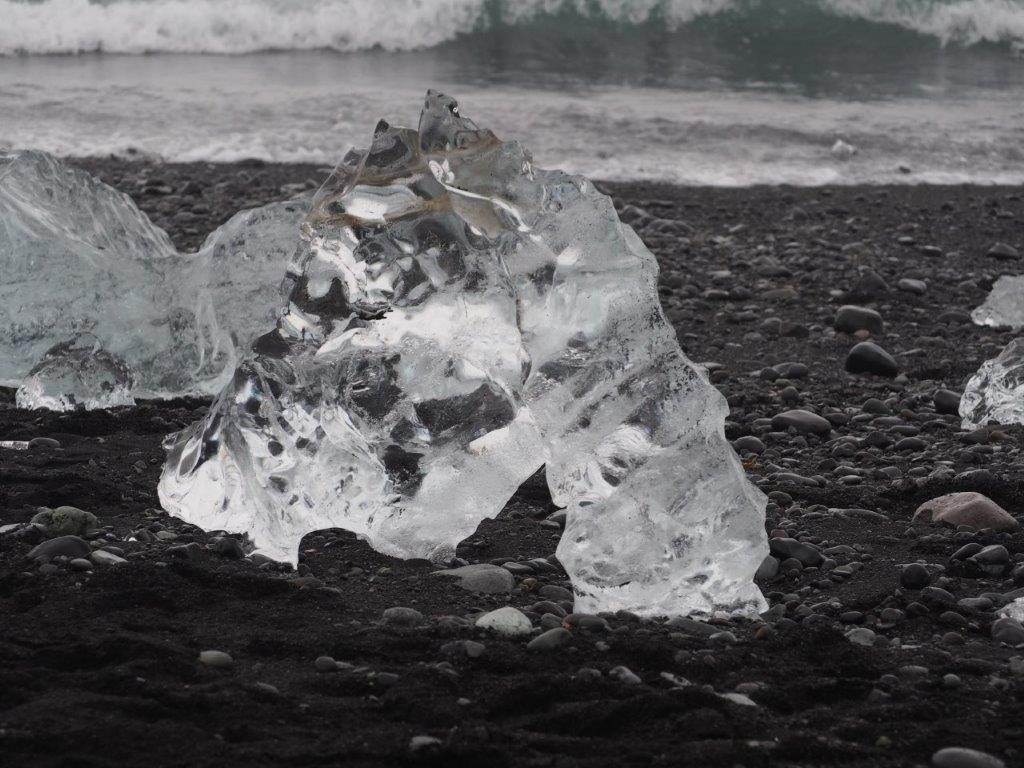 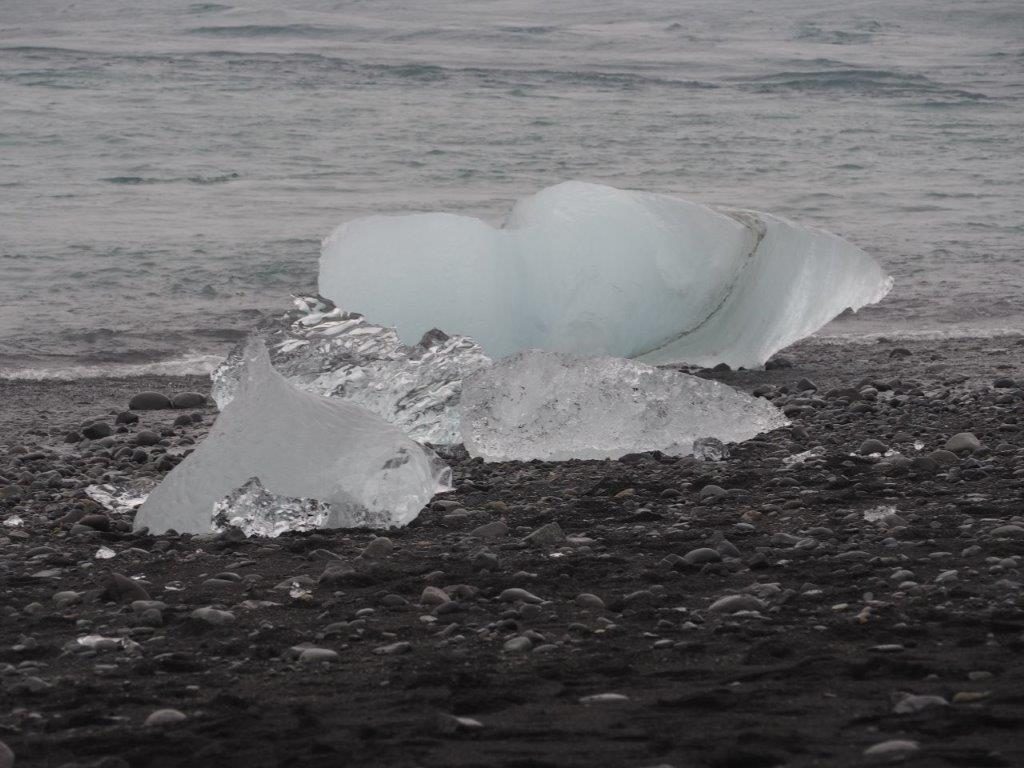 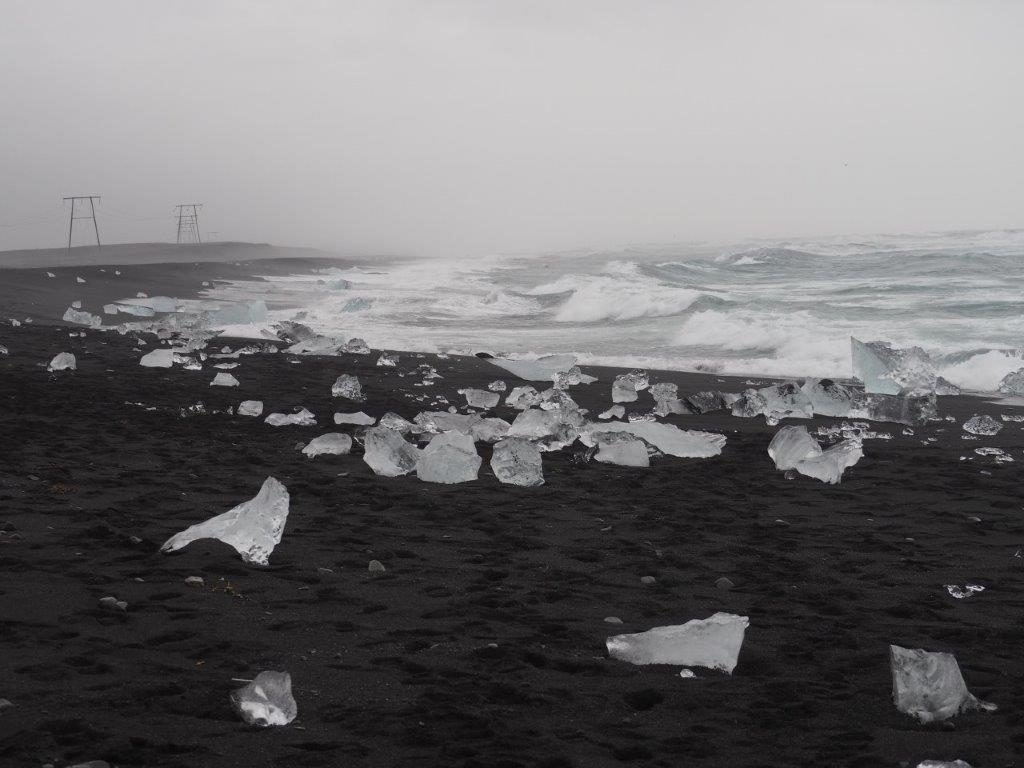 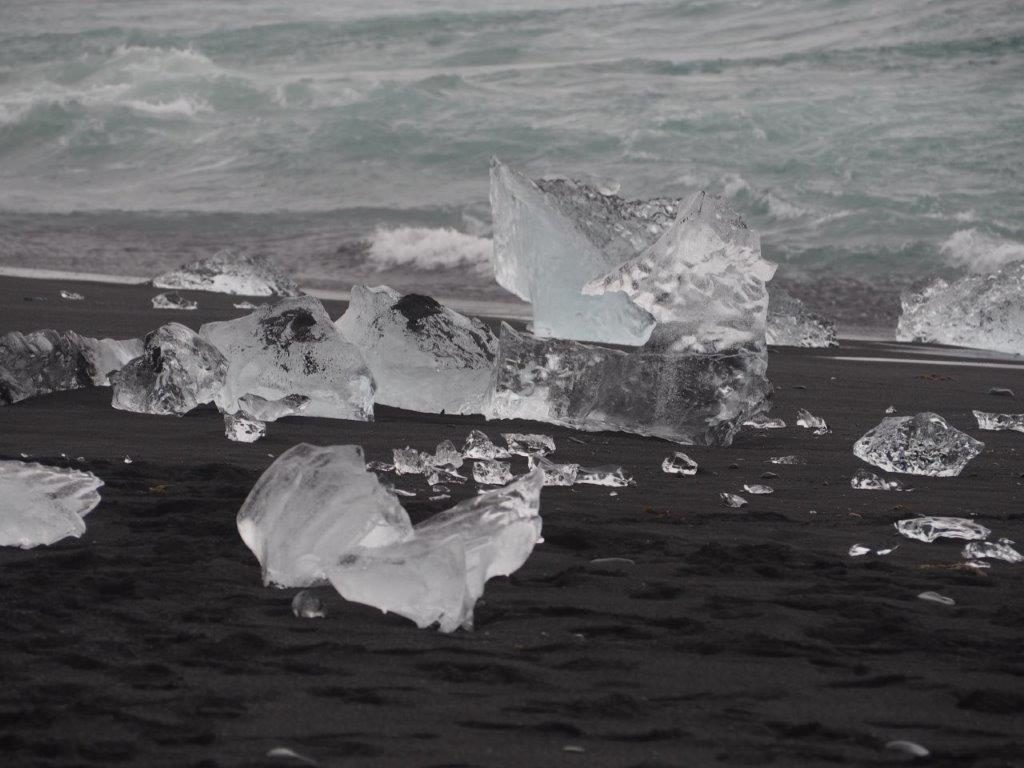 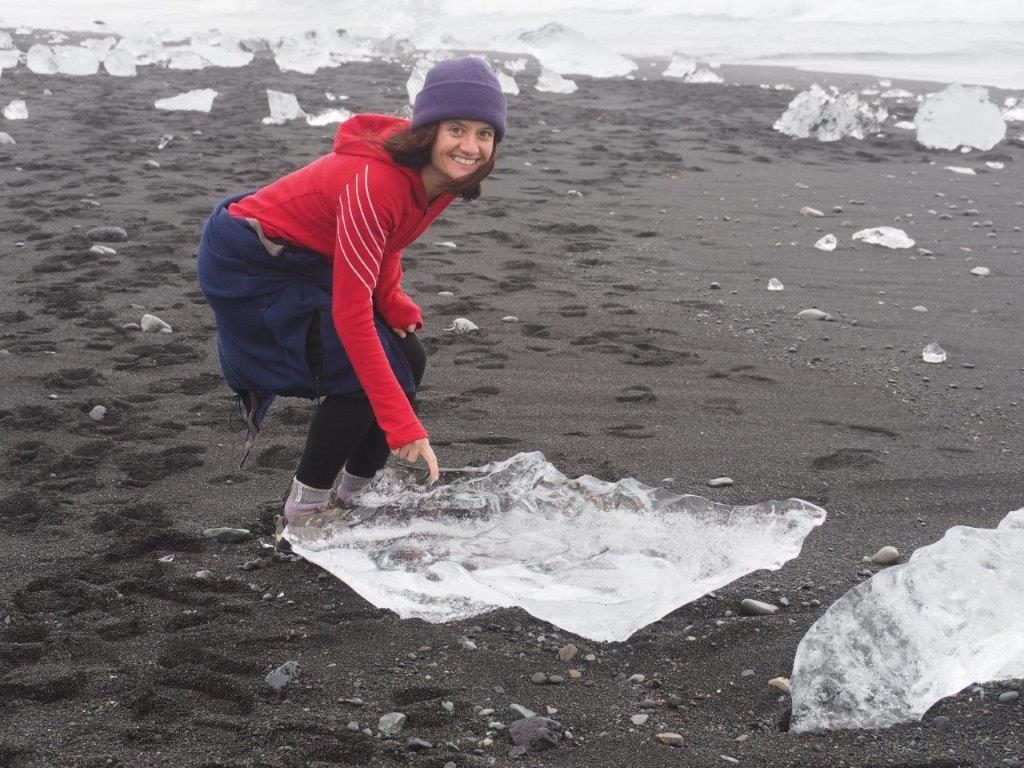 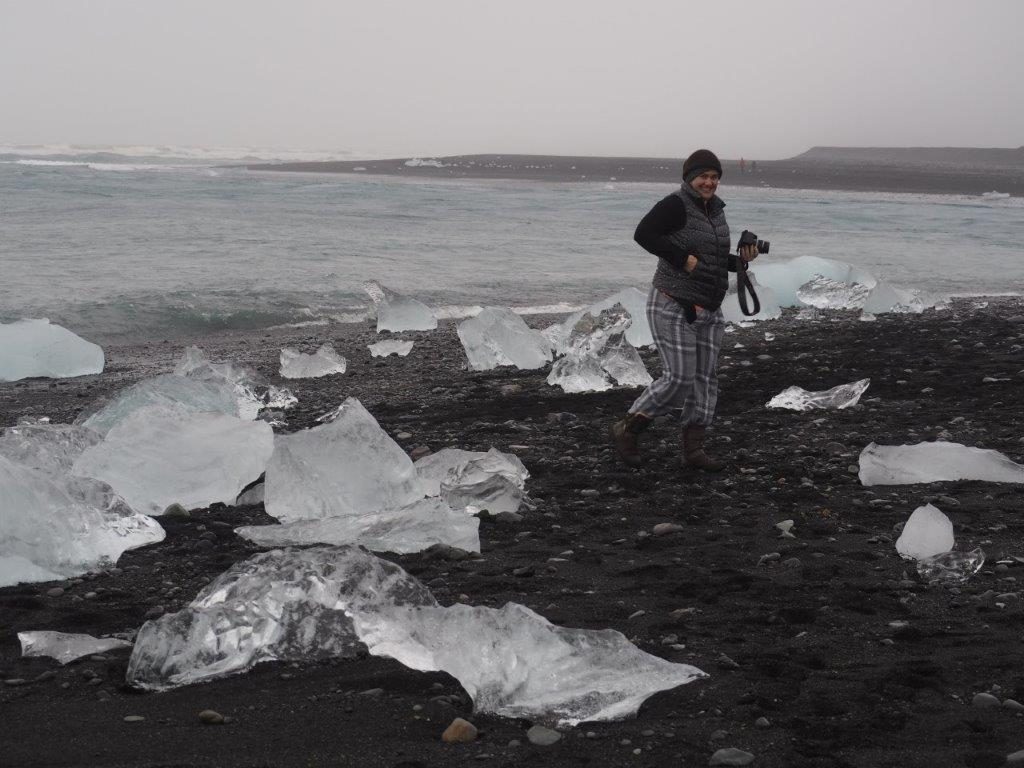