Our first view of the Grand Canyon made the drive all the more worthwhile. 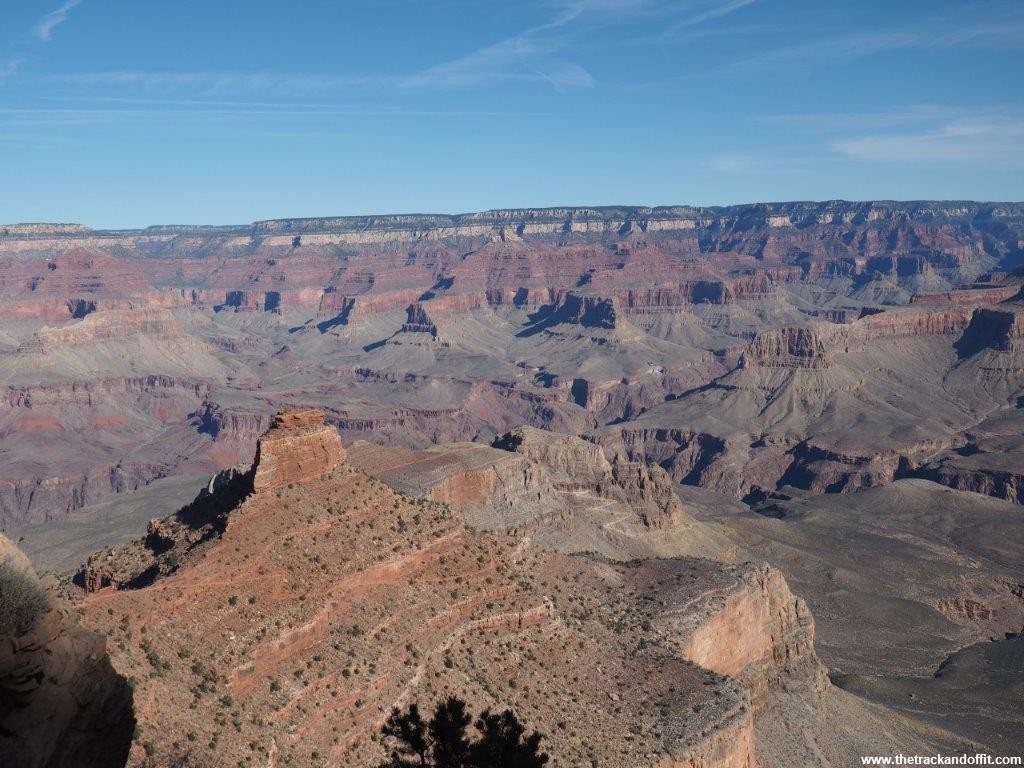 We arrived in the dark so it wasn’t until the next morning that we got to the South Rim. We camped at Mathers campground, in the park. It was surprisingly busy for the time of year. At this elevation in February (5000 feet) it was the coldest we’d been in months. Maybe years. There wasn’t as much snow as Sequoia but the air felt quite icy and it was much colder. Definitely in minus territory. There were so many people rugged up and huddled around camp fires as we drove in. We spent most of the night in the ‘lounge room’ in the back of the van.

Luckily, the days were clear sunshine and much warmer than the nights. A short walk through the trees and closed sections of Mathers took us to the Grand Canyon Visitors Centre and our first view of the south rim. 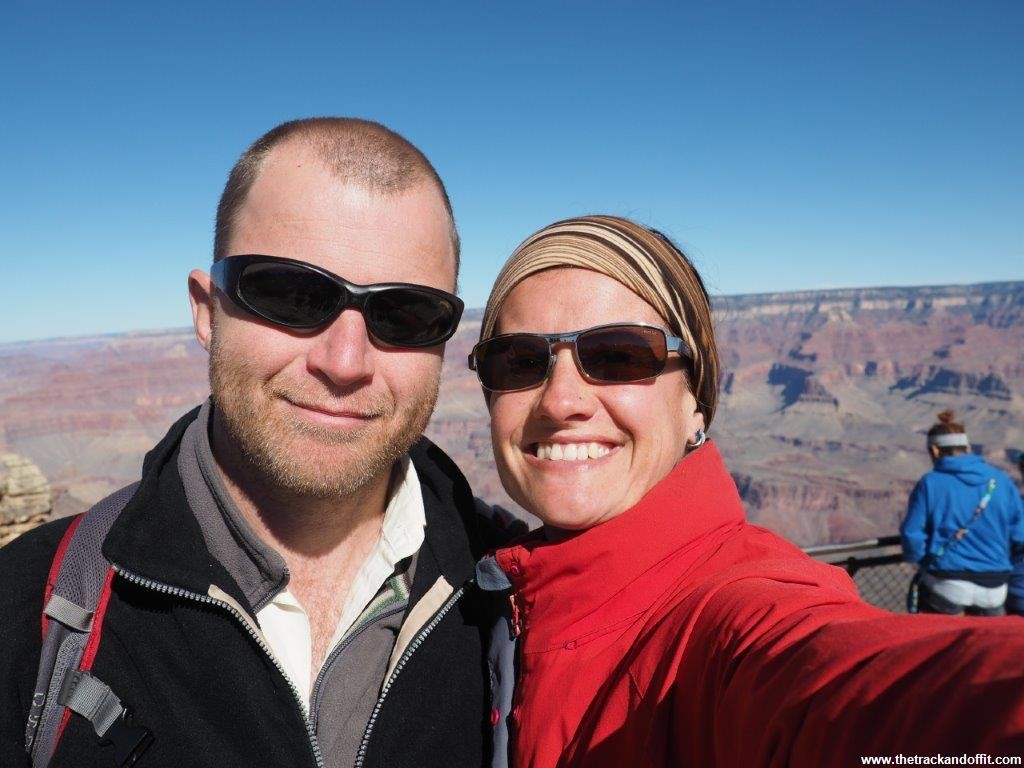 We stopped at the bike hire shop first and on the very enthusiastic lady’s recommendation, we headed into the Visitor Centre to watch the video about the forming of the Grand Canyon and the life it’s seen over millions of years. She was particularly excited that the scientist from ET does the voiceover (??). It was good and informative but I wish we’d stepped out onto the Rim first. The images on the video prepared me too much for vastness of the canyon. 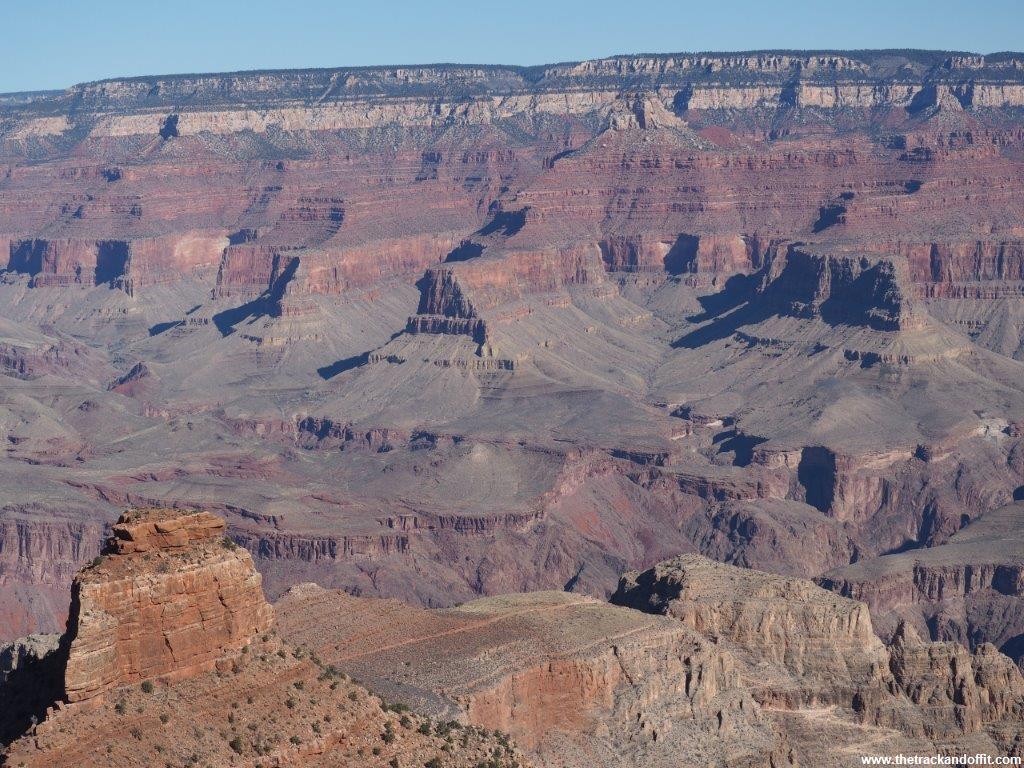 We walked the path of the South Rim for an hour or so. It might have been two. We were quite captivated by the views as we strolled along. The Park Service tried to give some perspective of how old the Grand Canyon is, preparing information boards and path stones indicating that every step is like walking back in time 1 million years or so. I couldn’t fully grasp it but Barry enjoyed the perspective it gave him. 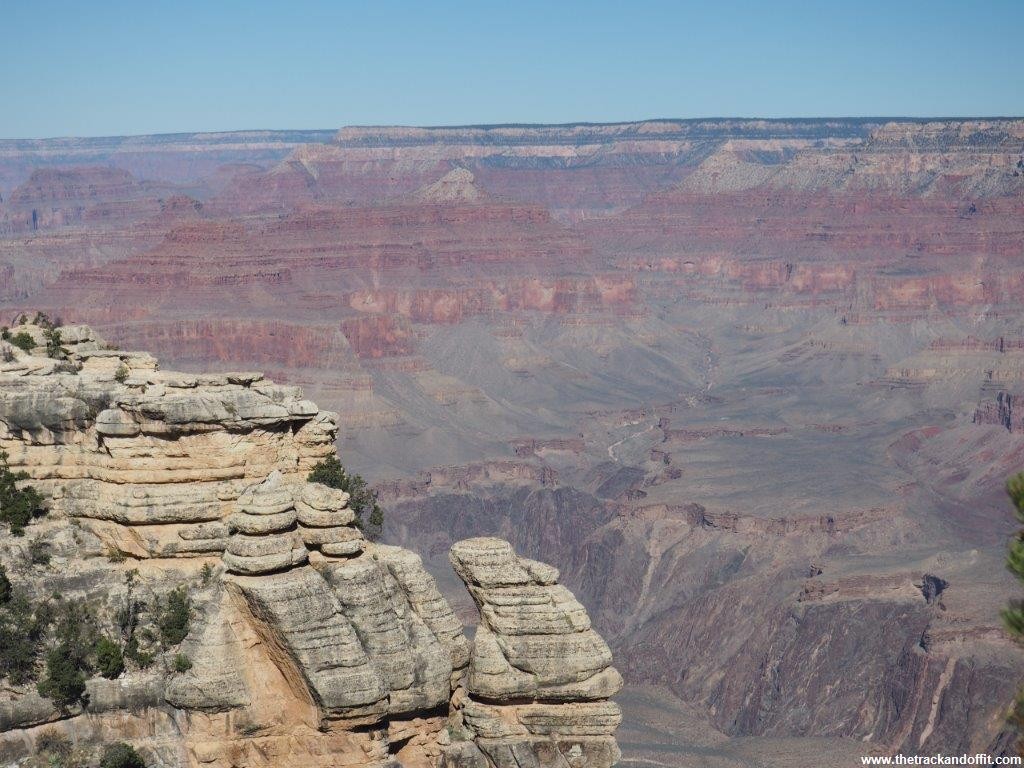 It’s all about the layers

We eventually reached another small village and the Bright Angel trailhead. It was a clear day and I could see all the way down into the Canyon, and could just make out the mules plodding along. 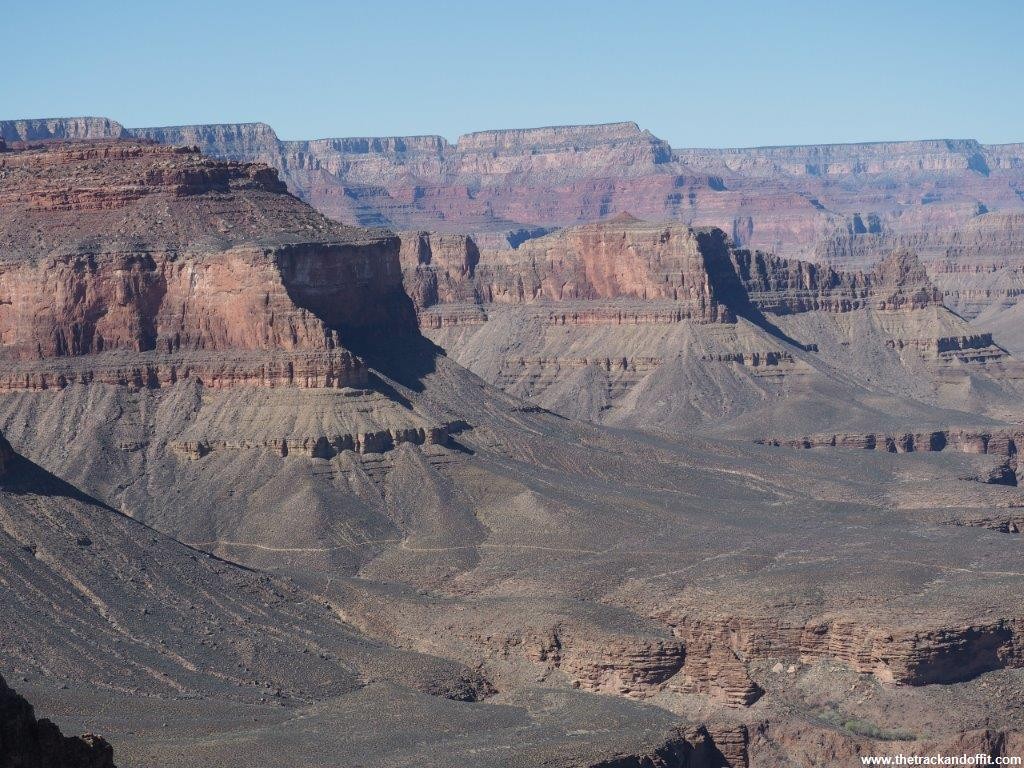 We took the free shuttle bus back to our starting point and returned to the bike shop to see the enthusiastic lady about some bikes. A young boy served us this time and he kept calling me ‘mame’. Very polite but it made me feel very old at 35 years.

We took off along the dedicated bike track out to Yaki Point. It took us no time at all to get there so we spent some time just staring down at the vastness and just chilling on the edge of the world. 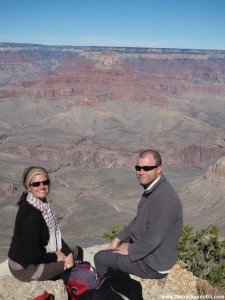 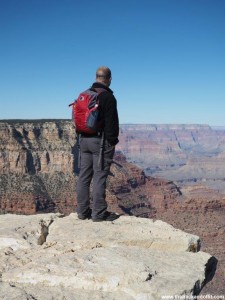 On the way back we almost cycled into a herd of Elk. It was pretty awesome. They look kind of mangy because they were in the stages of shedding their winter coats. 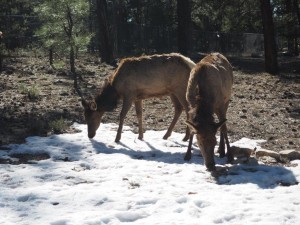 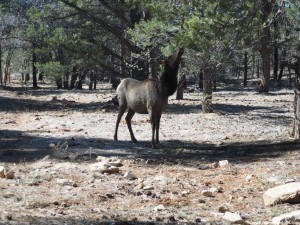 After another early night (when it’s cold you go to bed when the sun does…) we woke to another clear, bright and sunny day. After our leisurely stroll and bike ride we were in need of something more challenging.

We arrived quite early at the South Kaibab Trailhead. We had no intention of getting to the bottom of the Canyon (and it’s not recommended), but figured we would make Ooh Aah Point and possibly Cedar Ridge, which are listed in the moderate and safe to do in a day area.

It wasn’t long before we got to Ooh Aah Point (230 metres down and about 1.4km of trail). The walking was quite easy and not particularly steep. The most dangerous part was the icy sections near the top that don’t get much sun and therefore haven’t melted yet. The views were pretty wonderful. 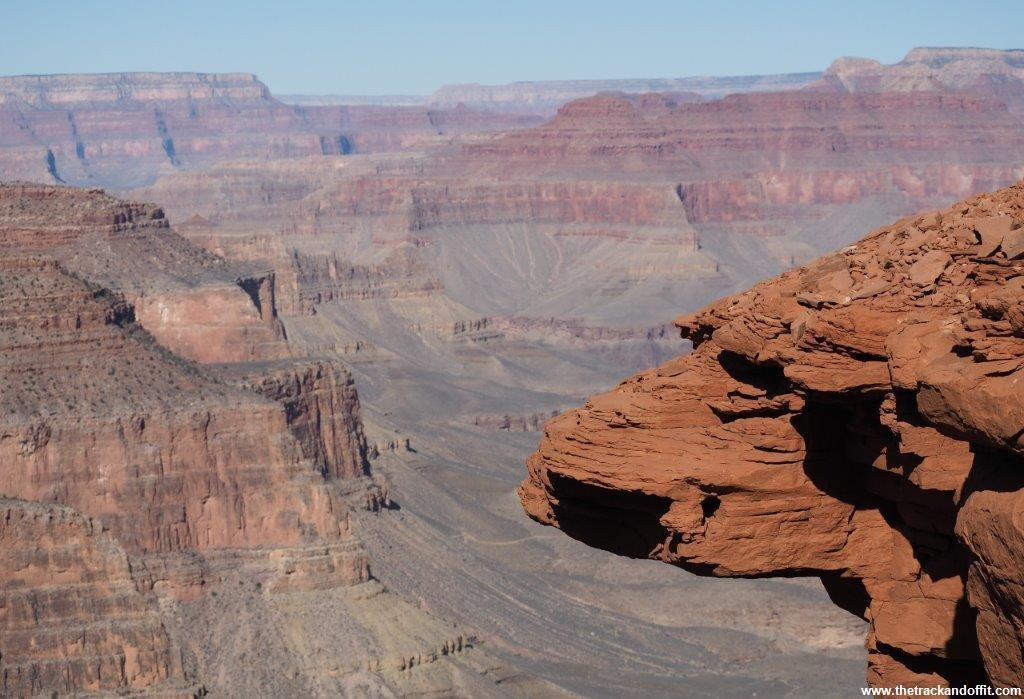 We kept going and despite feeling that we are largely unfit, and keeping a concerned watch on my lower back problem, we were at Cedar Ridge before we knew it (340 metres from the top, about 2.4km). We timed it badly and had to queue for the long drop. We let the crowds get ahead of us and explored the little plateau. 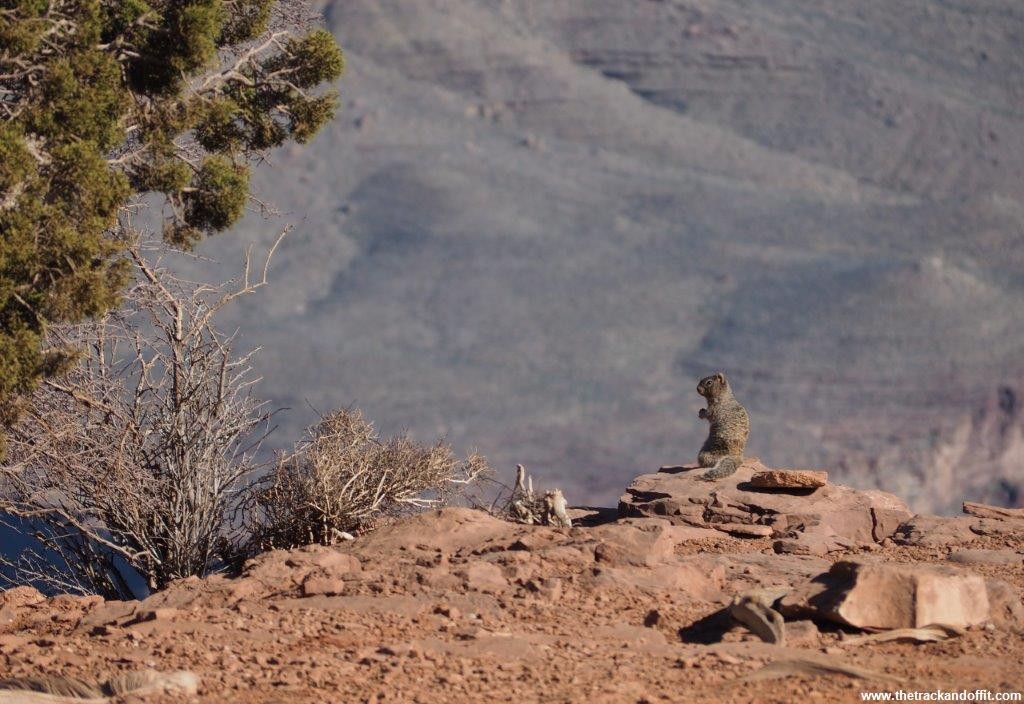 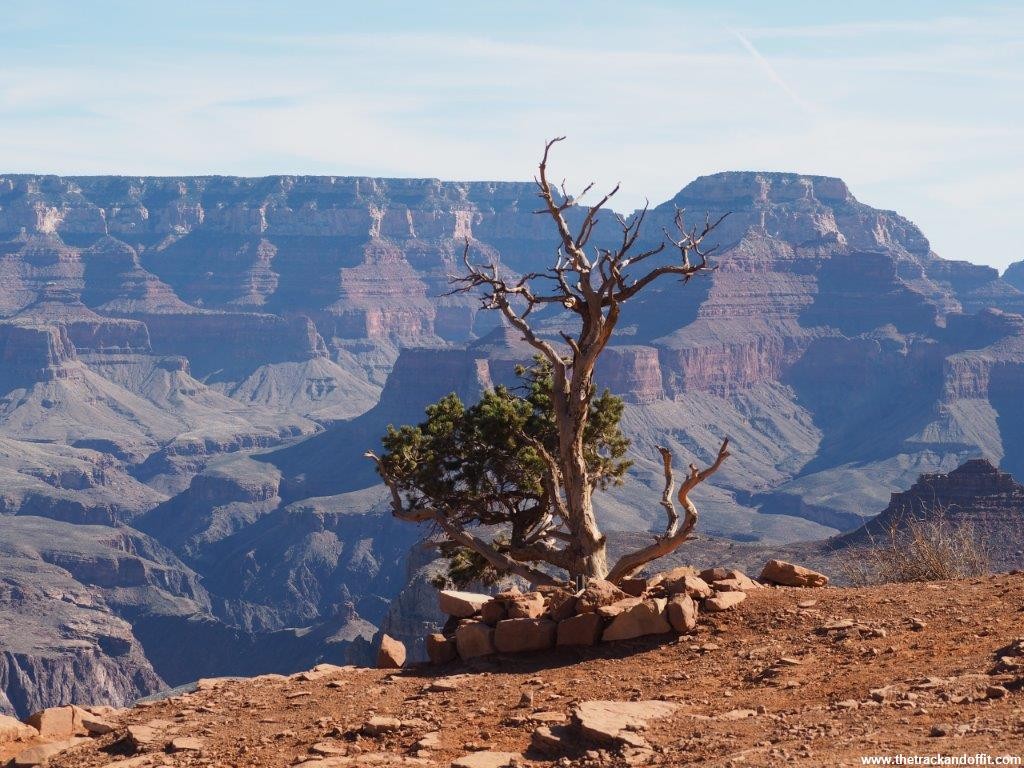 I wasn’t ready to turn back yet so we continued to wind out way down the switch backs. We stayed out of the way of some pack mules while chatting to some retired teachers who were heading down to camp for a few days. The sun was getting warmer and the lower elevation made me think that hiking to the bottom was a better option that camping at 5000ft. Too bad a tent doesn’t really fit in my hand luggage only (well, the tent probably does but not the sleeping bag!). 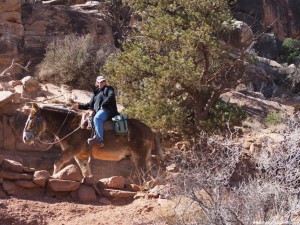 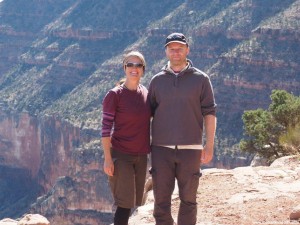 Return from Skeleton point is considered the furthest day trip without running into problems. This would be largely because there is not water refilling places until you get to the bottom of the canyon. Altitude could play a role at some point too.

So we watched the enormous black crows while we ate some chocolage then headed back up to the top. The pinion jays were smaller and prettier (a bit like me?). 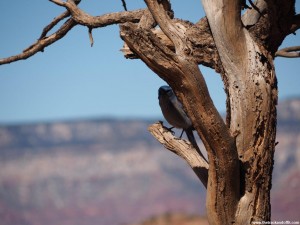 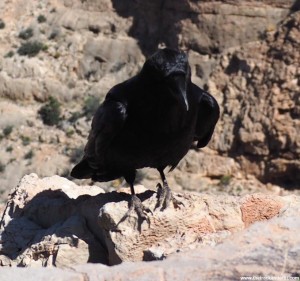 By the time we made it back to the top my legs and knees were feeling the steep sections. It took us around four hours to hike the 9.4km round trip. I think. We didn’t actually time it.