Barry and I are now over halfway through the Marcothon. We accepted the challenge to run 5 kilometres or 25 minutes every day of December and we haven’t failed yet. We managed to overcome a few hurdles.

Day 13 might be unlucky for some but not for us. Our Thai visas expired on Friday 13 December so we were up at the crack of dawn to get an early bus to Chiang Rai and onwards to the Thai-Laos border. We decided we didn’t really have time to run before we checked out of the guest house as we hadn’t bought tickets for the bus yet and we really needed to get on the 8am bus in order to be at the border crossing well before 6pm, when it closes for the night. Unfortunately, we didn’t get on the 8am bus. It was sold out by the time we arrived at 7.30am.

With our running clothes safely packed away, we had no choice but to wait out the next two hours in a coffee shop then spend the next three and half hours on a bus to Chiang Rai. I was getting nervous. From Chiang Rai there was another three hour leg to the border and any delays might mean us staying another night in Thailand, illegally.

Luck was on our side when we arrived though and the rickety old local bus heading to Chiang Kong was waiting at the bus terminal when we pulled in. There was just enough time to go to the toilet before it left promptly at 2pm. Phew.

Two and half hours later we got to Chiang Kong where we learnt that the crossing point, instead of being at a ferry port a two kilometre walk or 30 Baht tuk tuk ride away, had moved to a brand spanking new terminal with bridge crossing, 10 kilometres and an 80 Baht (per person) tuk tuk ride away.

It started to rain.

We had the slowest tuk tuk ever.

By the time we exited the brand new terminus and into Laos it was fully dark. We were also further away from the wee border town we had expected to arrive in. The tuk tuk ride took a reasonable amount of time through the wet streets to deposit us at a guest house. It felt like midnight but it was only 6.30pm so Barry and I duly threw down our packs, pulled on our running shoes and hit the streets.

Turns out that running in the dark and wet through a small border Laos town is as unusal as it sounds.

Day 14 dawned and saw us jogging along the streets in the early morning light. Huay Xai isn’t nearly as weird as some border towns (possibly because there’s a river in between the two lands) so we felt comfortable getting our run in early. We were getting our 2-day slow boat to Luang Prabang  sometime between 11am and 1pm so we wanted to be prepared. It was nice to see the town in the daylight. We got a few odd looks but also managed to avoid the pissing rain which drummed down at around 8am. 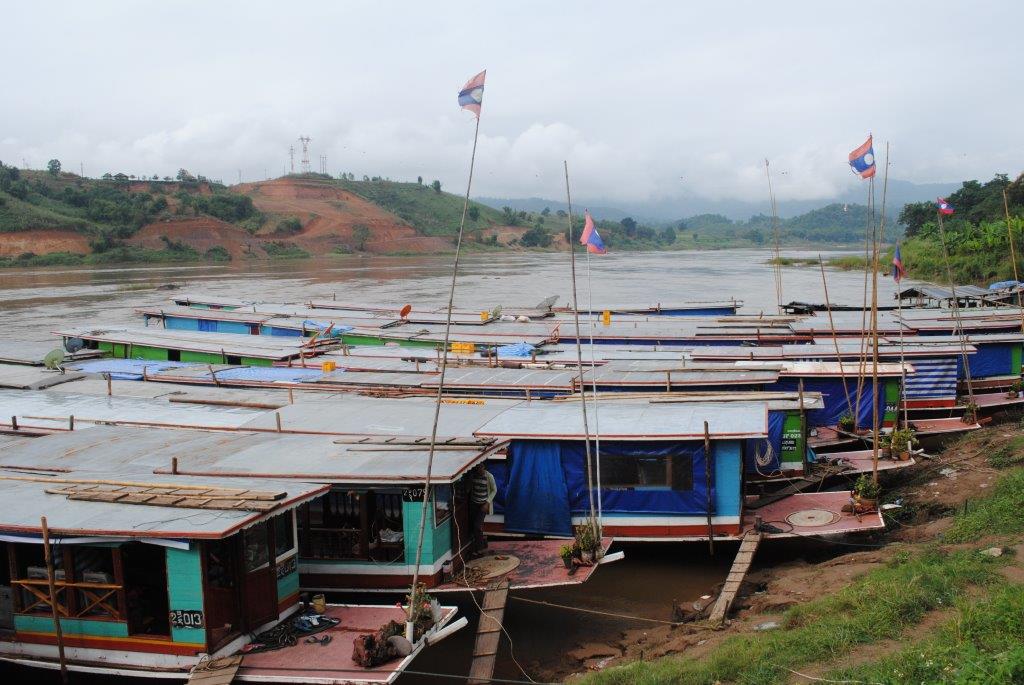 Day 15 saw us awake in Pakbeng at 6am but snuggling back under the blankets as we listened to the rain beat against the windows, the thunder boom across the hills and the lightening crack across the sky. 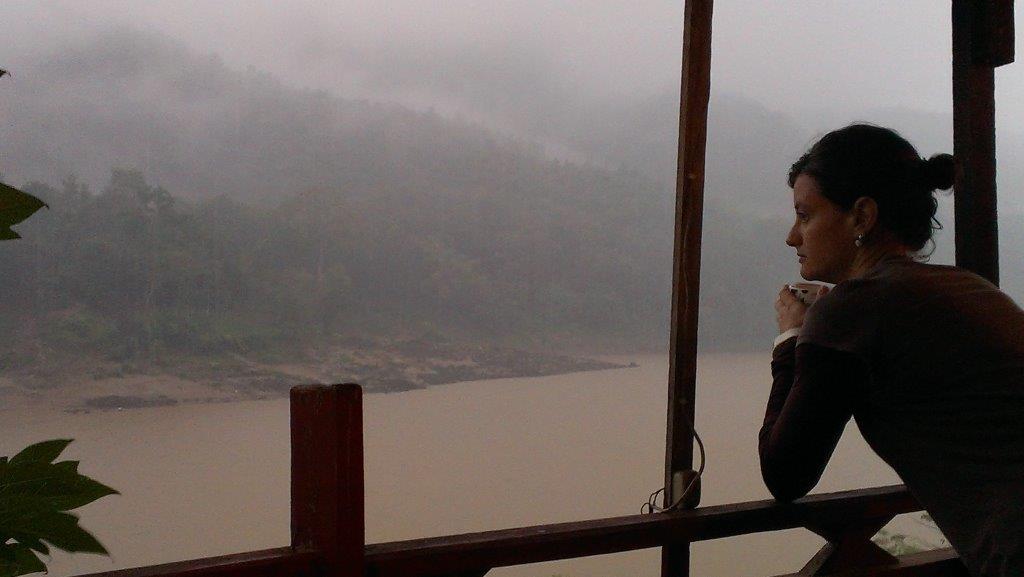 No morning run for us, we hid inside as long as possible, bolting for the slow boat to spend another day in a cramped seat. The rain eased up throughout the day but returned to welcome us to Luang Prabang at 5pm. Unfortunately for us, a new boat docking came into action two days prior and we were unceremoniously dumped 6 kilometres out of down. It continued to rain cats and dogs as the tuk tuk chugged us into Luang Prabang. We took a room in the first guest house with availability, waited 20 minutes for the rain to ease off slightly then hit the ground running.

For some reason no other runners were out enjoying the rain with us. 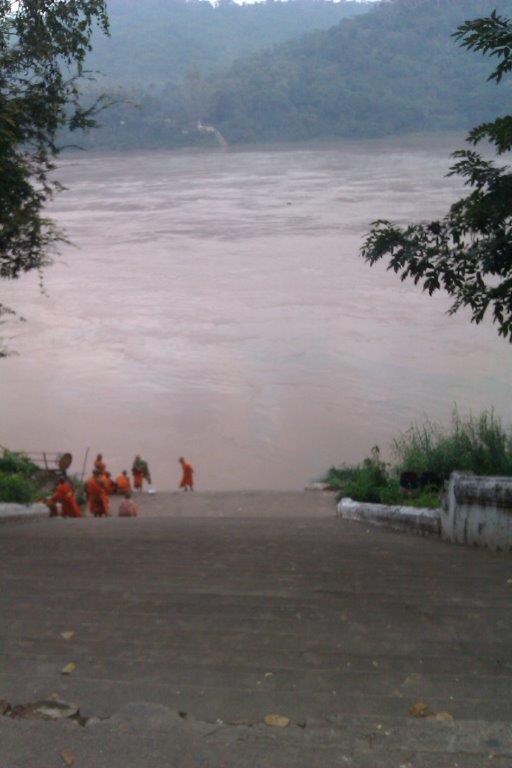 And some monks washing in the river.

Day 19 hit and the alarm went off while it was still dark outside. Our marcothon run was followed by a minivan ride to Vang Vien. I’m glad Barry wanted to break up the journey south as the five hour journey quickly turned into an almost eight hour saga as our driver tried ‘short cuts’, headed back towards Luang Prabang to get petrol and stopped at numerous road side stalls to make calls.

Day 20 had us swapping the Mekong for the Nam Song. I had expected not to like Vang Vien very much but it turned out to be a nice wee town. The path along the river was nice for running as the mountains looming in the distance peered down on us. 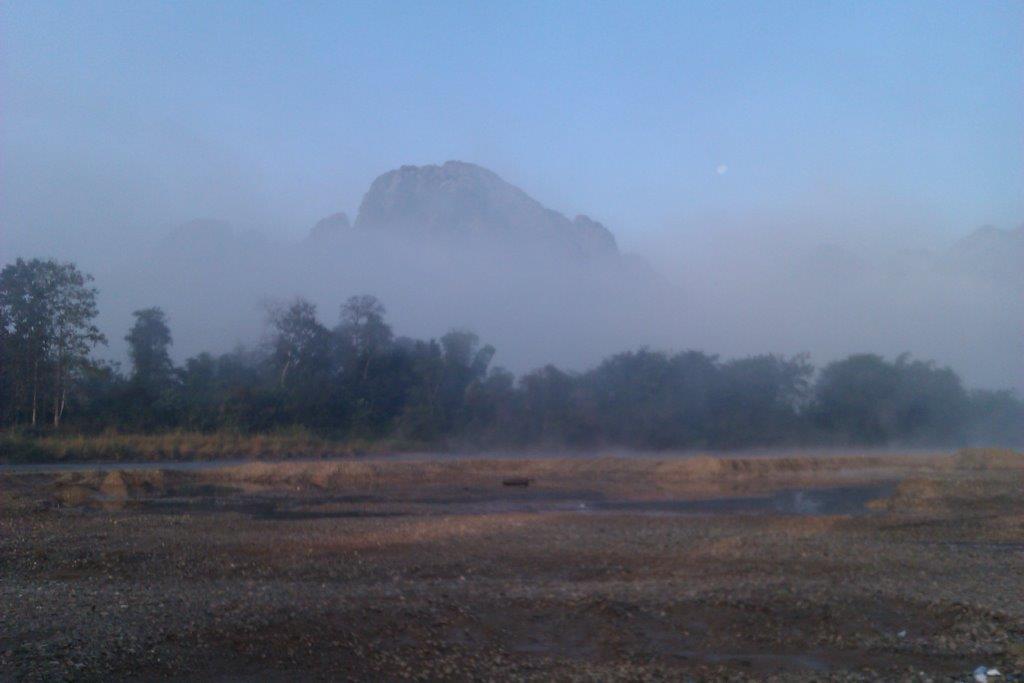 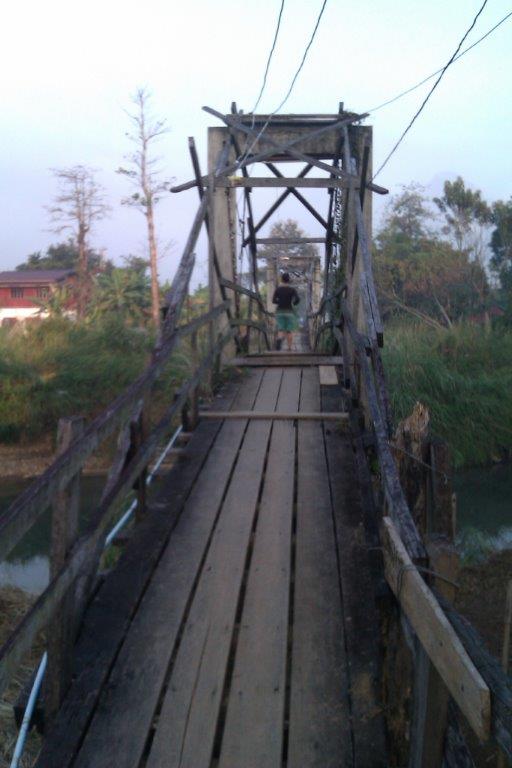 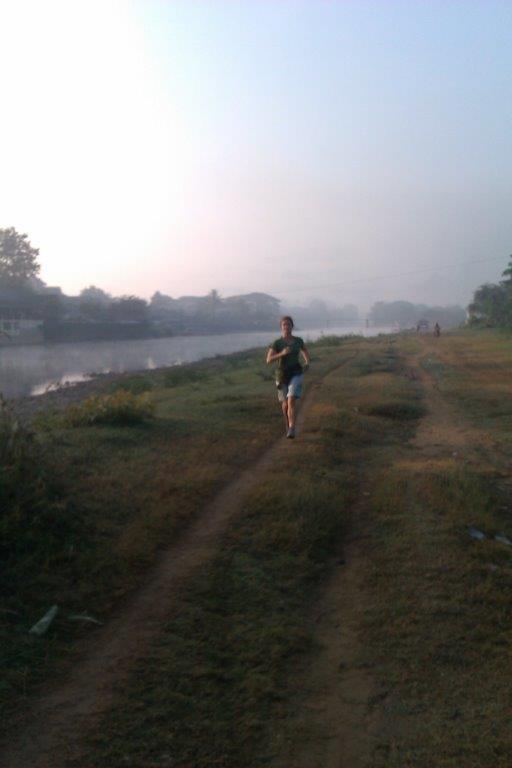 We got a few odd looks but our Marcothon is still in tact.

2 thoughts on “The Marcothon – Exercise While Travelling”