The Marcothon is a daily running challenge held in December. The aim is to challenge yourself and run for 25 minutes or 5 kilometres, whichever is the shorter, every day of December.

My friend, Gail Niven, convinced me before I left Edinburgh that it would be a good way to get back to my usual active self (I’ve become much less active since getting an injury from a dangerous Scottish icy winter).

Out here in South East Asia it’s going to be a challenge for a few reasons, not least because this December:

We’ve started off pretty well. We’ve been doing a little running and some tabata training since we arrived in Chiang Mai which has helped keep the shock of running every day to a minimum. Our routine is to get up around 7am, cycle 15 minutes to Chiang Mai University, run 25 minutes around the grounds and lake (it’s a little hard to calculate distances so we’re sticking to the 25 minutes) then cycle 15 minutes back to the guesthouse. 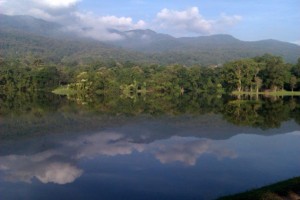 A minor set back was the ‘Changover’ (thanks to that delightful Thai beer, Chang), after the Smile Chiang Mai party. There was no way we were getting up at 7am after getting in after 2am. But we held true to the challenge and hit the streets at 7pm instead.

I really didn’t want to fail so early on.

Gail started an International Support Group on Facebook for her friends. It must be motivating for the UK runners to wake and find a ‘done!’ message from me or Jude in Cambodia. It helps when you don’t want to let people down. I think we have it easier though. It’s getting into winter for Thailand and the UK but that means 18 degrees in the morning here but it means 2 degrees in Edinburgh. Not to mention the rain, snow and 80mph winds. I know where I’d rather be.

These are the rules we have to stick to.

I’m not sure I agree with the no stair running rule – that might be all we’ll have at some little village on the Mekong. As long as I run the stairs and don’t walk them, I think it would count.

We had a pretty fun run at Chiang Mai 700 years stadium. We discovered an extra running track outside of the main stadium and I felt like a proper athlete. I’m not sure we’re going to find a gem like this anywhere else on our travels. 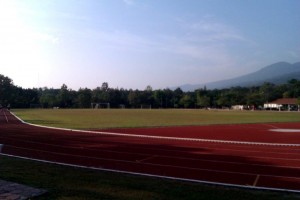 4 thoughts on “The Marcothon & Travel”