As dedicated as I was, I thought I’d have a day off after the first two days of Frisbee. So I went to Osaka-jo (Osaka Castle). It was really interesting to see a non European style castle. The main castle keep is a multi-storey pagoda set on top of a pile of rocks. The inside of the castle holds the Osaka Castle Museum, with a few artefacts, pictures and the story of the Summer War, between two Japanese shoguns. They were having a sale on the ticket price so I went inside. Also I was really hot from walking through the gardens and the thought of air conditioning was appealing. The museum is kind of interesting but I’m glad I went so I could recommend to Barry not to bother spending his pennies on it. The outside of the castle and the surrounding grounds were better. But good air conditioning. And a few views of the city from the top. 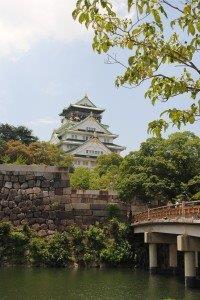 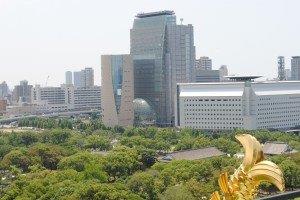 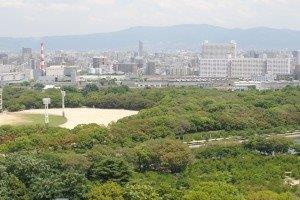 Spent a few hours exploring the riverside and parks of the city before hopping an overnight bus to Kagoshima, about 12 hours south of Osaka by bus. I figured it was a night’s accommodation and if you’re travelling overnight it doesn’t make much difference whether it’s 6 hours leaving at midnight and arriving at 6am or 12 hours leaving earlier and arriving at 8am. I also chose Kagoshima because it was one of the few places in Japan that did not forecast rain and thunderstorms, there was a cool island with a volcano 15 minutes away and I had read that there was a campground near the visitor centre there.
I arrived at 8am after managing a good few hours of sleep. It was raining. A lot. I took the ferry over to Sakurajima with my fingers crossed for a change in the weather across the water. I was wrong. It was harder than ever. As I had dragged the tent and roll mat across the country I was determined to camp so I slogged my way through gushing water to the visitor centre. There was no camp ground. Thanks Lonely Planet, wrong again. So I walked around looking for a place to wild camp. Then I waited under the shelter of the visitor centre to ask them when they opened. The rain got heaver and there was lots of thunder and lightning. I have heard the loudest thunder here in Japan. The storm the other night sounded like it was in our room.
More thunder. Or maybe that was the rumble of the volcano. A display in the visitor centre said that Sakurajima had had 732 eruptions so far this year, 615 of which were considered big eruptions, strong enough to cause some level of earthquake. The whole island is essentially a volcano. In 1914 villages and nearby islands were buried under the lava flow. Lava flow also joined the island to the mainland. You can now see fields of lava rock and the regeneration that starts to occur 50 years after an eruption of that magnitude. 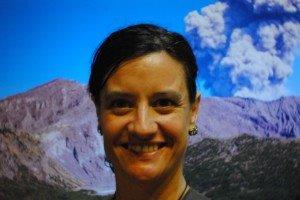 At the visitor centre – possibly the only clear view of the volcano possible!

Full of other information, the visitor centre could not tell me where to camp. More rain. More thunder. More lightning.

I stayed in the youth hostel.