With the conference over we headed to the den of iniquity that is Khaosan Road, the stuff backpacker legends are made of. The digs are cheaper but less clean and there isn’t a window to be had in our budget. But we didn’t get eaten by bedbugs, nothing got stolen and there were some very friendly staff. Barry got a few offers from tuk tuk drivers to take him to some ping pong shows but respectfully declined. 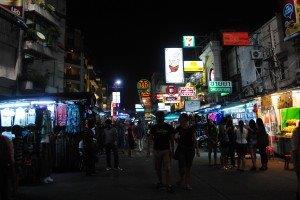 The food is still good and we got some tasty and cheap eats on the street, particularly a Pad Thai van.

We spent a few days working from a coffee shop (it had windows, and cake). As we were so close to the Grand Palace area we took some time out to be tourists. First stop was Wat Phrakaew, the Temple of the Emerald Buddha. They run free tours in English every day so we jumped on one of those and got some stories as we went around. 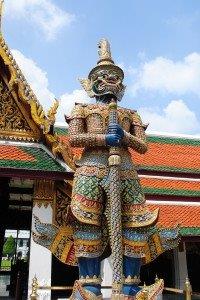 There are various temple buildings in the complex, including the library, where Buddhist scriptures are held, and a model of the temple at Ankor Wat, so that Thais who are unable to make the journey to Cambodia can see the structure. 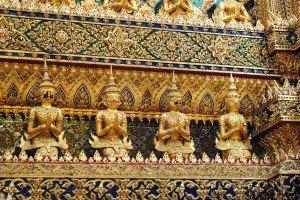 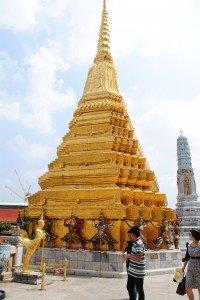 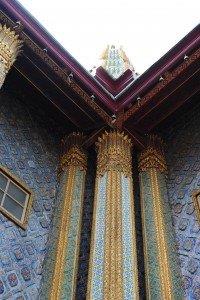 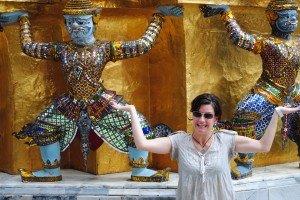 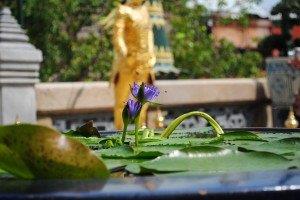 The Emerald Buddha is housed in a grand temple building and is made from jade, rather than actual emerald. After seeing the Reclining Buddha I was surprised at the size of the Emerald Buddha, about 66cm.

The Emerald Buddha has done a bit of travelling too, from India to the north of Thailand, then captured and taken to Laos, and finally retaken and returned to Thailand, this time to Bangkok. Maybe a trip to Cambodia in there at some stage too. At one point, the statue was covered in plaster to protect it during times of unrest, and during movement. Emerald Buddha was finally enshrined in Bangkok in 1782.

During the rest of the tour we saw the old Grand Palace, which is now used for housing international diplomats rather than the royal family, 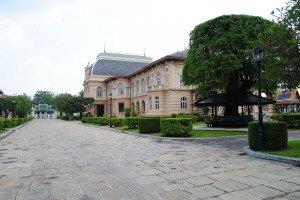 a town hall style building which houses the urns and ashes of the past Kings of Thailand,

After a long morning of sightseeing and an afternoon of working, we treated ourselves to prawn soup and Pad Thai and foot massage. I could get used to this.