With our time in Chiang Mai, and Thailand, drawing to an end we wanted to get out of the city for the weekend and enjoy the countryside and mountains. We decided to hire a scooter and spend a few hours (3 or 6 depending on who you ask), driving the winding roads to Pai, a laidback village full of chilled out hippies.

Unfortunately, when it came to Saturday morning, the pressure of the looming travel to Laos and the time away from the ‘office’ started to cause a bit of strain (I’m over it now) and we binned the full weekend away in favour of a shorter bike trip.

Sunday morning saw us up early for our Marcothon 25 minute run at the University, a quick shower and leaping onto a scooter. Of course, Barry didn’t let me drive so I was on the back again. Traffic is pretty friendly in Chiang Mai but even so, riding a scooter requires some concentration for weaving in and out of the streams of scooters, taxis, trucks, etc. I even had my work cut out for me as I was in charge of directions, peeking around Barry’s helmet. 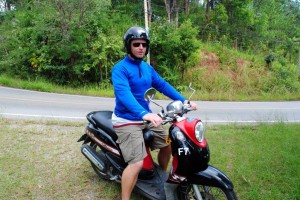 We headed out to Mae Rim, towards the more mountainous regions. We had no plan in mind and took roads on a whim. We first headed in to see the Mae Sa Waterfalls in Doi Inthanon National Park. I was concerned it would be another uninspiring waterfall but the signs outside the park showed pictures of 10 waterfalls, perhaps justifying the 100 Baht entry fee.

It’s actually one waterfall with 10 levels. We parked at the bottom level and followed the path up, stopping at all of them on the way. 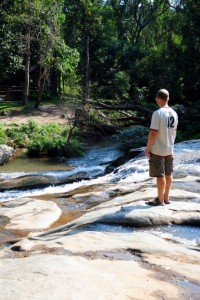 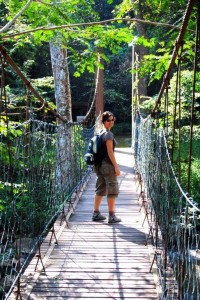 We passed hundreds of Thai chilling out by the water, having picnics. Even spied some park rangers and safety notices for swimming in the falls and taking food further up. You won’t believe this but I thought it was too cold for swimming. At least in the shade. It’s winter here after all. So, walking it was. There may be harder tracks up the falls but we managed to find the easy one. I love the sound of the gushing water (thanks, rainy season) and the peace of sitting on a rock watching the water, and the world, flow by. 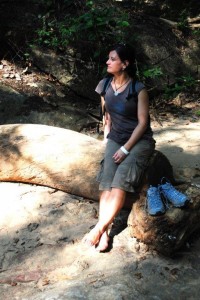 Lisa, the next 100 pictures of waterfalls are for you! 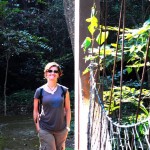 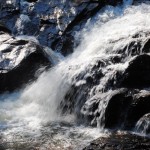 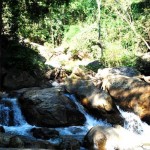 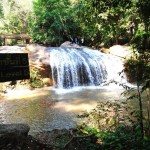 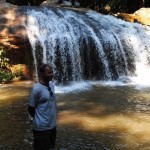 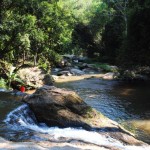 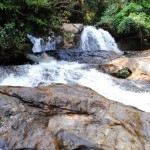 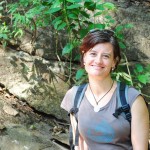 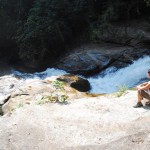 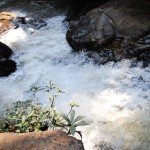 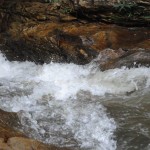 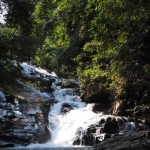 We headed deeper into the mountains, pushing the little scooter engine to the max. She made it. We stopped for an awesome lunch in a random roadside restaurant (lucky it was so tasty, we had to wait for nearly an hour for our food to arrive).

Stopping to eat strawberries, we came across a holiday resort randomly settled in a small valley of the Mae Rim region, Mount of Olives. For at least 15 minutes we discussed how abandoned, disused, out of season, and downright weird it looked. Until we spotted a couple of people walking around. Thanks to Google, we learnt that a local artist was given free reign on the buildings and had created an odd sort of wonderland which may never be opened. So down into the valley we went to have a look around. The first bungalow was unlocked. There was a musty, never been used smell about it and plastic still covered the mattress. A very clean place for squatters?

Further down the hill we realised that Mount of Olives was open for business. There may have been three or four people staying there. The caretaker invited us to have a look around. This part was a bit more inhabited, two guests sat on a weird bench, nursing their wounds (possibly from a scooter accident) and smoking. A couple of dogs quietly wandered about or slept under weird concrete or clay structures. 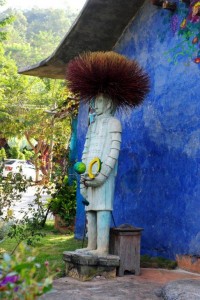 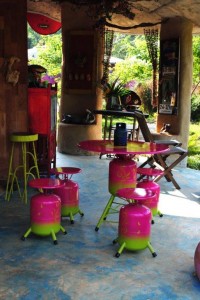 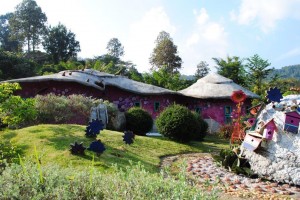 It’s perhaps the perfect little hideaway to get away from it all. I still think it was weird. So did Barry.

More winding through the mountains where it was cold enough for us to stop and put on jumpers.

Even if it wasn’t a whole weekend away, it was still a satisfying day. Good food, nature, waterfalls and weird stuff. What more could you want?