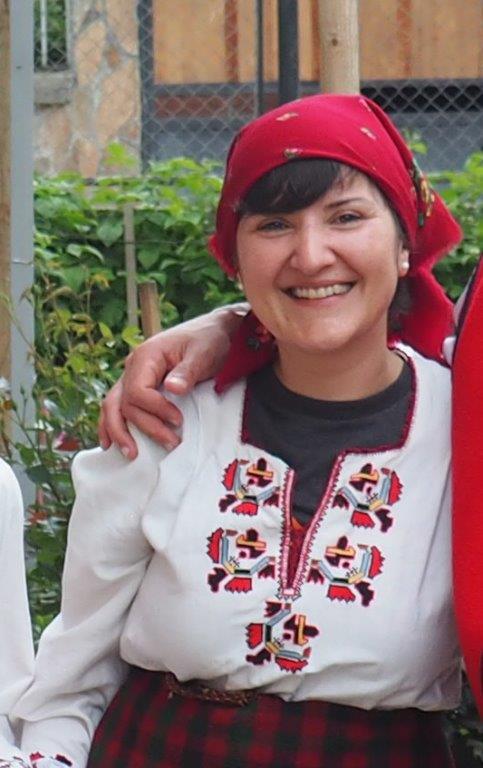 She manages the Coworking Bansko space we’d been using and she’s awesome. She adopted us during our meetup and now she’s our new best friend forever. Over a beer in the park one evening (I swear it was just one), after the traditional Bulgarian dance class at the local school, Irina suggested becoming Bulgarian for a few hours over the weekend. 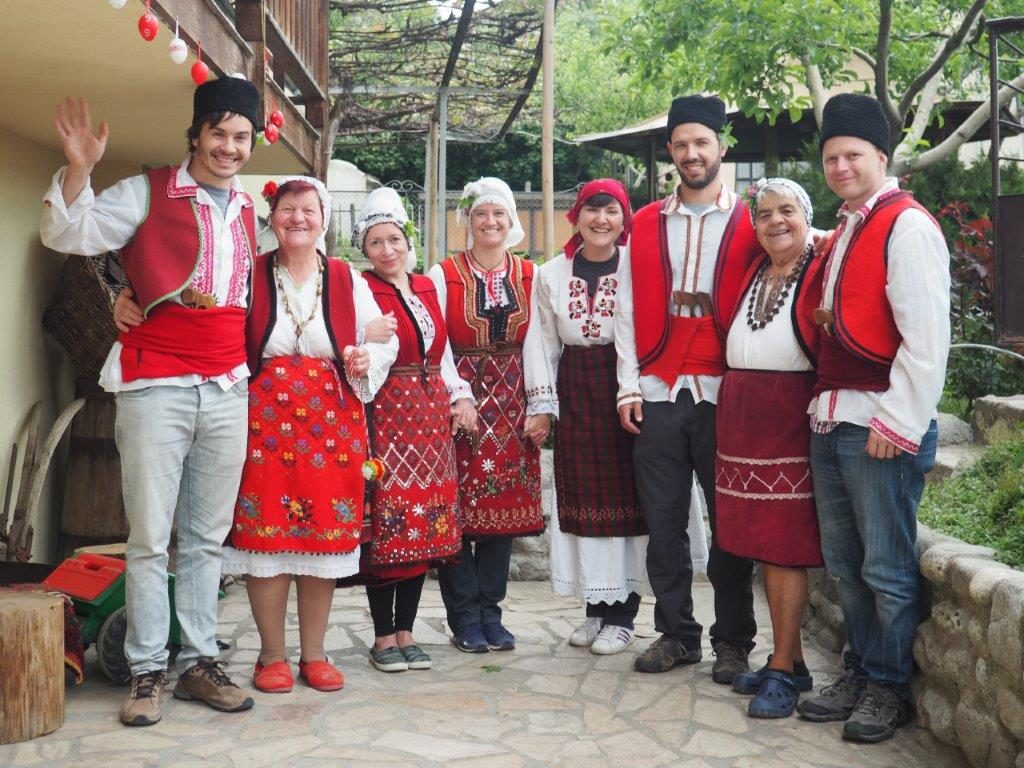 I was sold. (Also, rain was forecast so hiking would have been miserable.)

In a small mountain town, about a 15 minute drive from Bansko, lies a beautiful village. In the village there is a house. In the house are the Entrepreneurial Babi (grannies). In their retirement, Baba Janna and Baba Elena share their stories of growing up in the not modern world. They want to pass on the traditions to the younger generations who are losing their heritage (and maybe their ability to drink copious amounts of rakia before lunch. And probably breakfast). They usually cater to a Bulgarian audience but if you have an awesome new best friend forever like Irina, then they are happy to entertain the tourist crowd. Well, they would be happy to share anyway but without a translator you might not know what was going on.

It was late on a Sunday morning when we arrived at the Entrepreneurial Babi House. Out of the house shuffled the Babi wearing traditional Bulgarian clothing, red slippers and big smiles. They greeted us with flowers for our hair. Right for the marrieds, left for the singles.

They took us inside. We toasted our arrival with a jug of Rakia (I’m pretty sure Baba Janna can drink us all under the table). We were led to a room with a low ceiling and a weaving loom. The walls were decked with bright red waistcoats. It didn’t take long before we were decked out in traditional garb.

The boys did not get a dress. They got shirts, waistcoats and hats. And guns. Obviously. 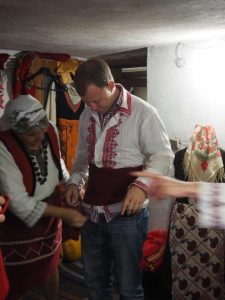 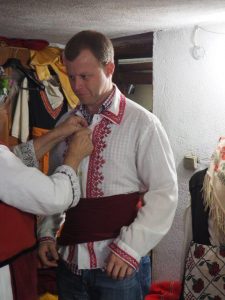 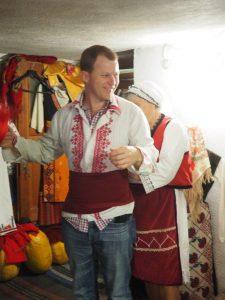 The sun was shining on this side of the mountain (guess that forecast was a bit off) so we went outside for some Bulgarian dancing. I’d been taking evening traditional dancing classes with Irina in Bankso so I think I did pretty well. I’m sure I could have handled something more complicated…Even Barry loved it. I could tell, I swear. Baba Elena and Baba Janna sang along to the recording, competing as to who could best drown out all other noise. 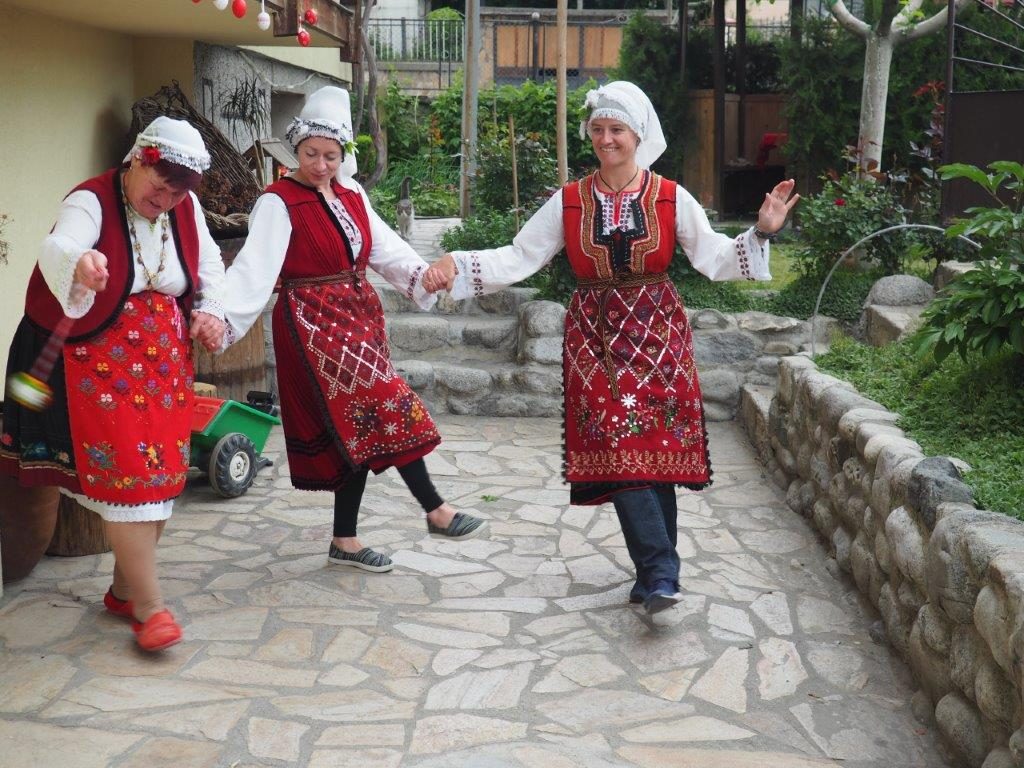 Then it was time for some rakia and back into the house.

In the olden days when there wasn’t much money, families in Bulgaria often ate a dessert made of pumpkin, sugar, olive oil and flour. So that’s what we made. Christie jumped right in and started grating pumpkin with enthusiasm. Then she grated her finger with misery. She was sent off to the bathroom while Filipe took over.

Filipe was in his element squeezing the juice out of the pumpkin. ‘If you squeeze a woman like that…’ Baba Janna admonished and hilarity ensued (thanks, translator!).

I was pleased to be given bread duty. I was in my element mixing and kneading a blend of flour, bicarb soda, vinegar, olive oil and Bulgarian yoghurt. I’d love to recreate it but Bulgarian yoghurt is some sort of life extending elixir that can’t be made anywhere else. 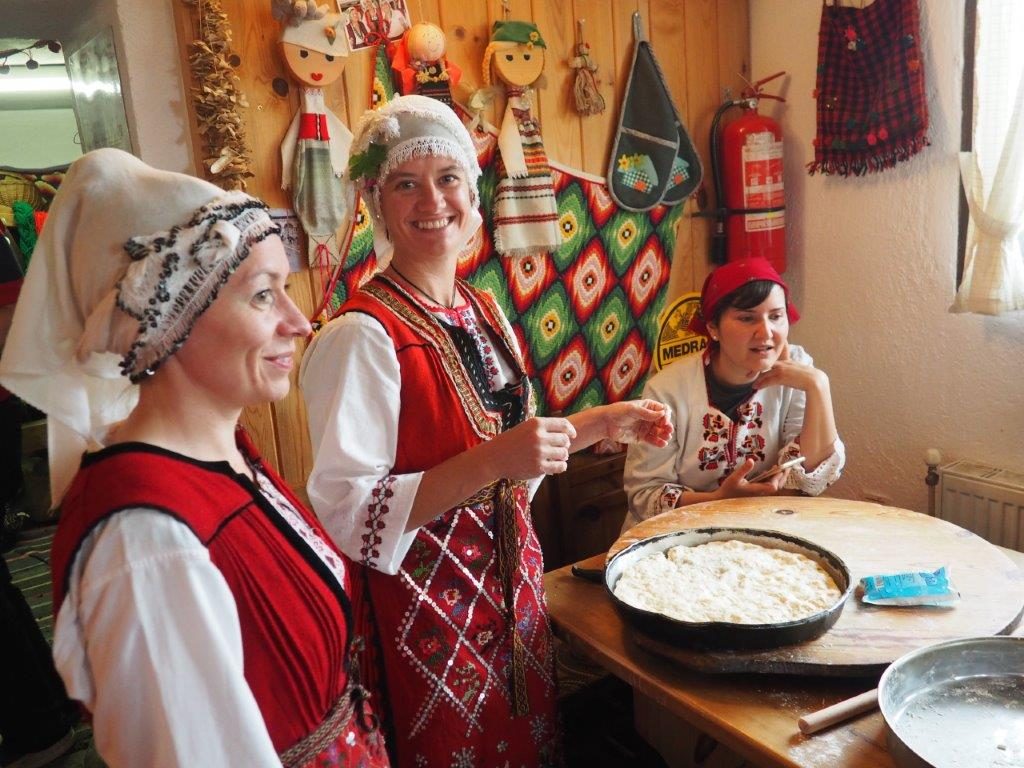 We celebrated everything going into the oven with some rakia.

The Babi sang us a welcome song and inserted the names of all our countries.

The Babi told us stories of their life growing up in villages. They shared memories. They told us that doing these events keeps them young and keeps the traditions alive. They are very sweet.

Then time for food. Not just our yoghurt bread. The Babi had spent the morning roasting potatoes, slow cooking mixed peppers and tomatoes (absolutely delicious) and sausages. We did our best with the mountains of food. 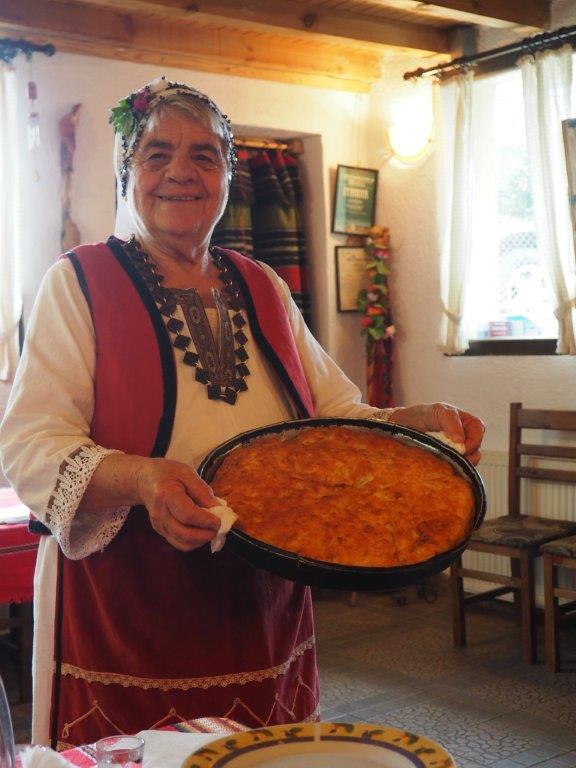 Then came our pumpkin dessert (yum) and adjourning to the winter lounge on the roof with coffee. I think Barry had a little nap.

Eventually we realised it was time to stop drinking the rakia and say goodbye to Baba Janna and Baba Elena.

A wonderful couple of grannies and a great experience. Thanks Irina! We were speaking Bulgarian fluently by the end, right?