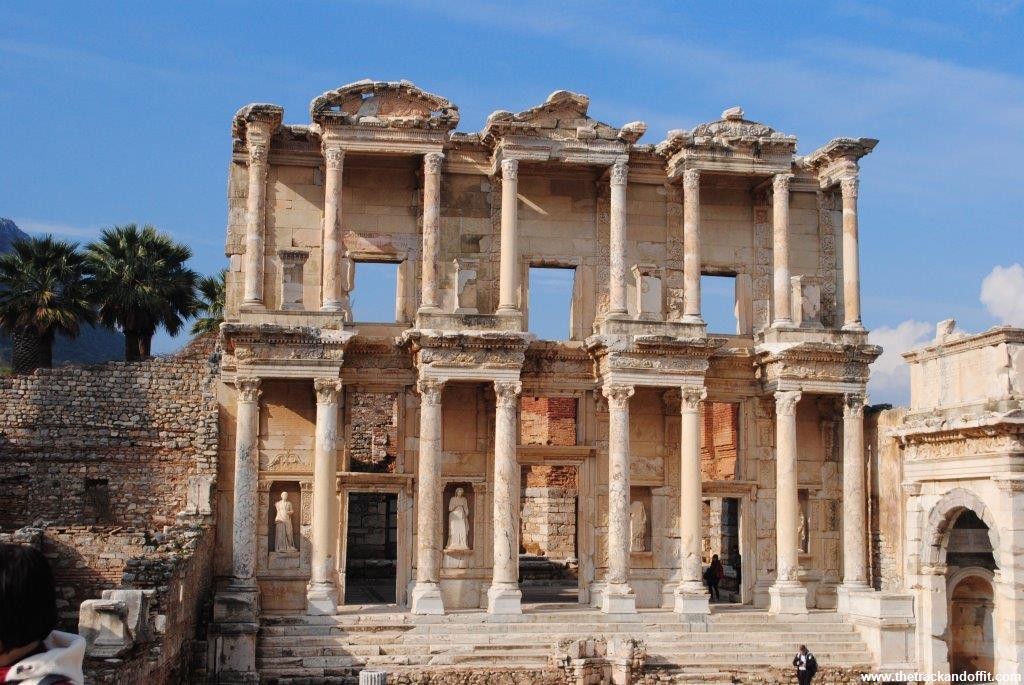 The library at Ephesus

I went to Selcuk primarily to visit Ephesus, the best preserved ancient cities in Turkey. Luckily for me there’s a bunch of other interesting sites too and I was armed with a list of all the wonders I wanted to lay eyes on. Thanks to one of the managers at Cella Hotel offering to be my driver for the day, I saw them, and more. Oz also became my photographer for the day and I’ve more pictures of myself at sights then ever before.

Selcuk is steeped in religious history as well as ancient history. The Virgin Mary’s House, where she is believed to have lived out her days with John the Baptist, is set high on a hill above Selcuk. It’s only about 6 kilometres so it’s possible to cycle but without a driver I’m pretty sure I would have been lazy and missed out on the wee house which has been rebuilt into a small chapel. Inside the chapel was still decorated for Christmas with a nativity scene and there are a few gifts from Popes who have visited. 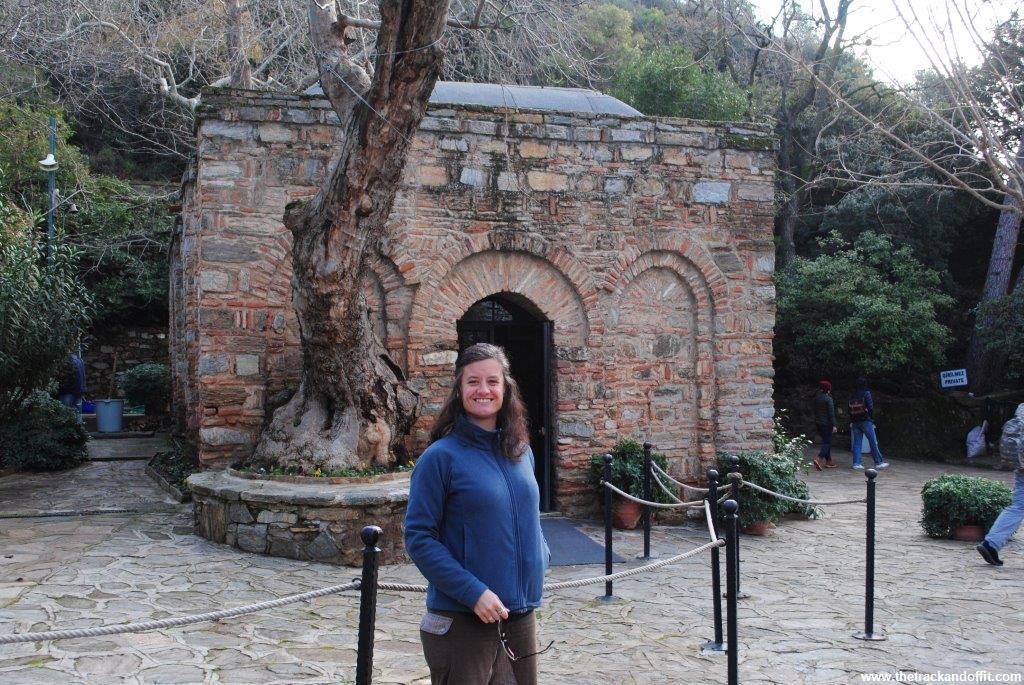 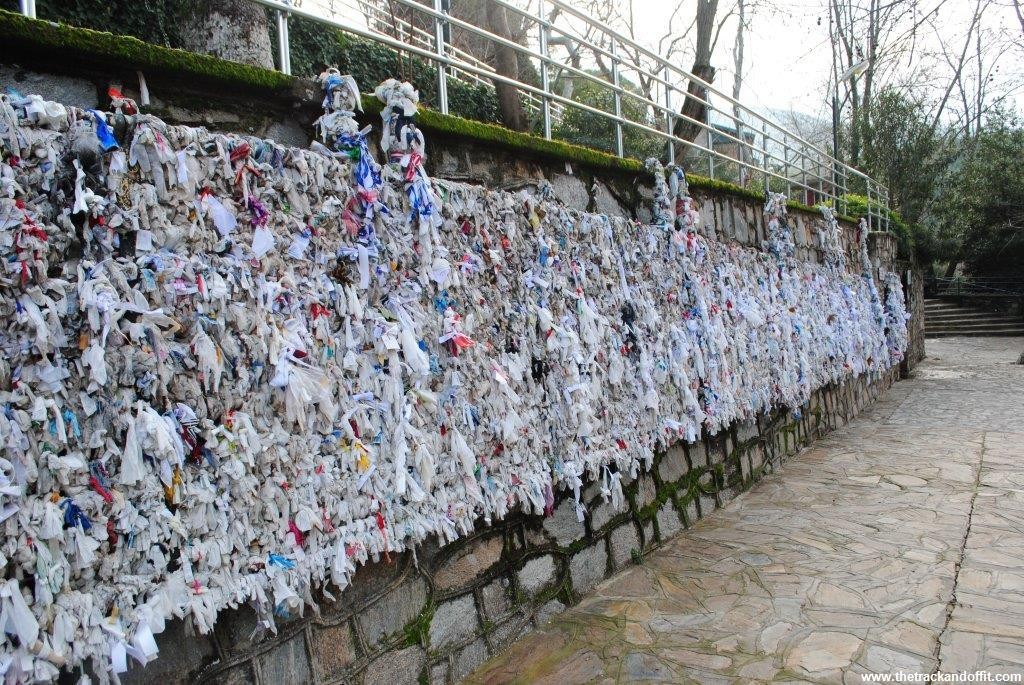 Is this a wishing wall of rags?

People have been telling me for ages how amazing Ephesus is. It didn’t disappoint. It began as a Greek city and later became the third largest city in the Roman Empire. I believe it’s the best preserved ruins in Turkey and I’m sure it’s high up on the list for the world. 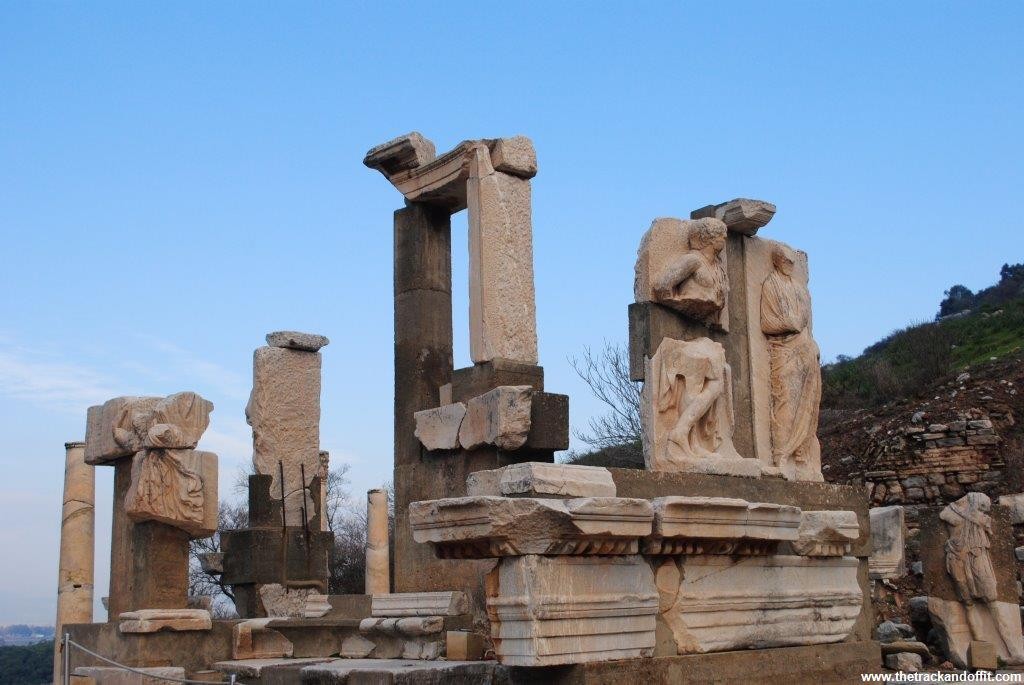 It was amazing to see such enormous stone structures, still standing, without a spec of concrete holding it together. You can still see markings of the stone masons whose work lines the colonnaded street, the mosaics still embedded in the ground, frescos on the walls of the terraced houses, the statues still in the niches of the library, the unmistakable latrines and tiered seats of the theatre. 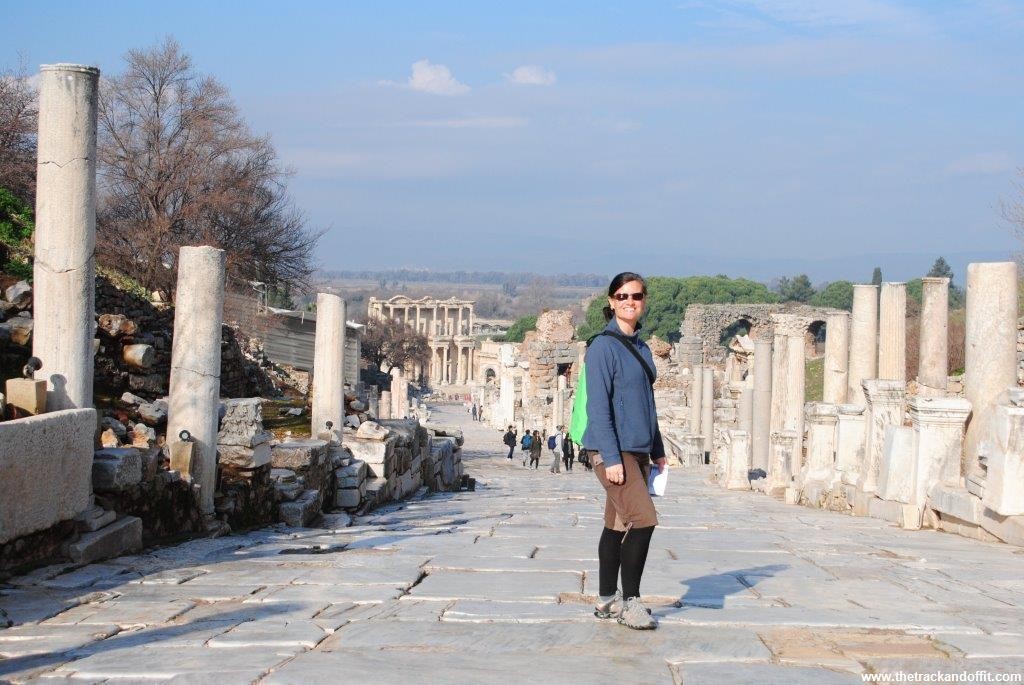 The collonaded streets. Holes were cut into the marble so it wouldn’t be slippery when wet. There are also initials of workmen etched in some corners to prove they did the work. 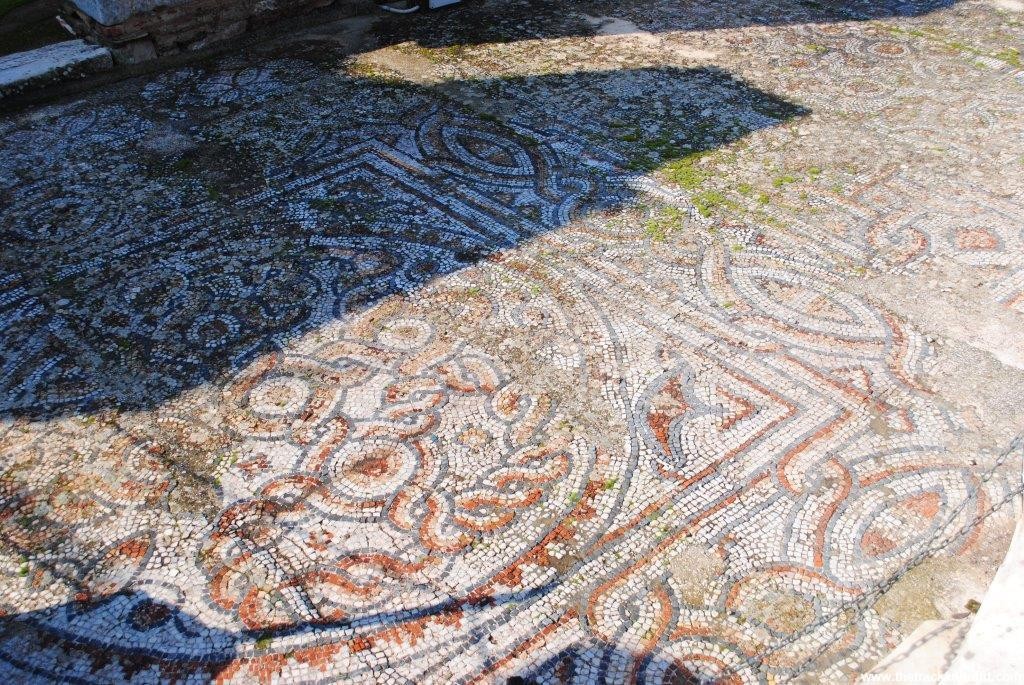 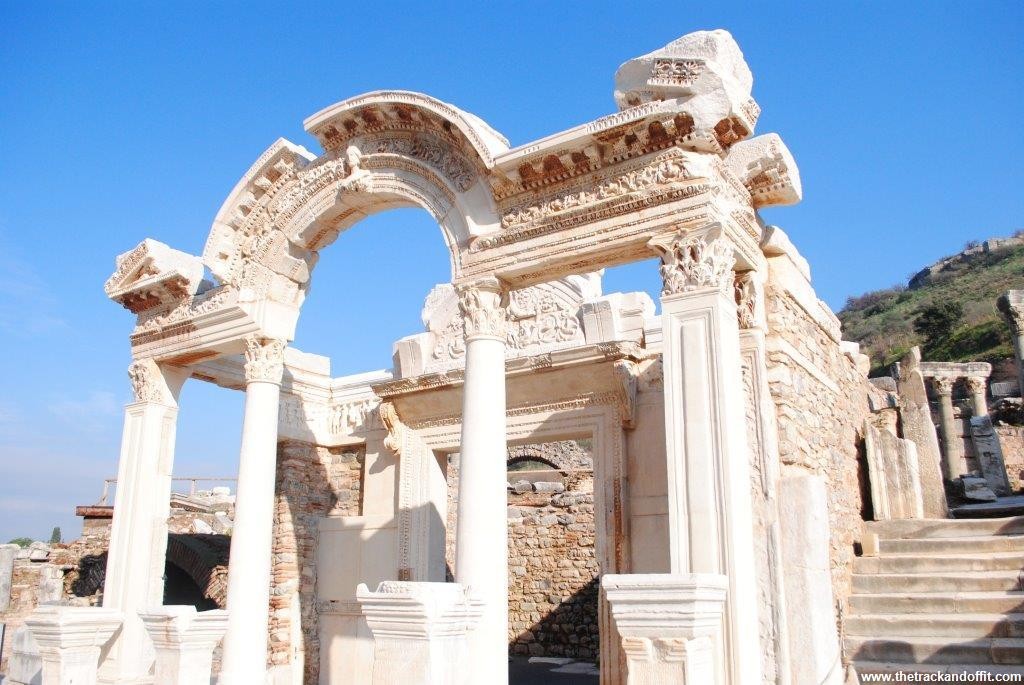 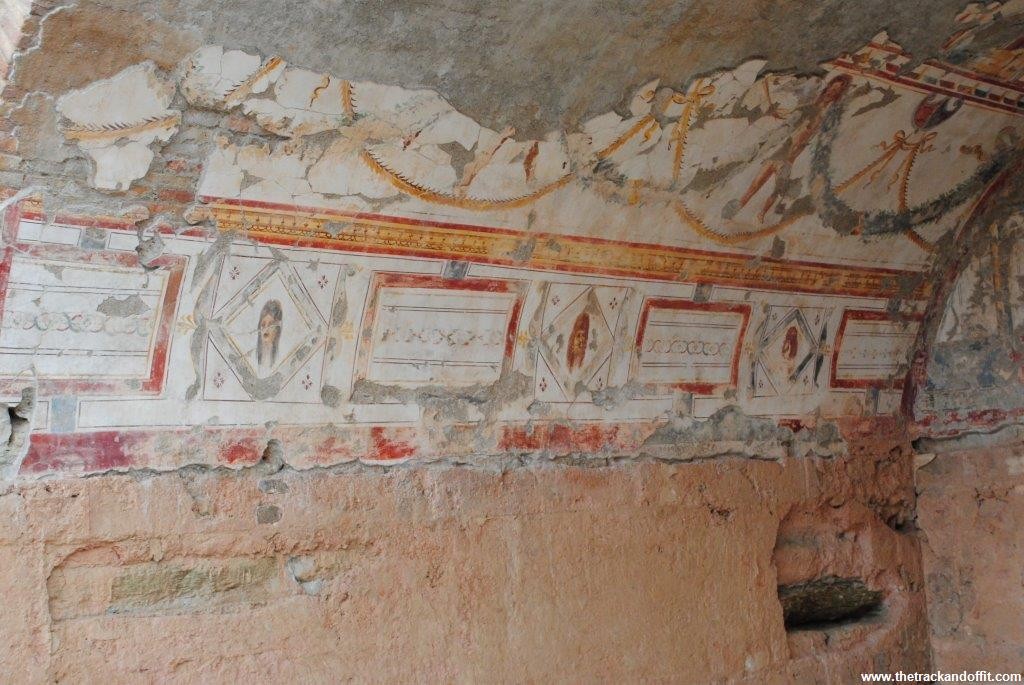 Fresco in the terraced houses 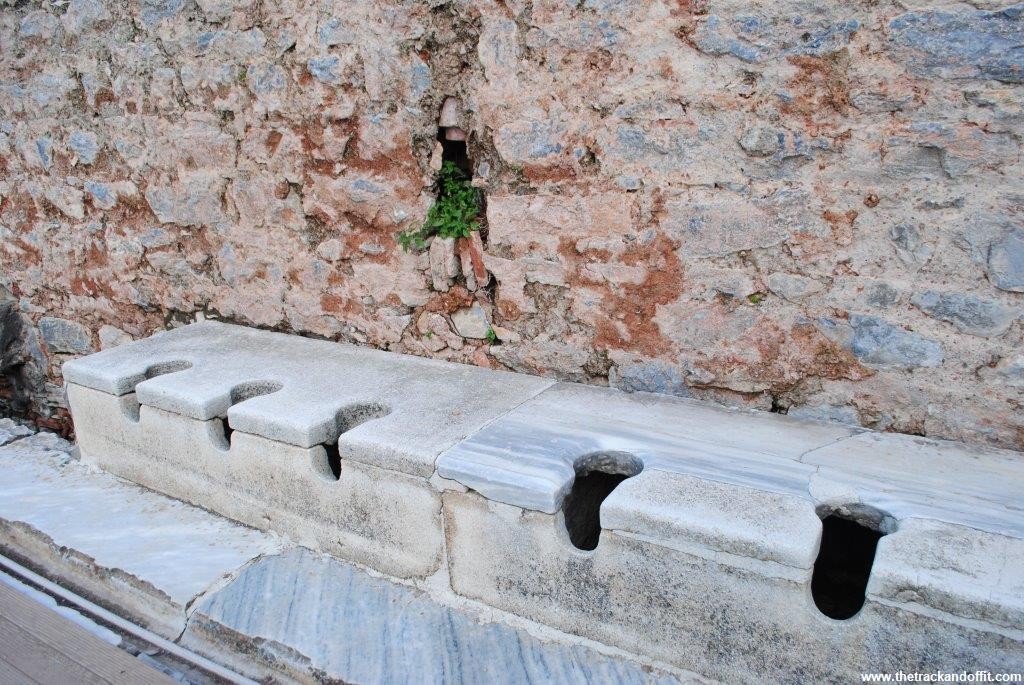 Latrines (obviously). Togas would have kept things private and an orchestra blocked out any embarrassing noises! 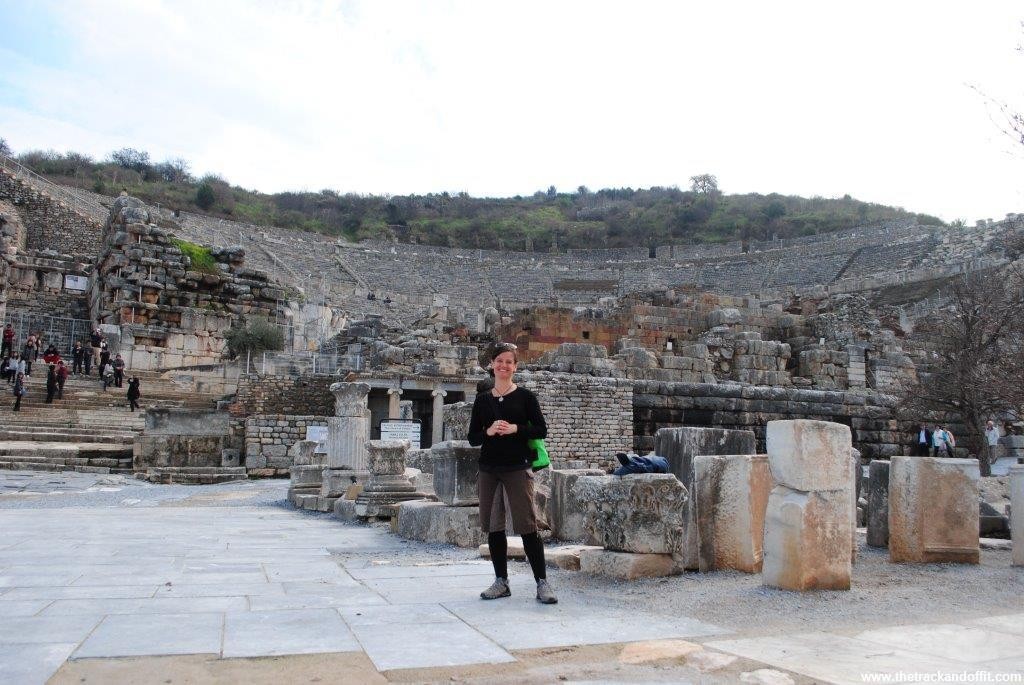 The enormous breakfast I’d eaten that morning (eggs, bread, pastries, tomatoes, olives, cucumber, cheese, meat – you know, the usual) meant that even after 2 and half hours of wandering around Ephesus, I wasn’t hungry. So the next stop was Isa Bey Mosque. 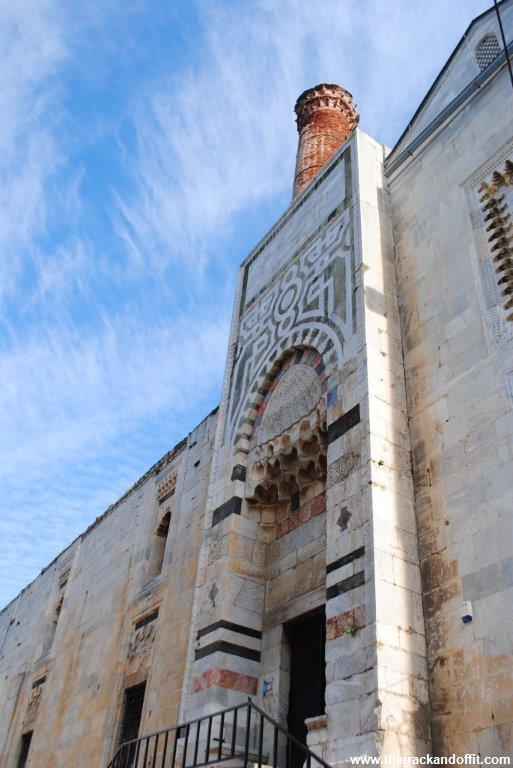 It’s a small mosque with a nice courtyard. At this time of year it was really peaceful. It’s also free!

I didn’t know much about St John’s before I got there. John the Baptist, who lived out his days in Selcuk, has a tomb there (though it’s now empty). The Cathedral is mostly in ruins but even so you can see how enormous it was. It it was fully restored it would be the seventh largest cathedral in the world. I really liked that they had a model reconstruction so you can match the ruins with what it would have looked like in its day. 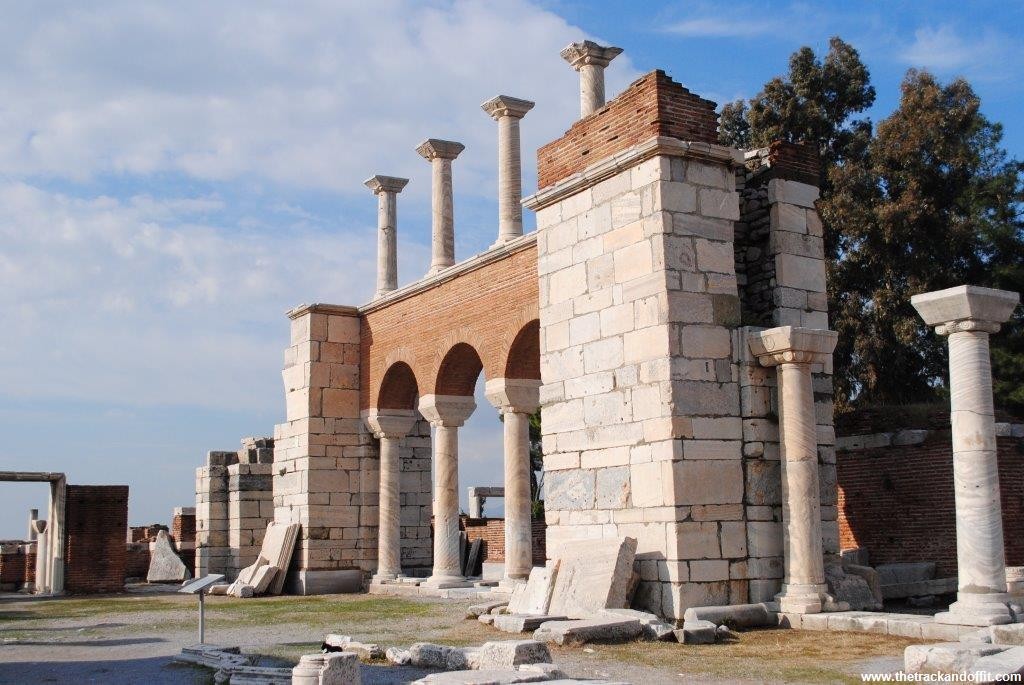 I walked to the top of Ayasoluk Hill to the newly reconstructed Selcuk Castle. There’s not much too (the ruins of a mosque, some cisterns and few walls) it but the views are lovely, especially on a sunny day. It would have been a good place to the watch the sunset but unfortunately the site closes at 4pm. 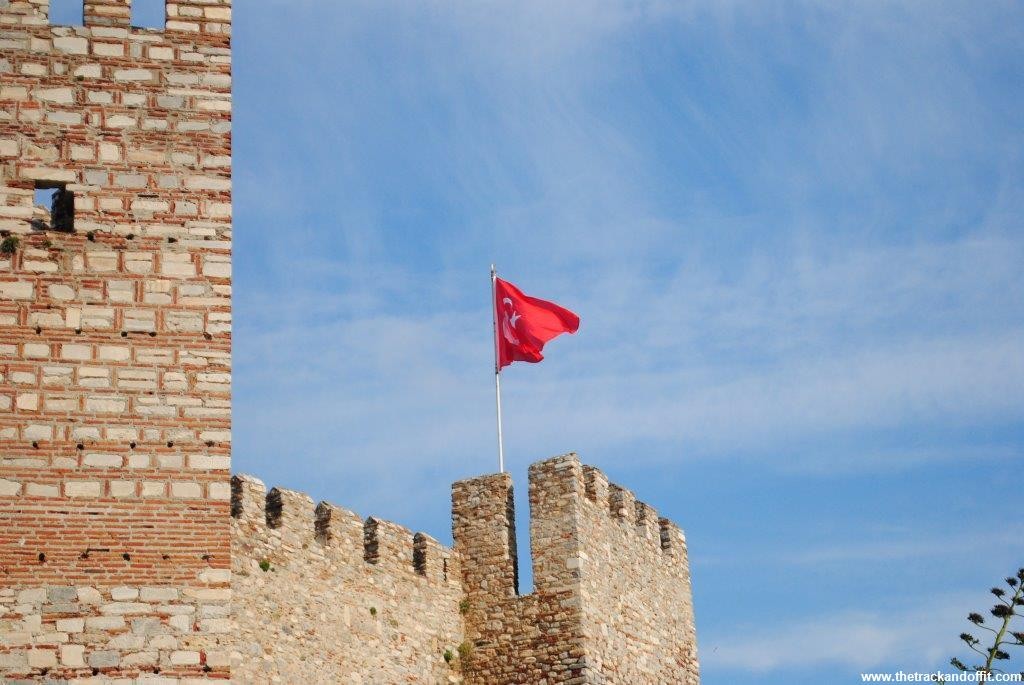 I was then taken to a local restaurant a couple of kilometres out of town for lunch. You’re given a plate and then you get to eat your fill of all the lovely dishes available. You’d be amazed to learn that I only had one plate. 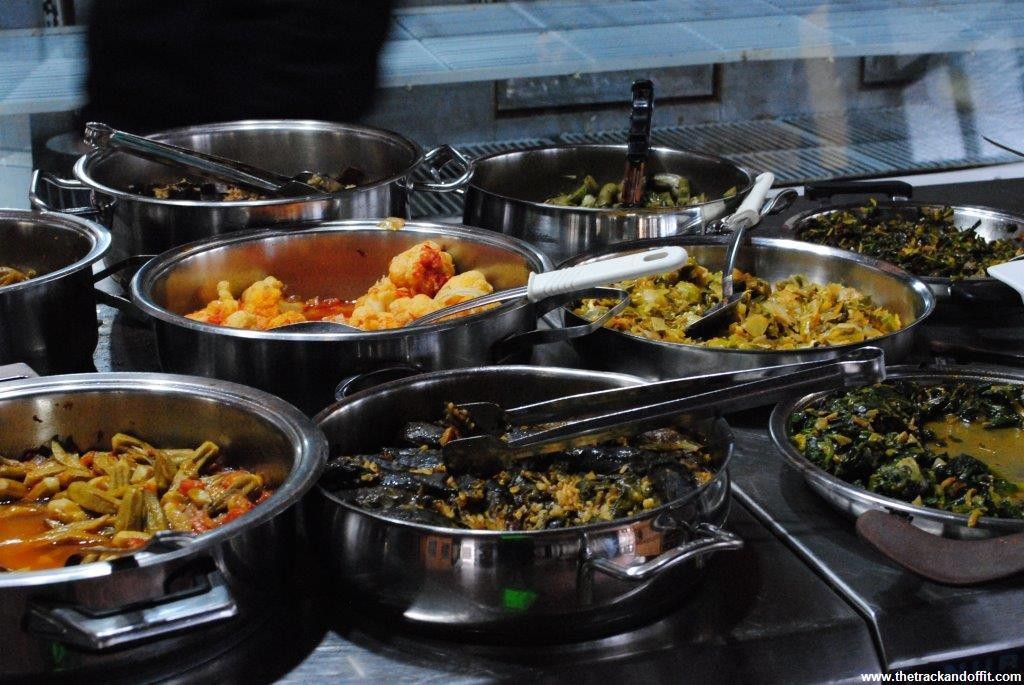 The family kitchen has also produced a recipe book, which was presented to me at the end of the meal. Now I’m set to make kofte and gozleme.

Sirence (which I learnt is pronounced something like Shee-reen-jeh) was high on my list of places to visit whilst in Selcuk. It was also confirmed I should go there by a tour guide I met on the train from Denizli (Pamukkale) to Selcuk so I was really pleased that it was the last place on the itinerary for the day. 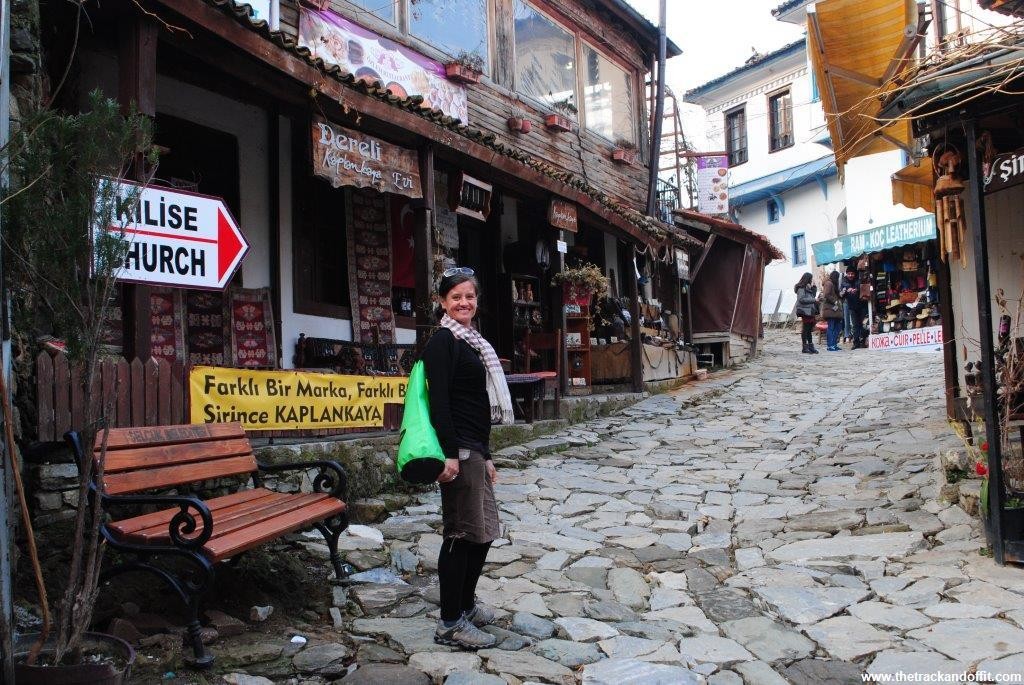 The Greek village has cobbled stone streets and some lovely architecture. We followed the stone up the hill to the ancient church, with it’s wonderful views across the valley. The views at the top made for a good Turkish coffee break. I never used to drink much coffee but being presented with thick Turkish coffee (I do have to take it with sugar) accompanied by Turkish delight, it just seems the right thing to do and I’m really taking to it. Also, I like this picture. 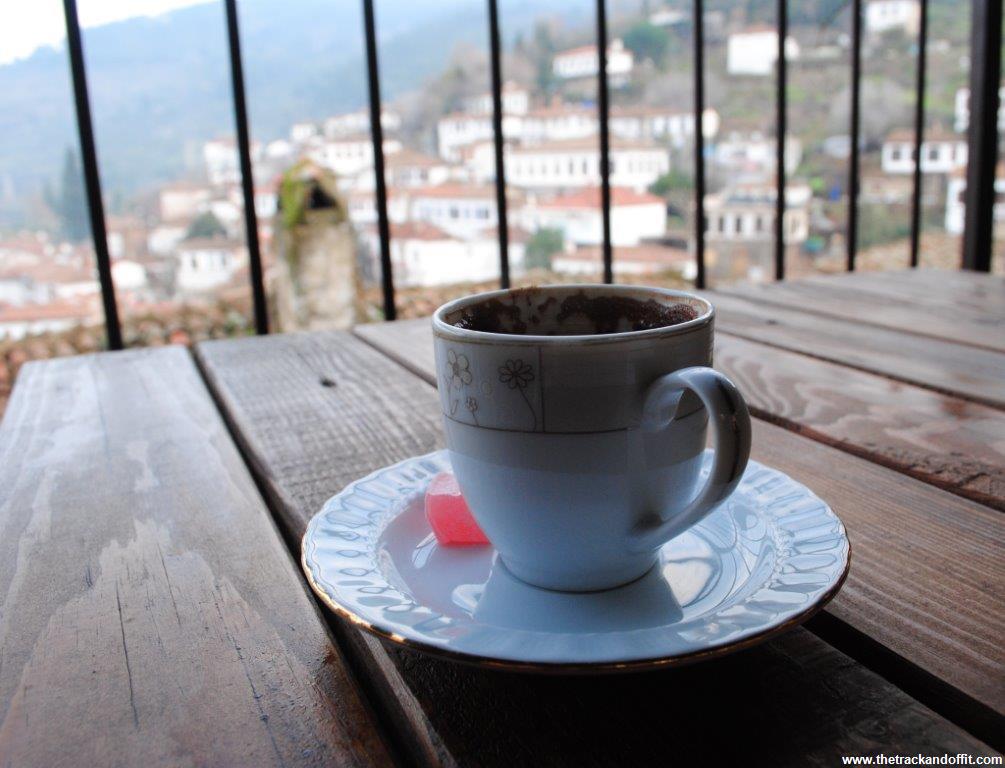 Admiring the view, I remember how lucky I am.

Another Day in Wonderland

The sun was shining on yet another very mild winter morning so I took one of the (free!) bicycles from Cella Hotel and headed out the road. The farm tracks nearby were still very wet and muddy so I went the long way round to visit the Seven Sleepers Hill (which I could see from my bedroom).

Seven Sleepers is where seven persecuted Christians are said to have fled on their way to Meryemana in 250AD and were then sealed inside a cave by their enemies. The cave was unearthed by an earthquake, 200 years later, waking the drowsy occupants. I like Mark Twain’s re-telling of the legend in The Innocents Abroad.

Now you can see a Byzantine church and necropolis with tombs for each of the seven sleepers which was discovered in 1927. It was a really peaceful place while I was there. I explored some of the paths and natural caves and, when nobody was looking, the caretaker unlocked the wire gate to the church so I could go in and have a closer look at the ruins. 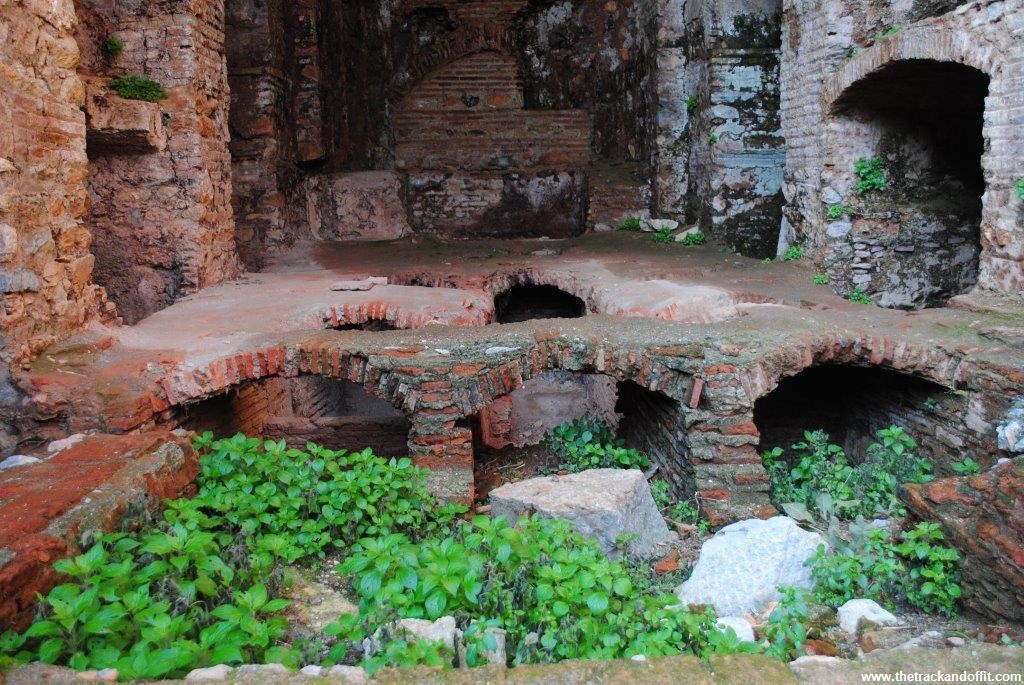 He also wanted to take a hundred pictures of me on the hill. 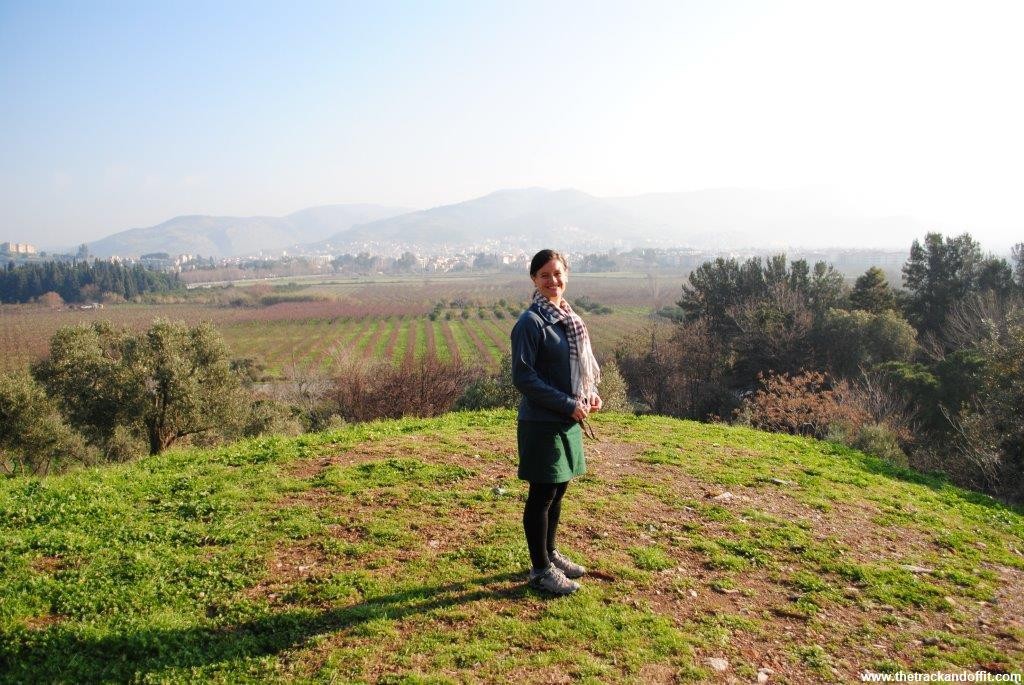 I then cycled over to the Temple of Artemis. There’s not much there now, more ducks and geese than stones but this was one of the Seven Wonders of the Ancient World and was impressive and enormous (a model at the Ephesus Museum put it all in perspective for me). 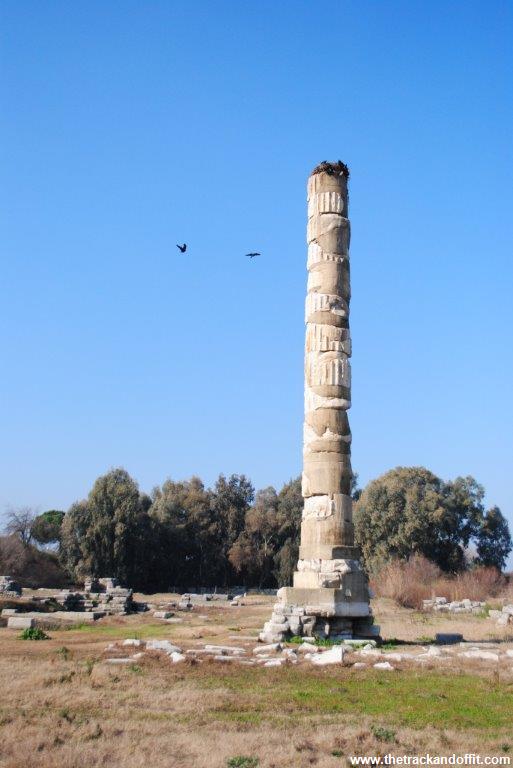 Ephesus Museum itself was my next stop. It’s a modern building next to some ancient Roman baths. I spent an hour or so checking out statues and artefacts found among the ruins of Ephesus. 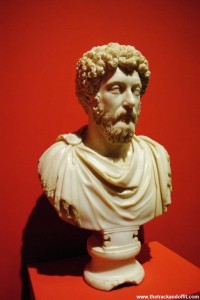 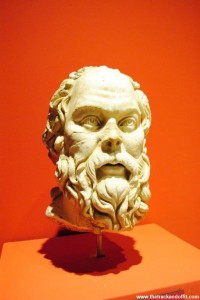 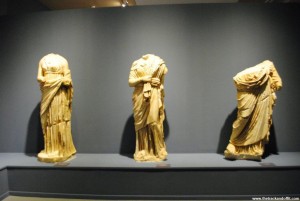 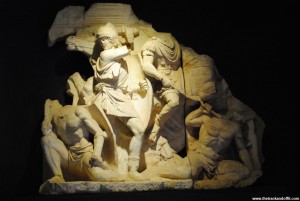 I wish I’d gone to the museum before visiting the ruins. The displays gave a timeline of the life of the city and explained where various statues were found and described some little details I would have looked out for on the site.

A massage back at the hotel topped off an excellent morning.