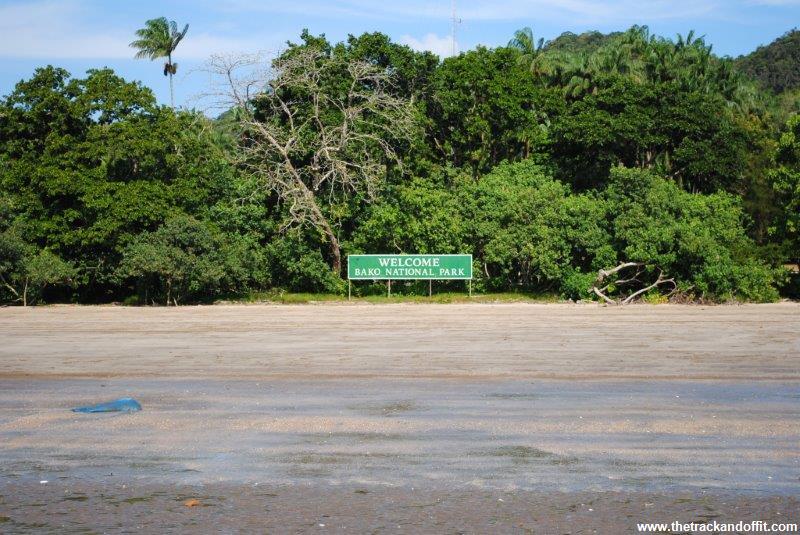 Okay, so I haven’t been to EVERY national park in Borneo (it’s a big island and I was only in Sarawak) but of the three I did visit in the north west of Borneo (southern part of Malaysian Borneo), Bako was definitely my favourite. They have proboscis monkeys there. 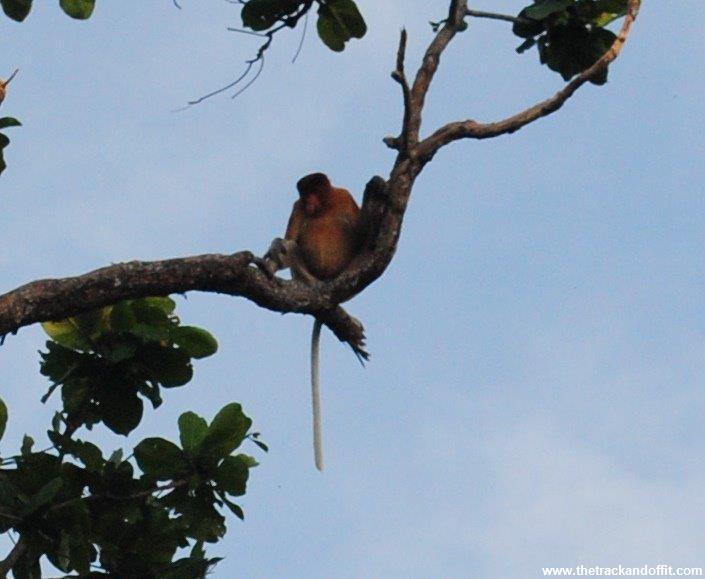 Bako feels like it’s on an island all by itself, you can only get there by boat. It’s an easy journey but you first have take a bus from Kuching, then a boat to the coastal entrance of Bako National Park. 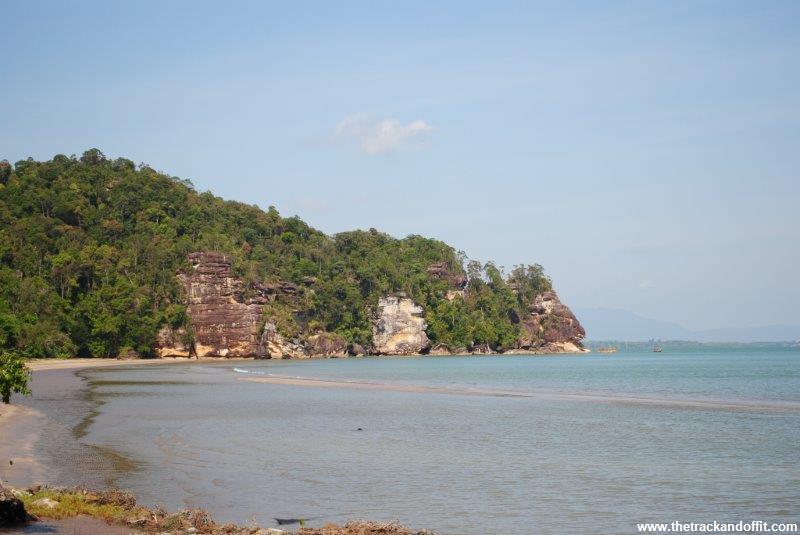 As well as being my favourite, it’s popular with practically every other traveller to Sarawak. Because the best time to see wildlife is in the early evening and the last boat from Bako departs the shoreline at around 4pm (it changes) it’s also popular and recommended to stay overnight. But good luck and forward planning are required as the park accommodation fills up fast. However, perseverance can pay off. I visited the park office in Kuching every day and eventually there was a cancellation for a cabin for three. Enter, Awesome George and his brother Tom. With my pal, Pal, moving on to Langkawi (I believe he was chasing pretty girls), it seemed like a perfect twist of faith that a three-person space had opened up. So after another awesome bowl of laksa and a three layer, we hit the national park. I enjoyed the adventure of a bus and boat trip to get there. There are all sorts of warnings when we arrive about not keeping food in the rooms. Seeing a number of macaques worming their way through louver windows to get into rooms and eat all the biscuits (who could blame them?) led us to believe that we should pay attention to the rules. After throwing our bags in the room (and sealing everything tightly) we hit the first trail, leading to the beach (across the water). 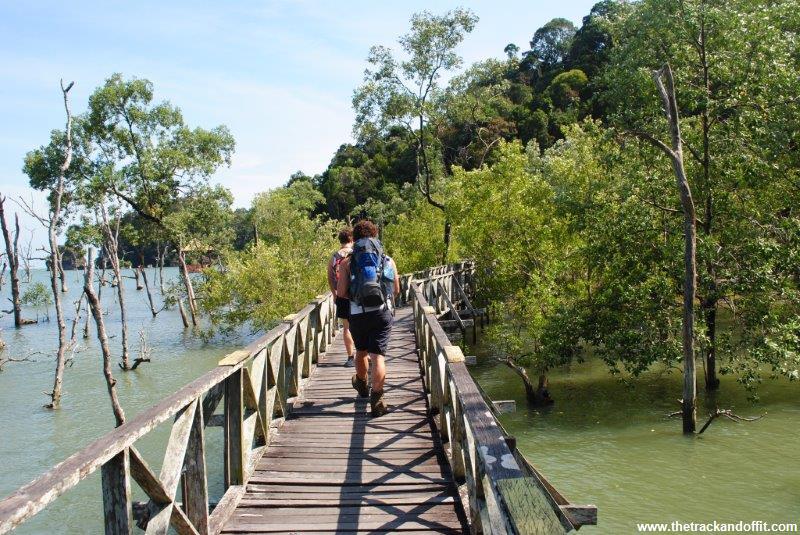 My friend Kate had told me that at certain times of day, proboscis monkeys either hang out at the beach or are making their way back from the beach. We kept our eyes peeled for a glimpse. 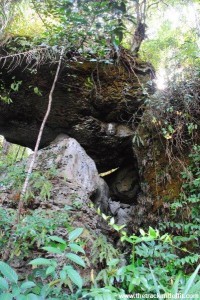 We were following a group of photographers with serious equipment and a guide/spotter. We figured we were in a pretty good position. It turned out that they should have been following us. Eagle eye Tom spied a lone, fat-bellied proboscis monkey high in the trees. 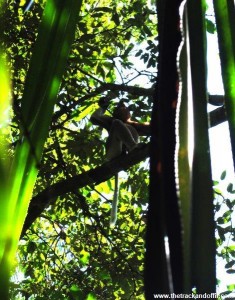 We eventually walked further along and let the photographers know what they’d missed. Their spotter guide looked kind of embarrassed. When we got the beach the only monkeys were these large ones, just hanging about. 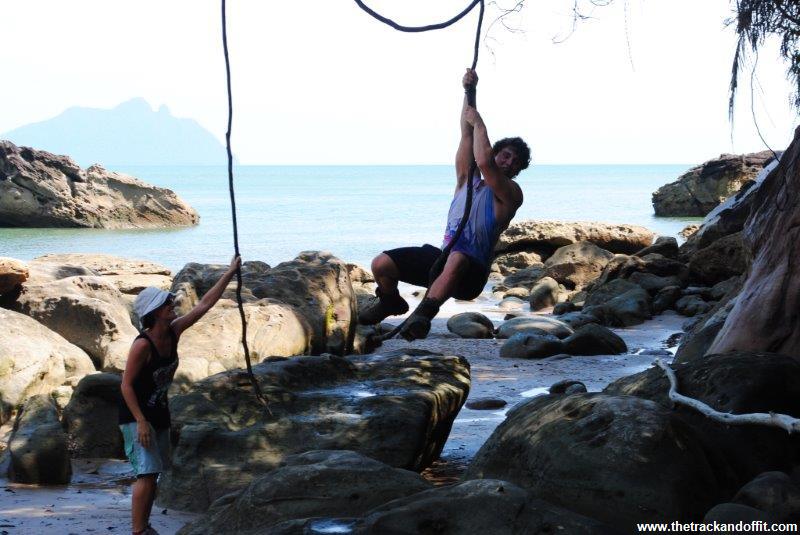 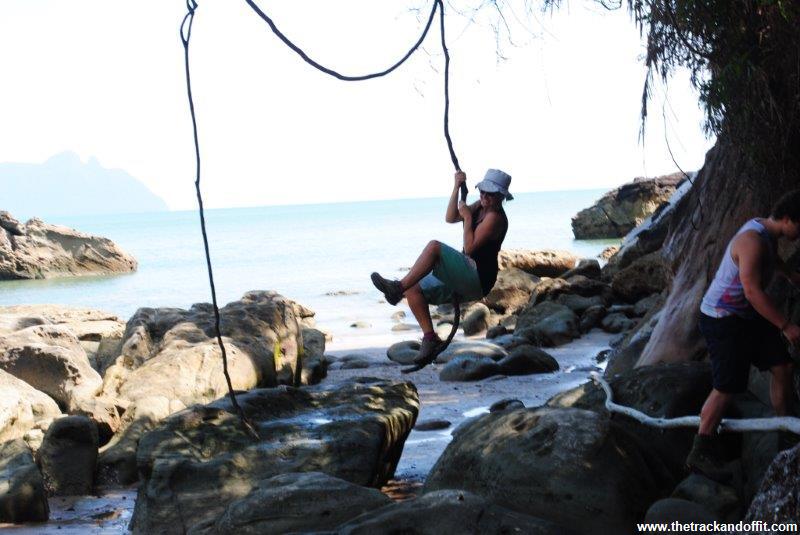 The beach trail was quite short so we after a picnic lunch we headed further into the national park. We thought it was an excellent idea to go walking on the high exposed boardwalk and rocky mountain tops in the middle of the day. 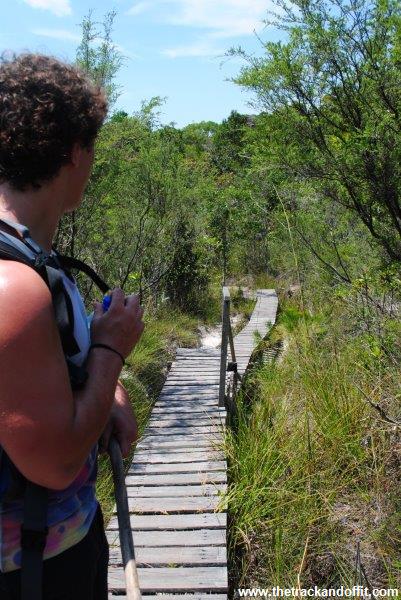 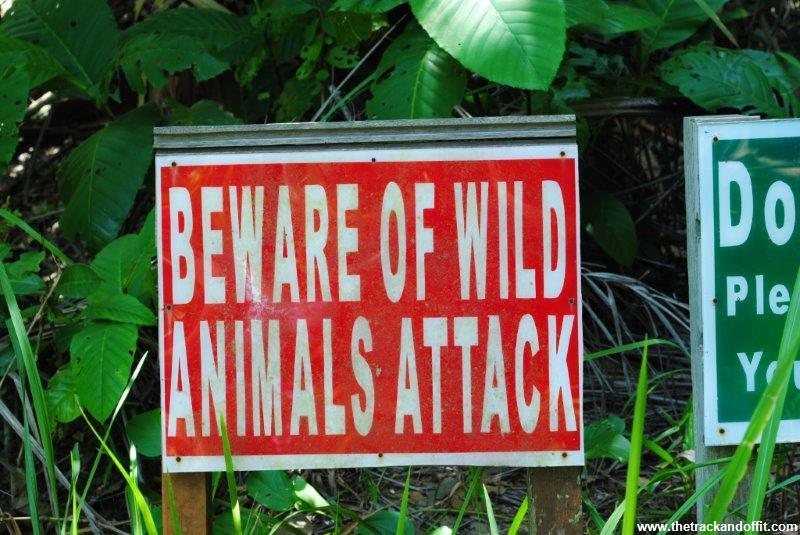 Luckily, there were no wild animal attacks and just when we thuoght we’d melt, we spied this little gem. 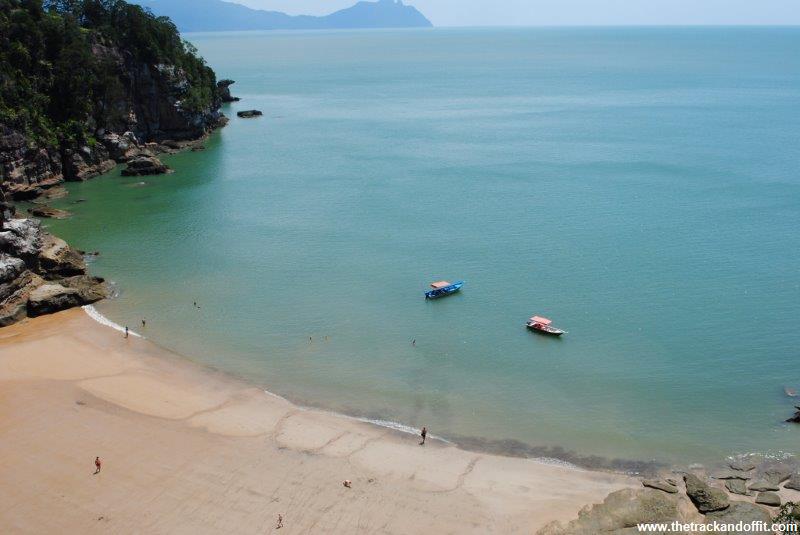 We spent some time running, swimming, jumping and exploring the rocks and sand and felt quite superior to all the other folk who had hired small boats from the park entrance to skip the hike and land directly in the cove. We also had sunscreen so we didn’t get burnt to a crisp like some girls we met on the beach. The hike back to basecamp was more eventful with animals but, thankfully, no wild animals attack. 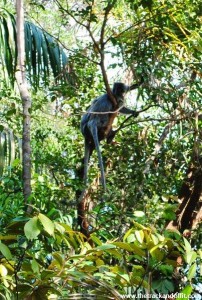 All the action was back at park HQ though. The bearded pigs which live under the office buildings came out to play on the beach. They honestly have hairy chins. 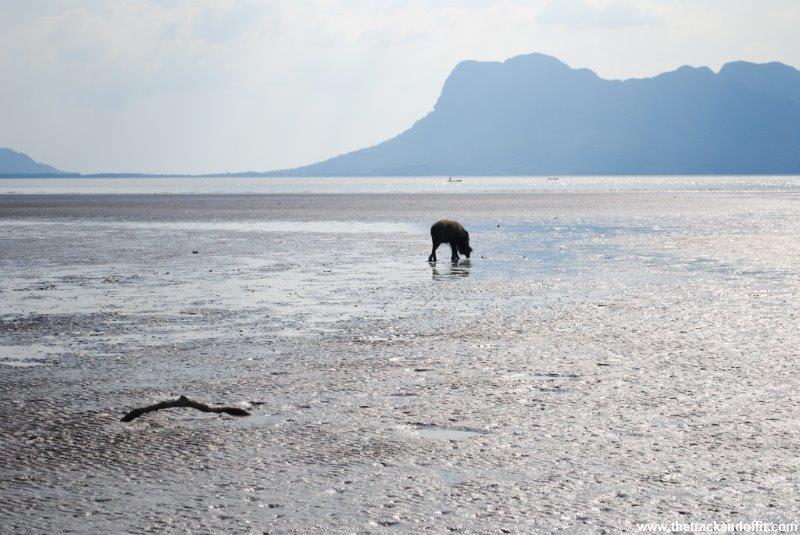 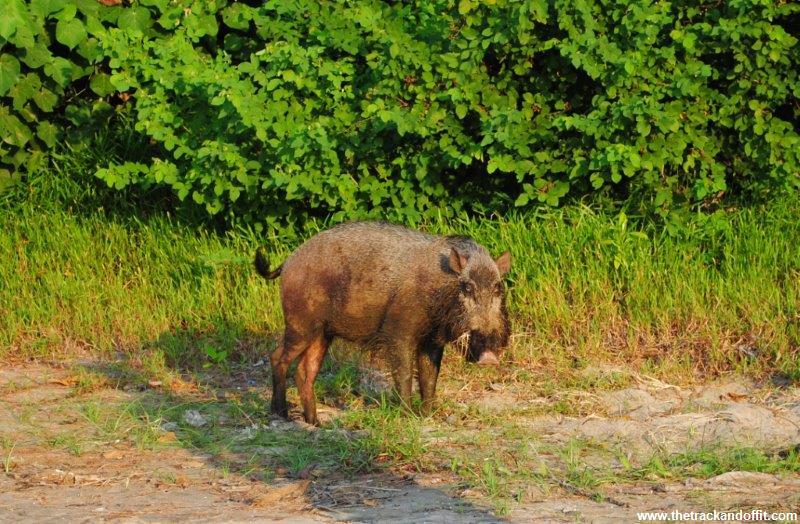 The early evening, after the boats with the day trippers had departed (definitely try to stay the night), loads of proboscis monkeys climbed the trees between the beach and park headquarters. We spent hours watching them. We got more of a close up look and I’ve never seen a monkey like it. Ginger hair, a big hooked nose and a pot belly. Gosh, they look funny. When they jump from tree limb to tree limb they still somehow manage to look graceful, despite leading with a belly that looks pregnant or full of food. 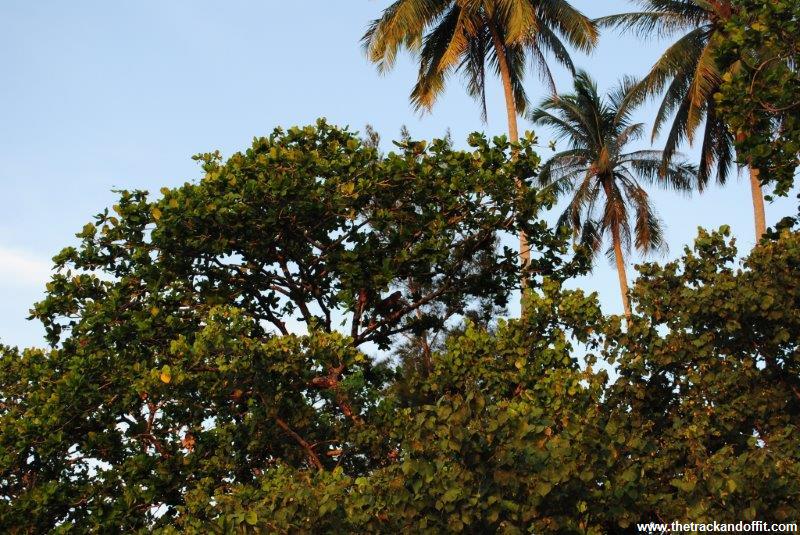 Honestly, they’re up there 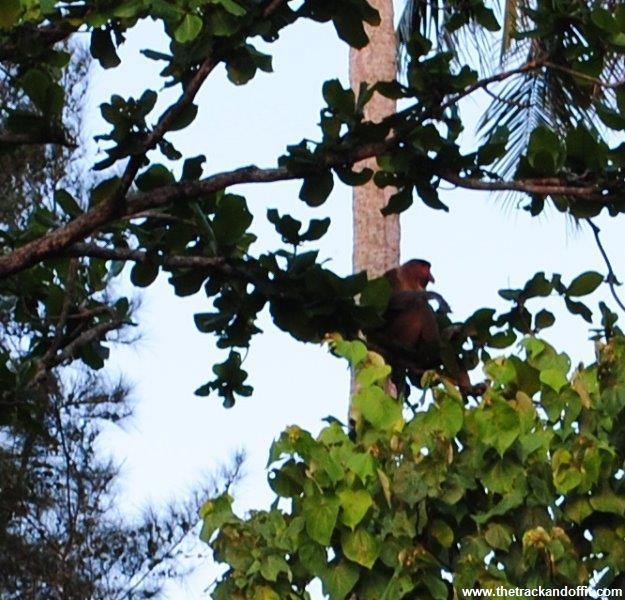 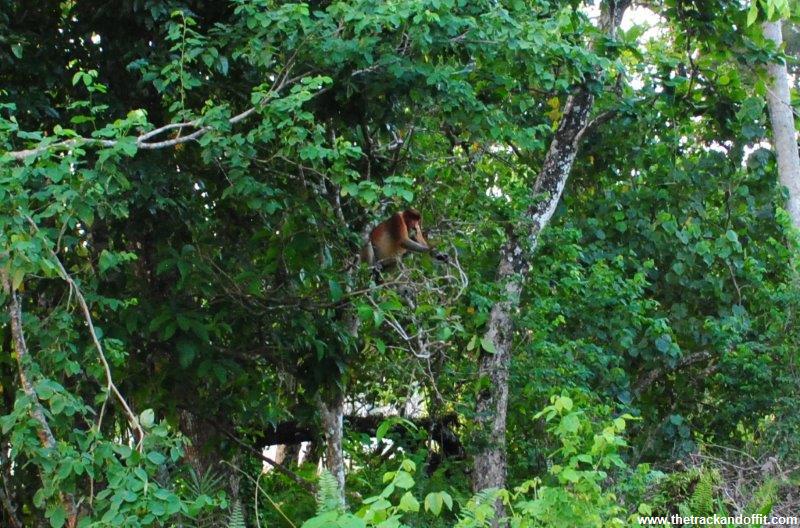 I wish I’d packed my longer lens. A night time walk wrapped up our day of adventure. This time the park guides were excellent at spotting the wildlife. We almost immediately saw a flying lemur and it’s tiny baby. Birds, spiders, turtles, stick insects, poisonous frogs and all many of other small creepy crawly things rounded off the evening. (Sorry, the pictures turned out badly.) 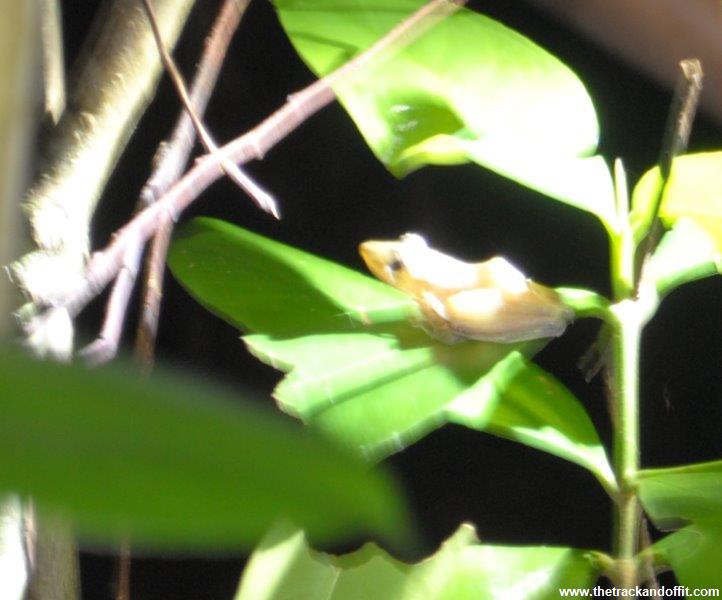 This is why Bako is my favourite – beaches, jungles, mountains, coves, animals.