Although I only started work about three weeks ago, I’ve already lucked out with a mini holiday. The school was closed for three days for Chinese New Year at the end of January so I had a glorious five days off. I kind of needed it too, not being used to having a job I can’t do from the beach and all.

So what to do with my time off? Barry is now in Saigon, connecting with other location independent, web entrepreneur type folk. Luckily, my passport came back with my new Cambodian work visa just in time for me to book a flight (okay, so I had two days to spare, what was I worried about?).

Chinese New Year, or Tet, is a really big deal in Vietnam, much more so than Siem Reap. I was warned that everything would be closed as families travelled back to home villages to see their relatives for the five or six day celebration, or simply shut up shop to spend time at home with loved ones.

I was looking forward to the difference that would make to Saigon’s motorbike filled busy streets.

It was certainly quiet but by no means ‘dead’. We stayed in District 1, the centre of town and the centre of backpackerville which wasn’t as shut down as expected. Taxis, motorbikes and tuk tuks still plowed their way along the streets. There were just breaks in the traffic this time. The market was closed and fewer souvenir shops open. Luckily for me, cafes and restaurants still plied their trade, including my favourite pho place, which in the last year and half has become a lot busier, has a name (Pho Quynh on Pham Ngu Lao) and the staff wear matching t-shirts. They still serve up the best pho in town. It’s not the only thing to have changed. Restaurants have closed and have been replaced by bars or other eateries, upmarket shops have opened and the outside of the buildings have been spruced up, painted up or built up. Another sure sign of progress (though not a good one) is the presence of Burger King, Subway and Starbucks. McDonalds is opening later in the year.

I prefer to remember the city with just the small restaurants and streetside noodle bars. 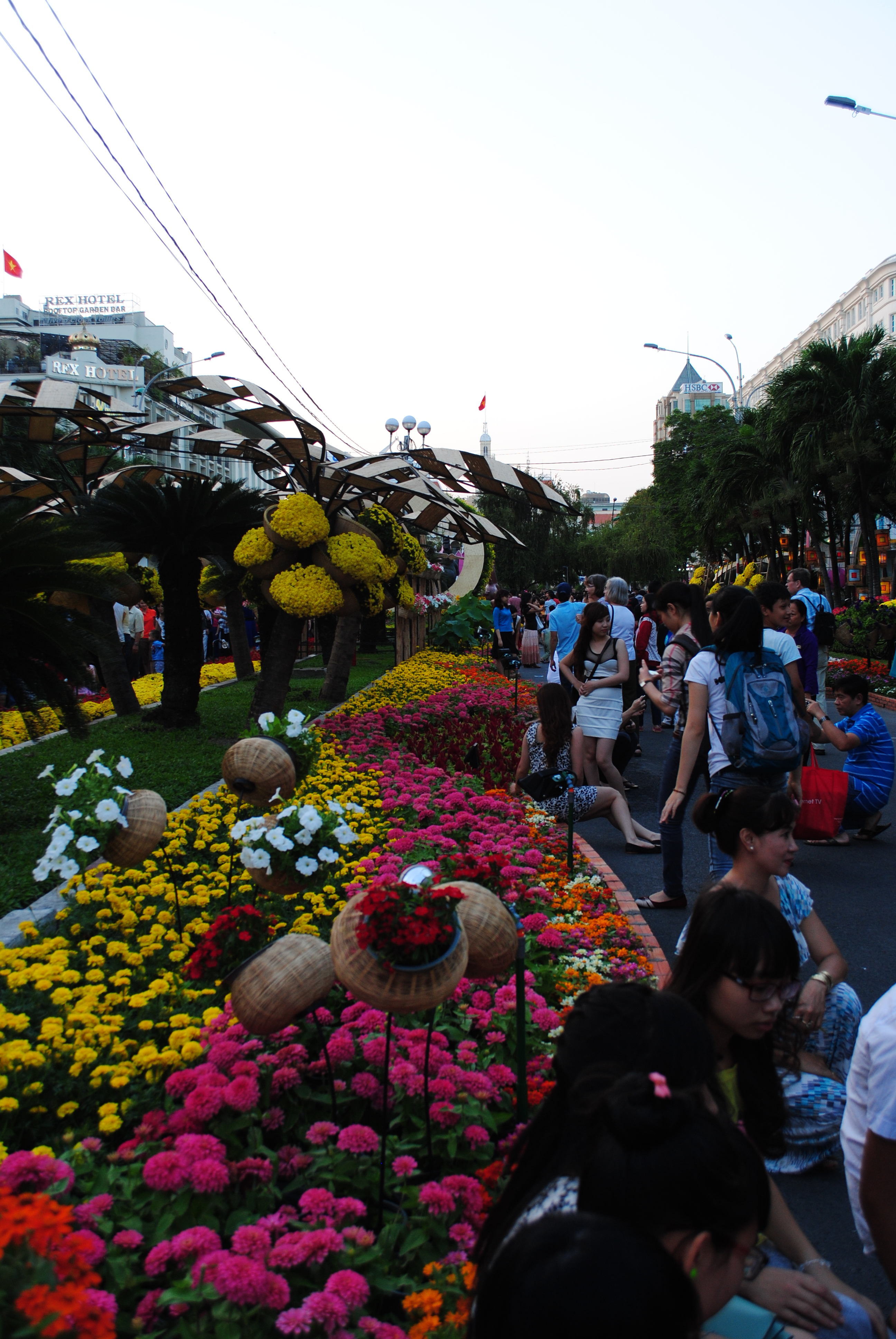 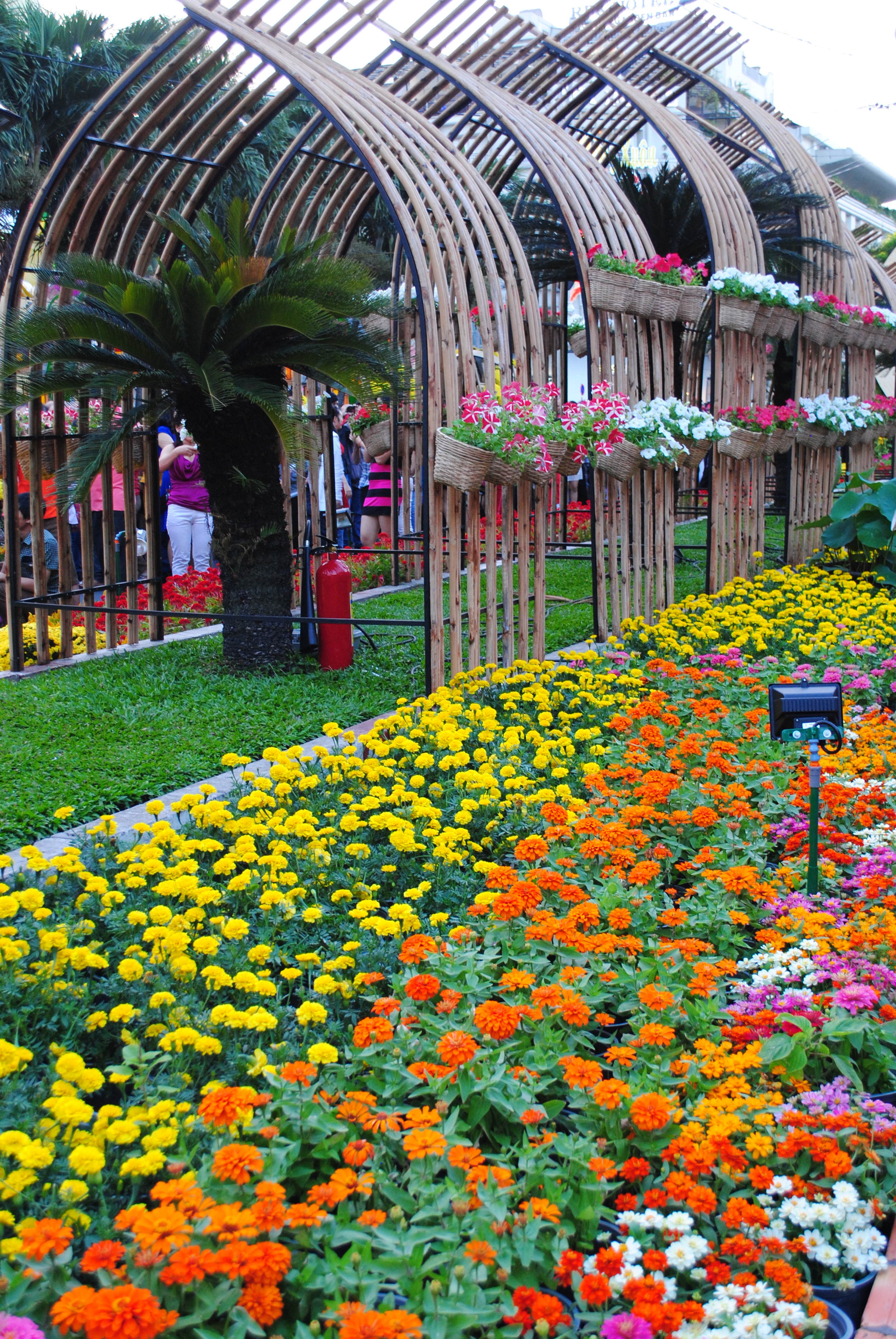 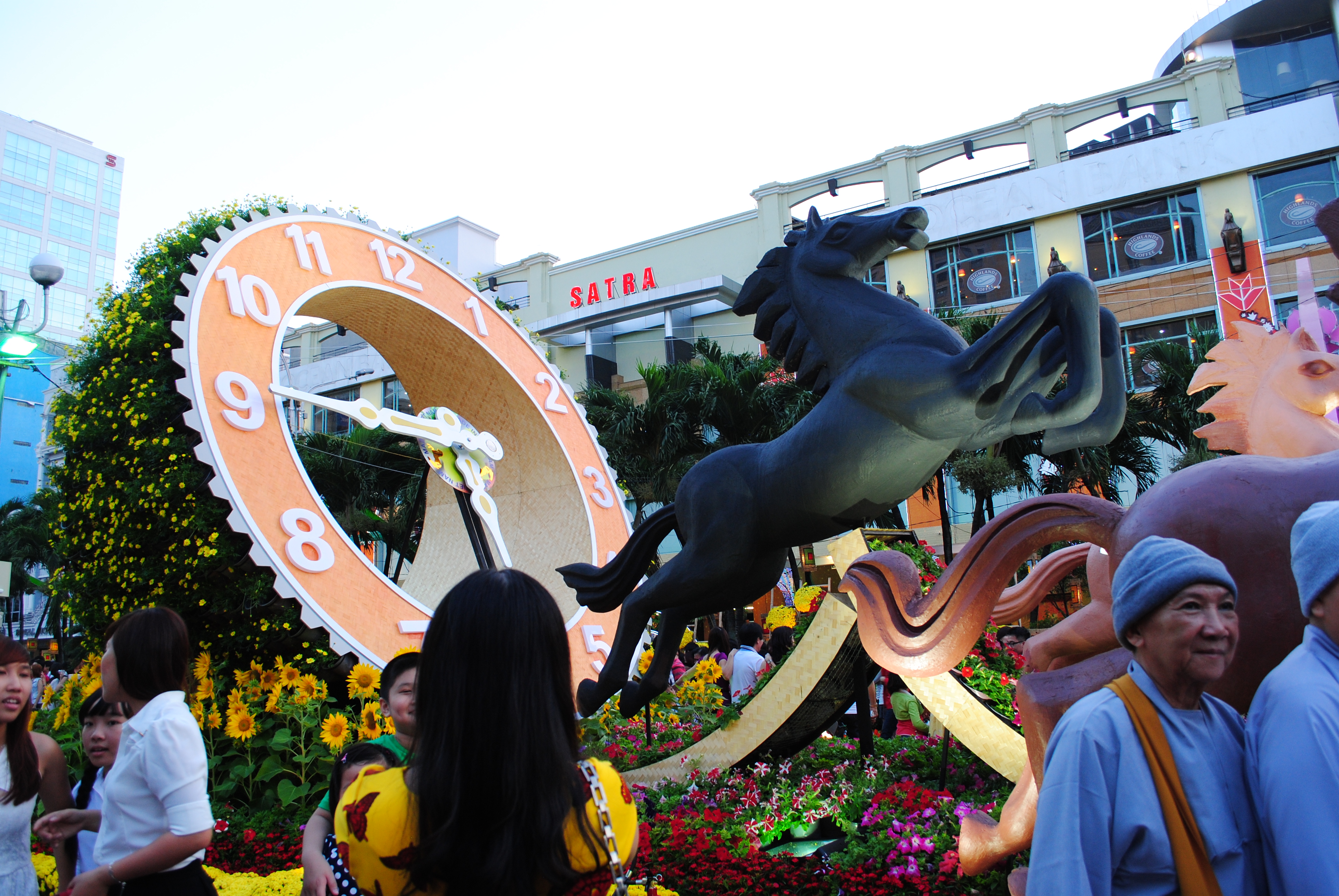 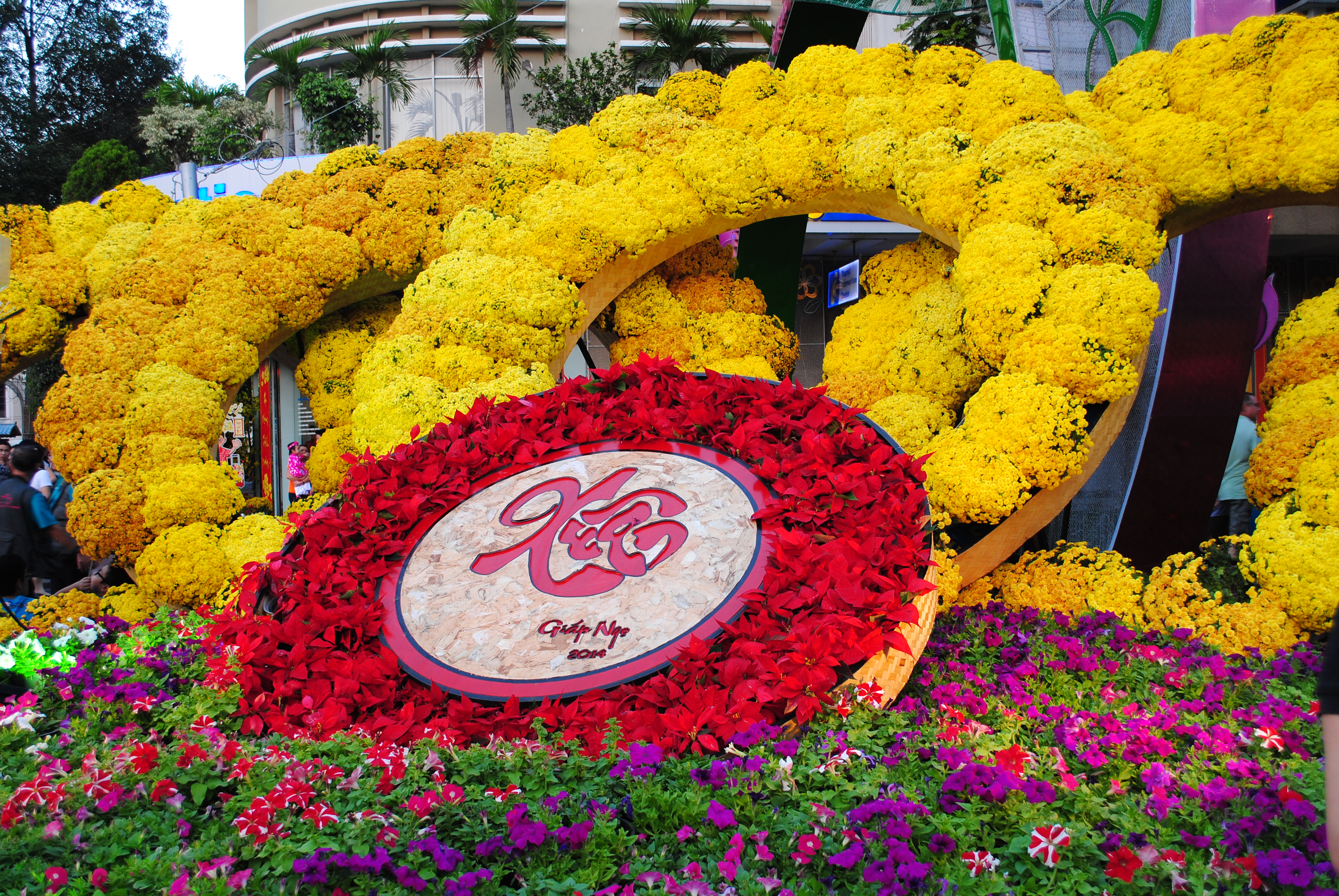 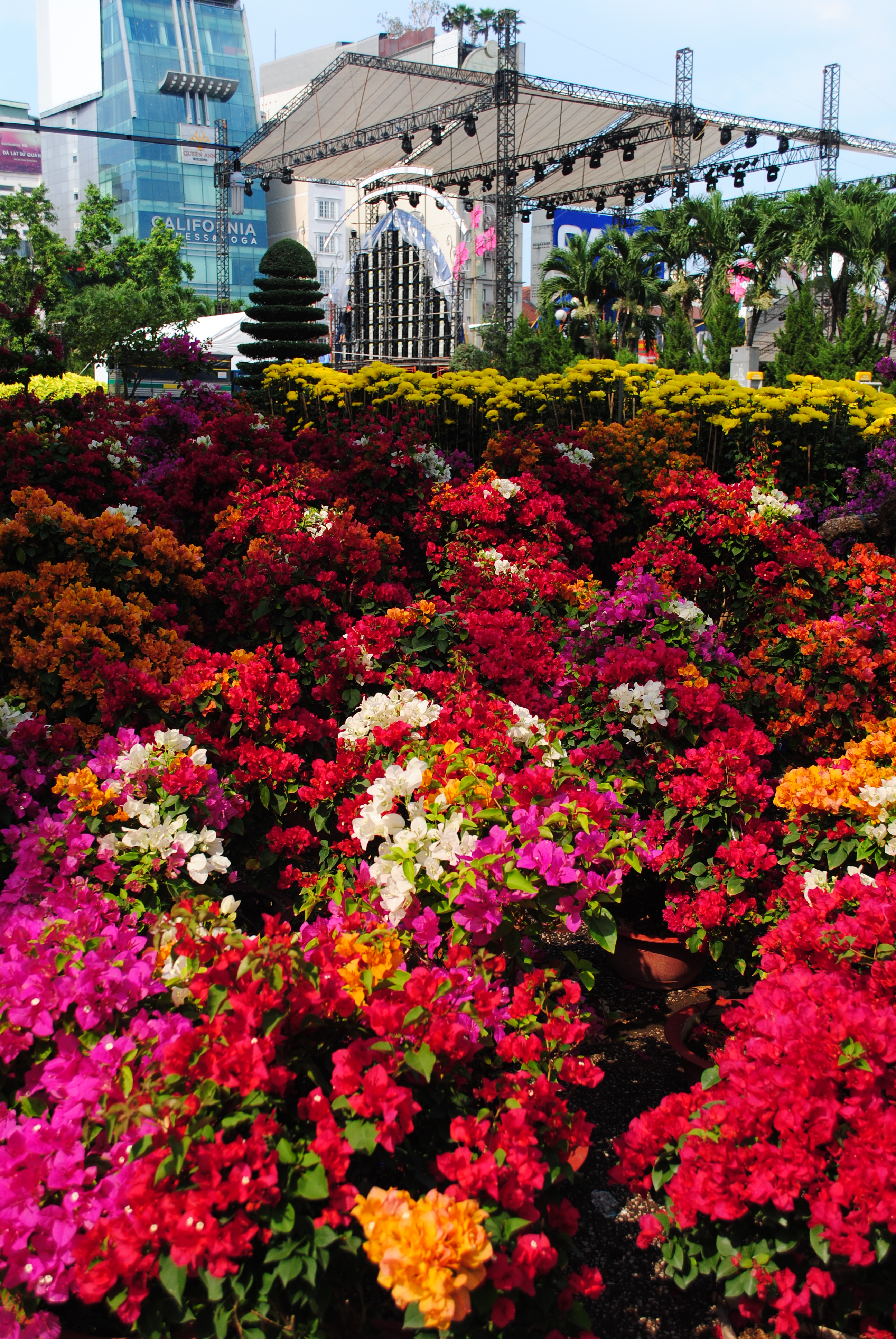 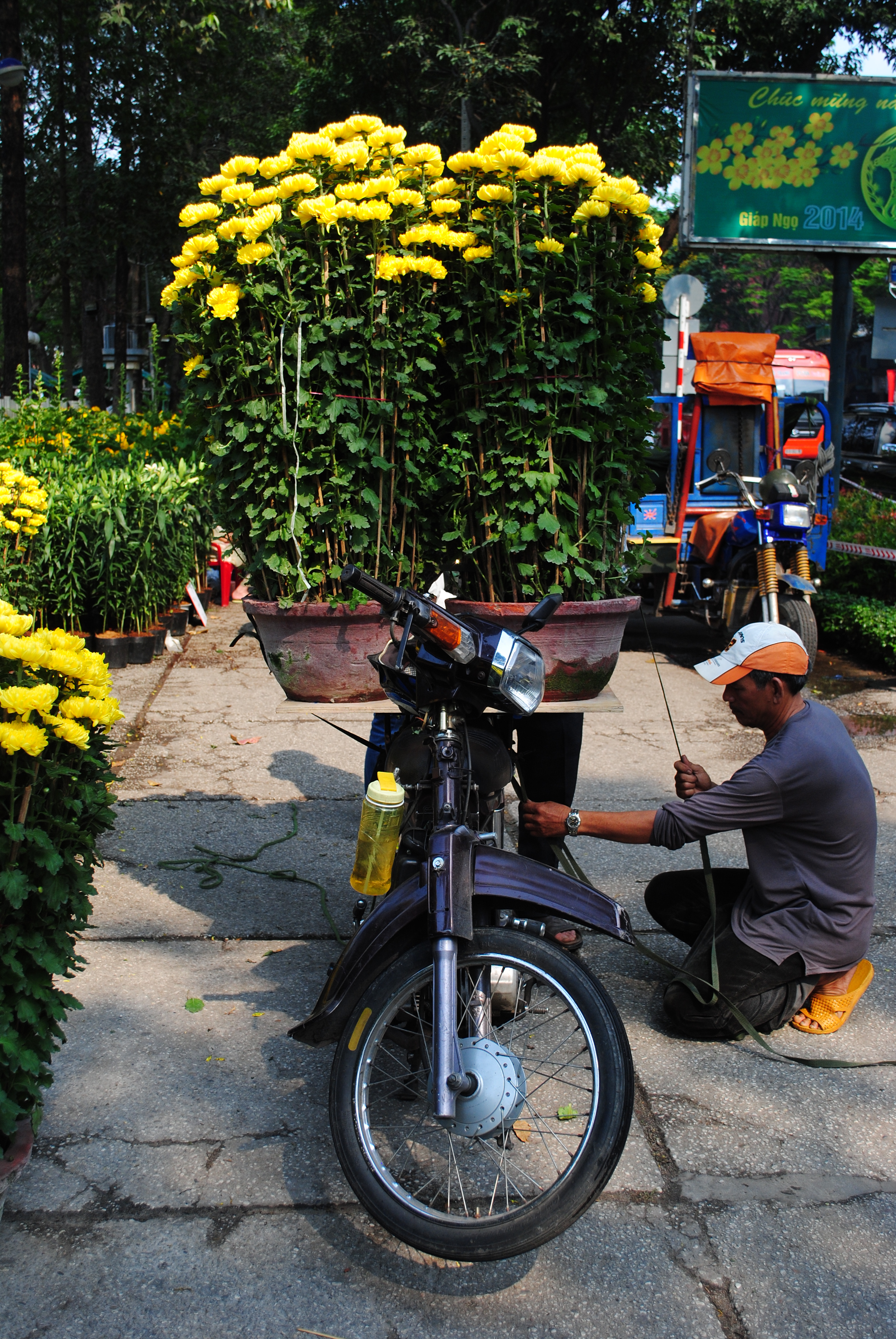 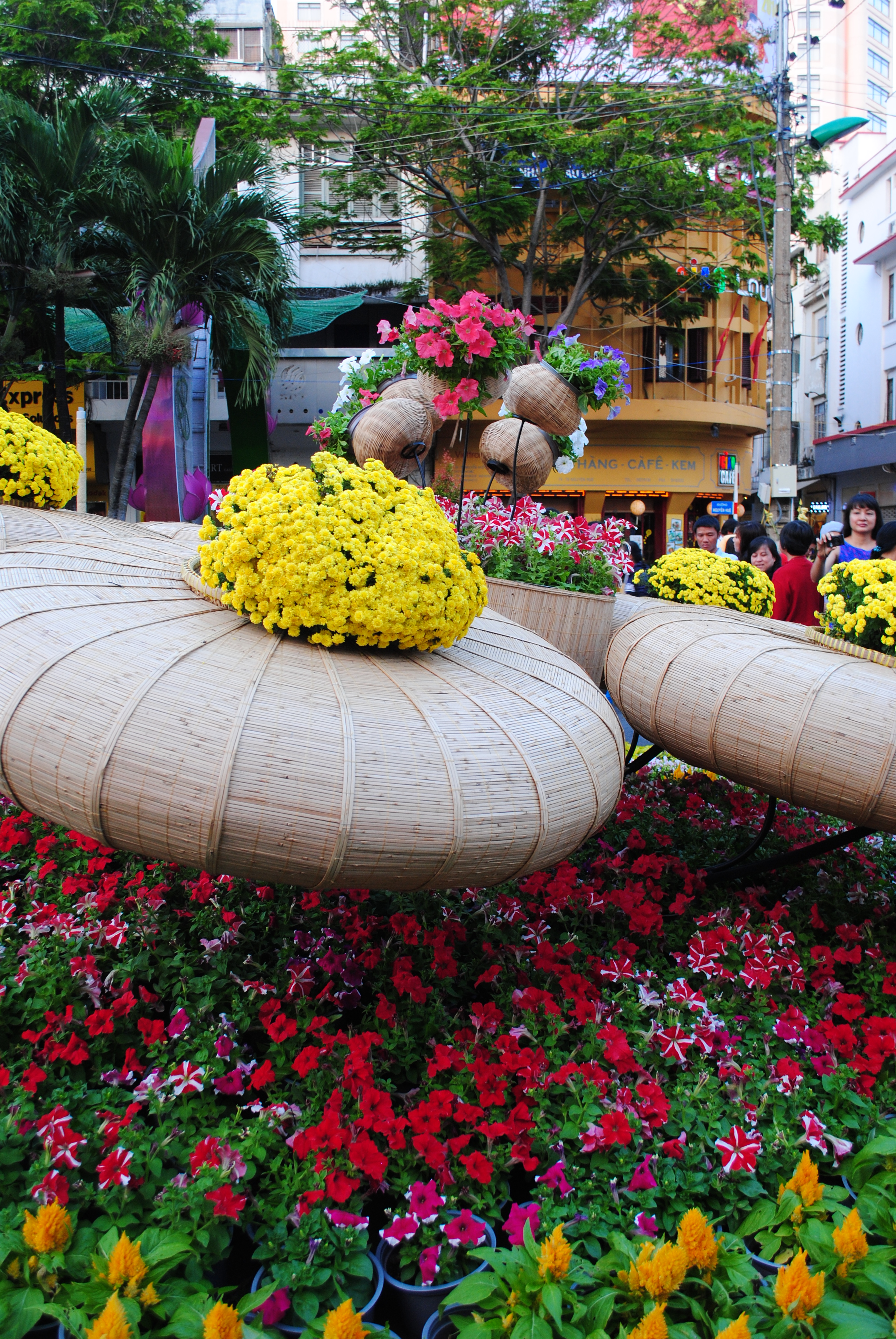 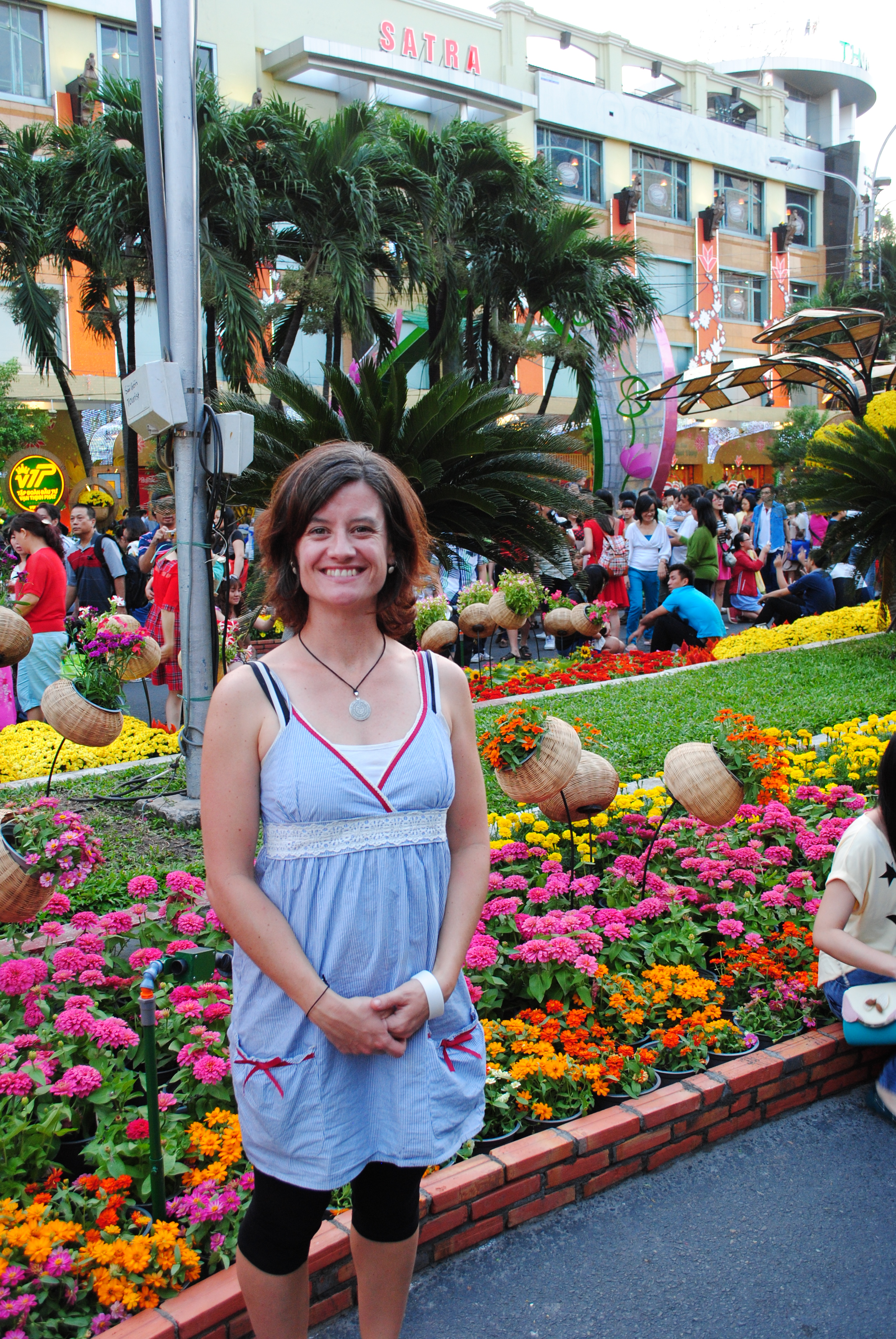 But what of my ‘C’ challenge. Saigon does not start with a ‘C’. I tried to make Ho Chi Minh fit but I thought that was pushing it, even though I am making up my own rules. Cu Chi tunnels were out, I’d been there less than two years ago. Same thing for Cao Da Temple in the Mekong Delta (I was starting to think I should have started the year with ‘S’ for Siem Reap and Saigon). But a map revealed a place I could get to in a short space of time.

So, off to Cholon, otherwise known as Chinatown, we went. Way over in District 5, we walked there. It took over an hour so I feel it was reasonable journey (at least I didn’t cop out with staying at the Cute Guesthouse or something) and we had to dodge some junkies in a park too.

In Cholon, the pagodas were in full swing. We stopped at Phuoc An Hoi Quan Pagoda, where the air was filled with incense and there is a wooden horse which brings good luck to those going on a journey, in exchange for an offering and a rub of the mane (Barry would probably say it’s bollocks). I thought a bit of good luck for my own journey wouldn’t go astray but the prayers of the local people seemed to be intense and I didn’t want to disturb the moment, especially as I’m not actually Buddhist. We quietly departed. 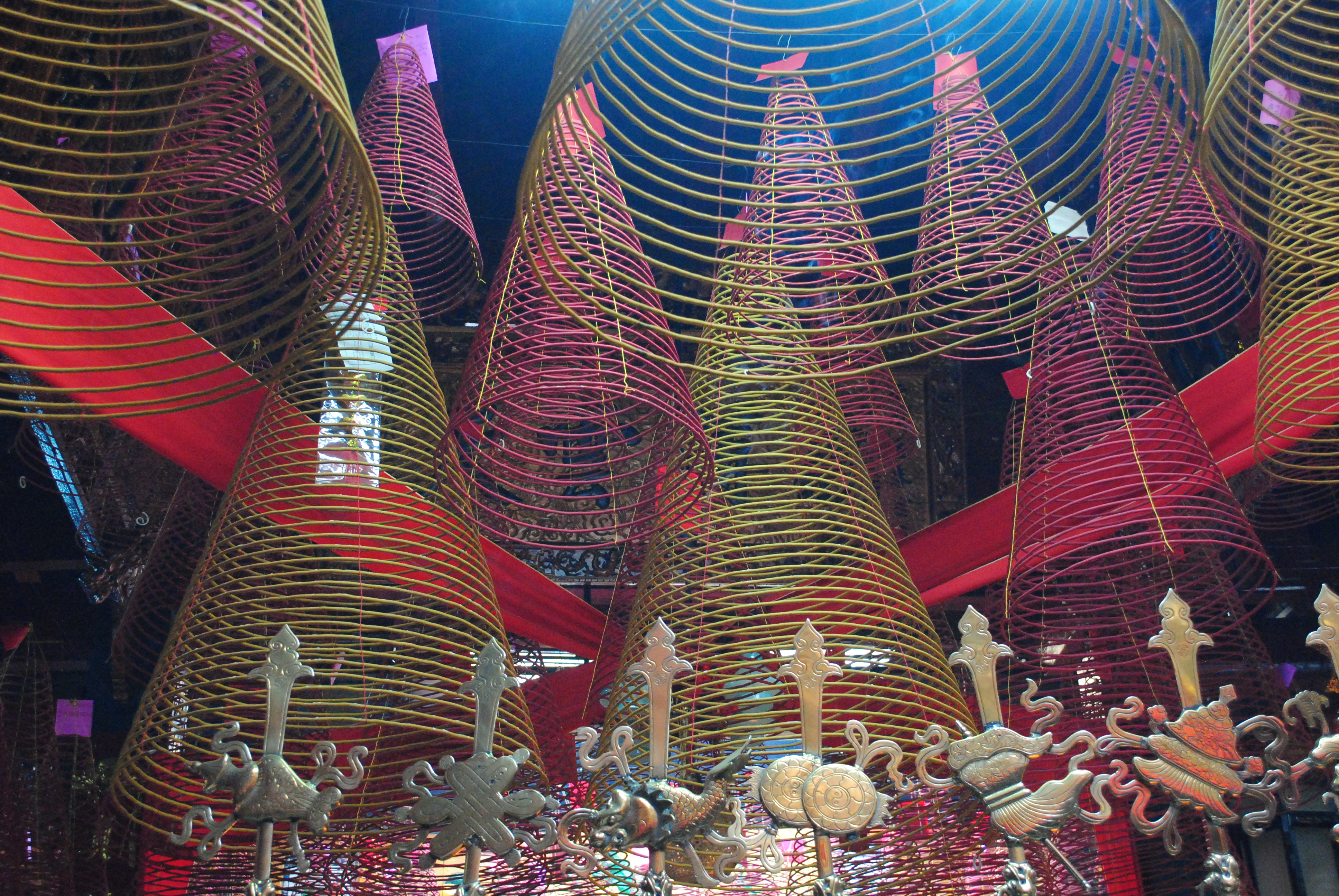 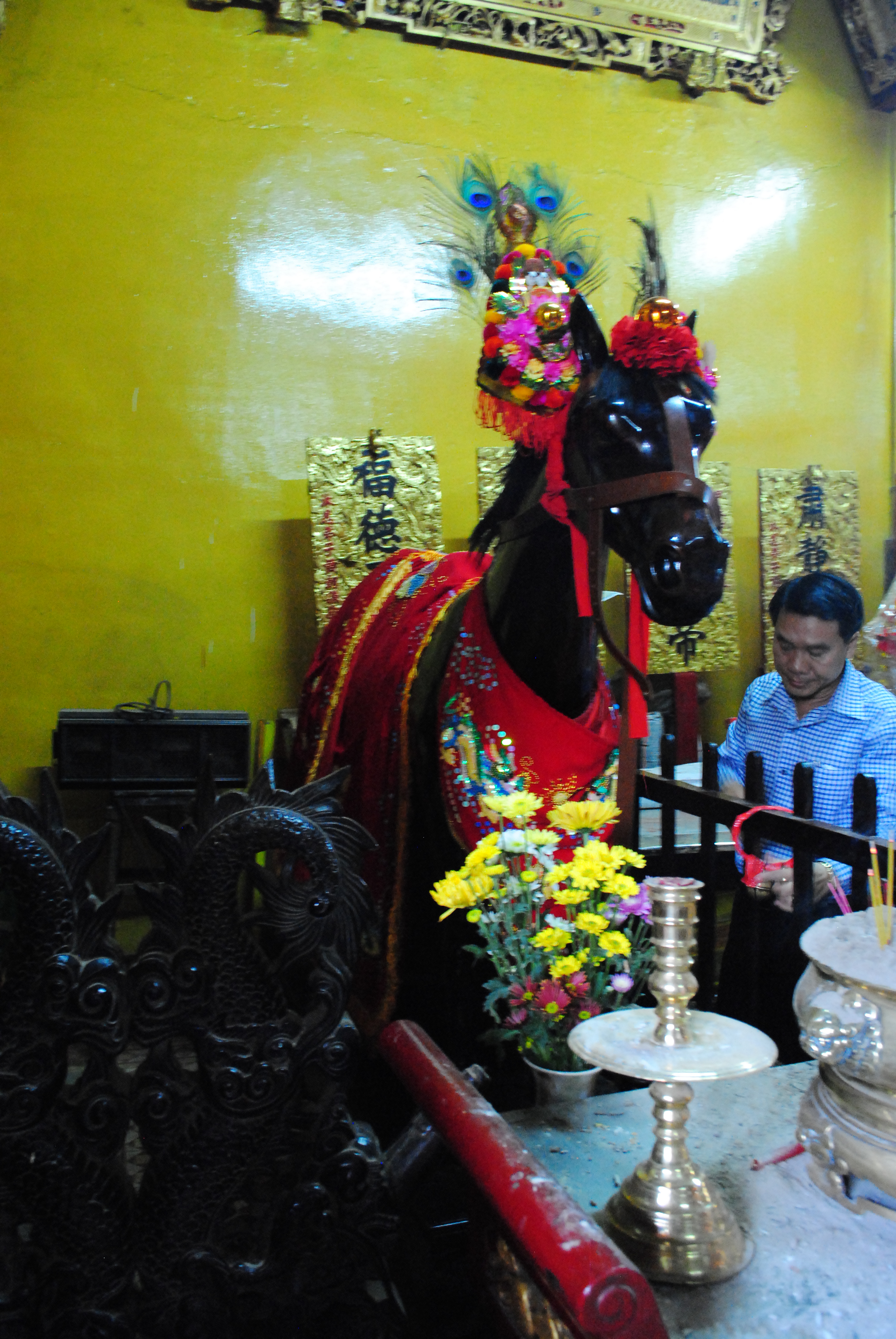 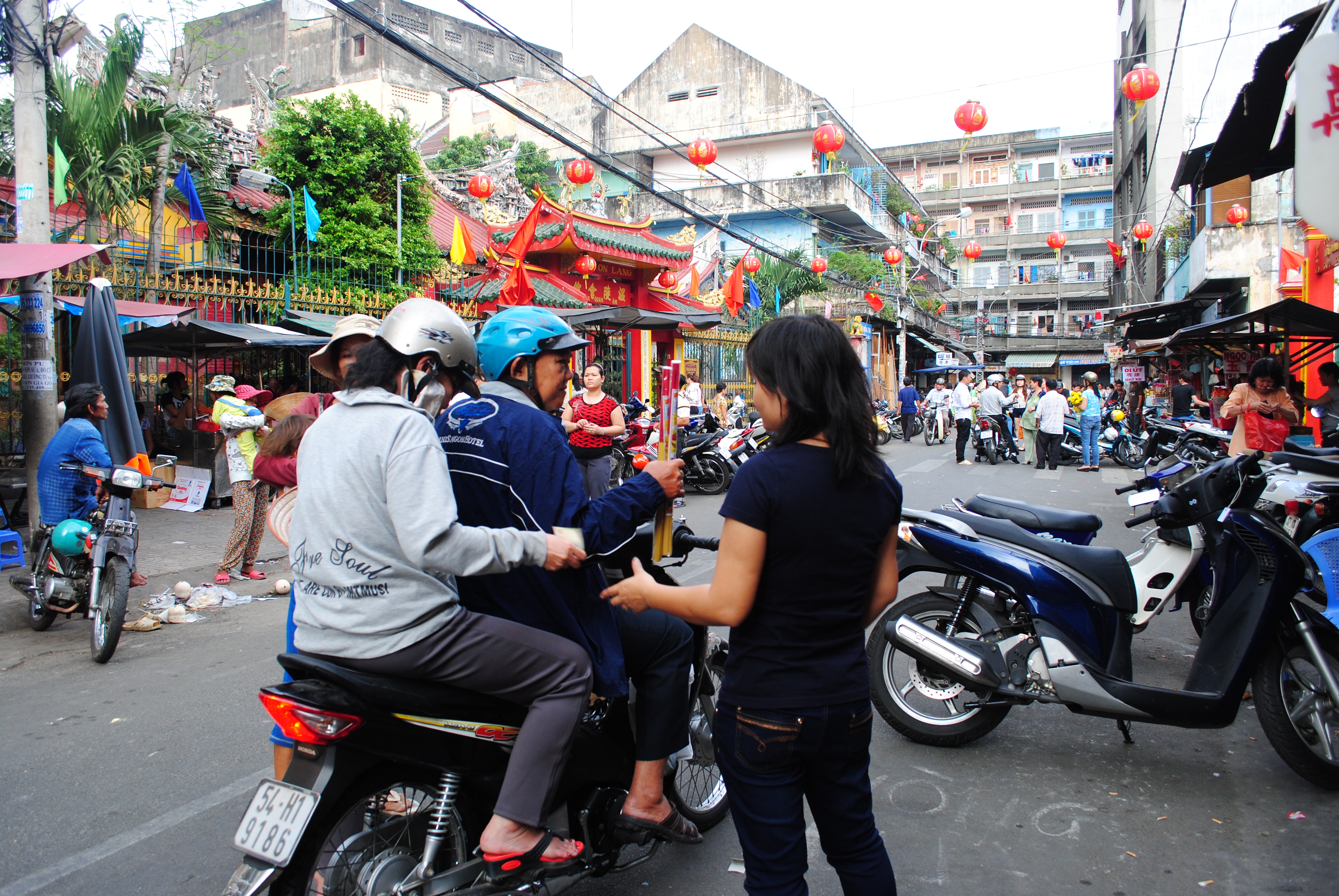 Massages, food and working on our online businesses filled the days of my New Year break and I returned, if not refreshed, then at least ready (sort of) for my 5am alarm and my early morning class on Monday.

4 thoughts on “C is for Cholon”