We’ve now landed in the great southern land and the adventures (and blog posts) have slowed down. Sorry about that.
Melbourne was looking pretty cold so we thought we’d ease ourselves into spring by stopping in Sydney for a week. It was a glorious 30 degrees but nowhere near as humid as Vietnam so even Barry found it bearable. Staying with my friends Rachel and Scott was fabulous. We were greeted with chocolate, vegemite and red wine. What more can you ask for after being in a country with none of these things for three months? There might have been a bit too much red wind but it all seemed like a good idea at the time.
The return of my stomach bug kept me lying low for a bit so it was great having Scott cook some home cooked meals. But it turns out what I really needed was a visit to the best Vietnamese restaurant in Marrickville! Barry started doing some work in the Regus business lounges in Sydney so it felt like he was going off to work in an office for a day. I’m sure he enjoyed doing some work in a room that didn’t contain a bed and a sleeping Simone!
I did manage to rouse myself towards the end of the week and we headed into the city to enjoy a drink at the Opera Bar. It springs up every year as the weather starts to get warmer and there are some fantastic views of Sydney Harbour Bridge and the bay. 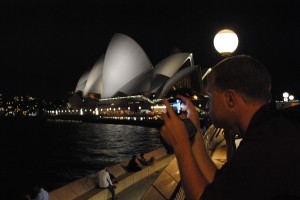 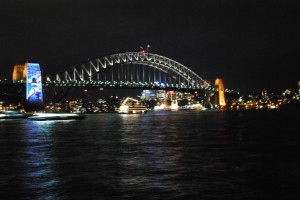 Barry was a bit worried that Australia would be full of Australians but it totally isn’t. In fact, I think Rachel and I were the only Australians Barry saw. Scott came over to Sydney from Scotland years ago and we met up with a number of Barry’s university friends, of various non Australian nationalities. And we only went to Japanese and Vietnamese restaurants (run by Japanese and Vietnamese people). I think we were pining for our tropical adventures already.