The Last of the Golden Circle

Driving along winding roads, we passed calm still rivers and gushing waterfalls, seemingly at every turn. The day was still incredibly windy but there was a lot more sunshine. The sunshine seemed to bring even more clouds so Julie and I were keen to head north. 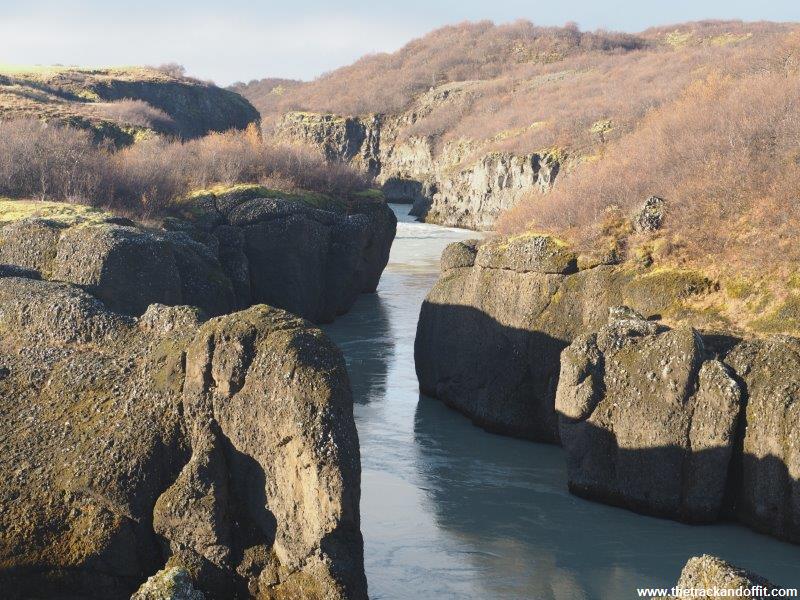 After turning off one minor road we came to an unusual looking peak. There didn’t seem to be too many cars so we pulled in (the cars and buses arrived moments later). We had found ourselves at Kerid. 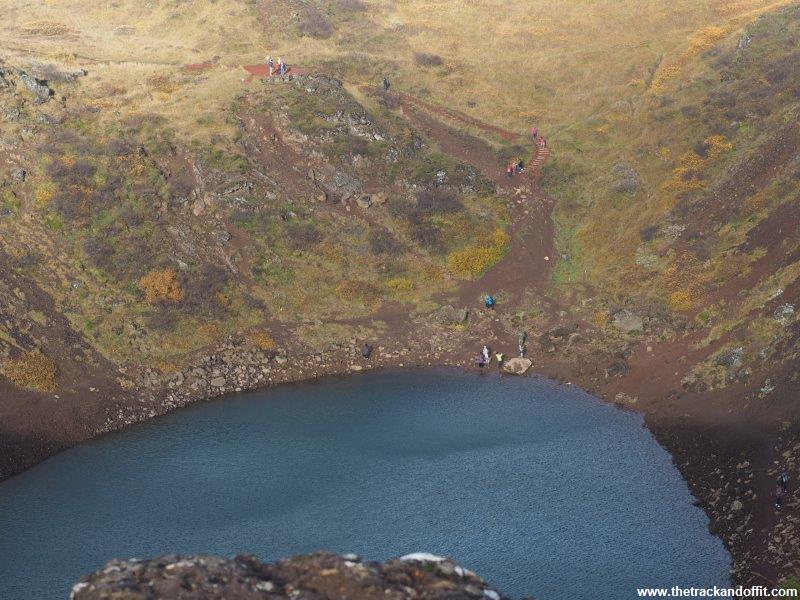 Kerid is a large crater with a large pool of water in the middle. For those into the science of it all, the carter was not formed by an explosion but probably from a magma chamber beneath the earth being emptied at the end of an eruption, causing the ground to collapse (about 6500 years ago). The water in the middle is formed from ground water and never drains away but rises and falls according to changes in the water table.

Bjork once held a concert on a stage floating in the middle of the pool of water. 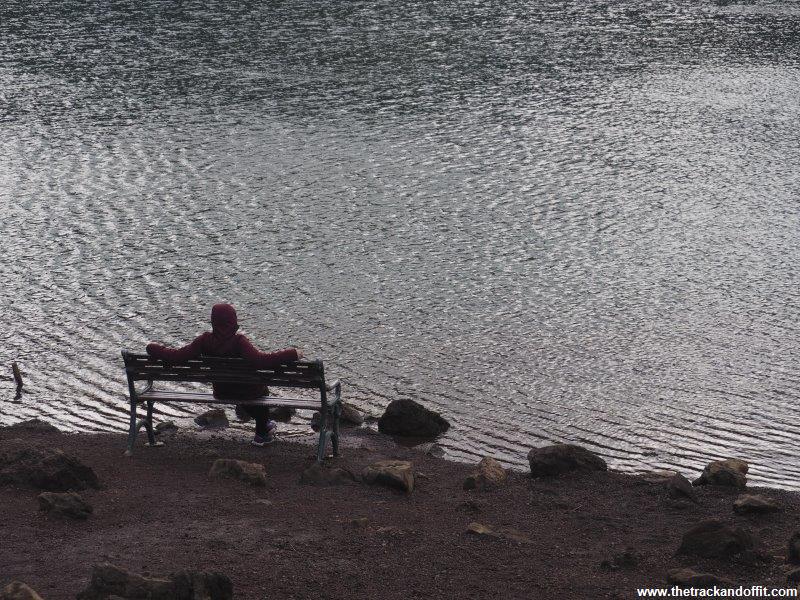 Julie and I walked the perimeter of the crater. So did a bunch of other people. It was windy but we didn’t get blown away. 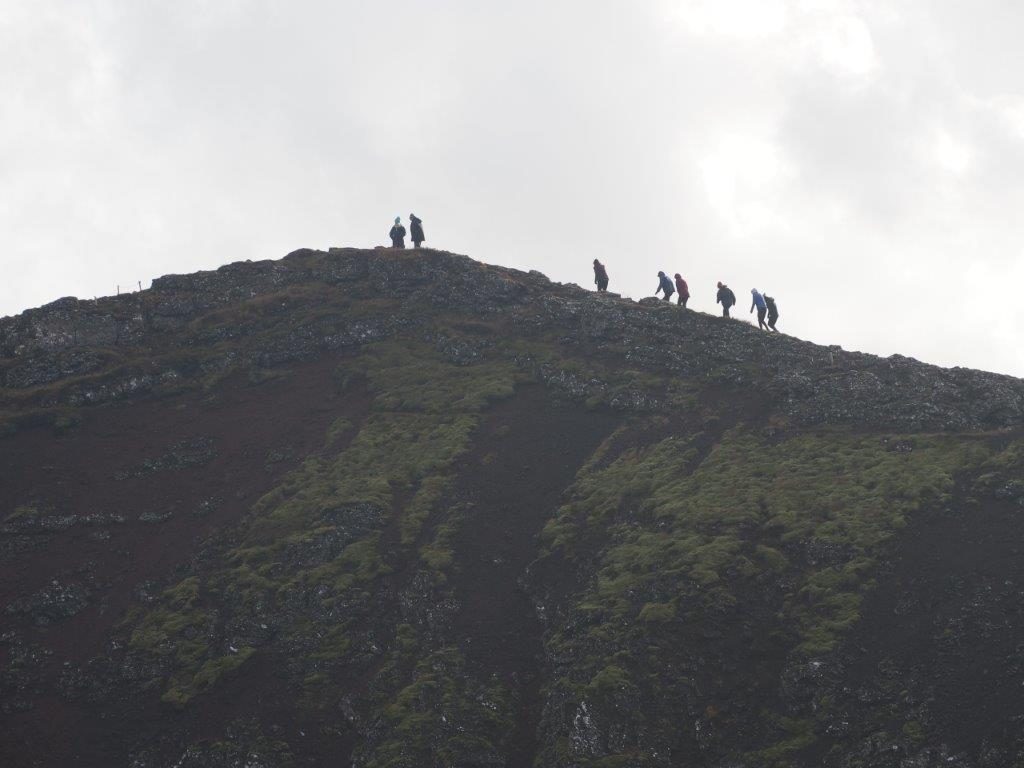 The wind picked up and a storm began to brew so we started making our way north to Snaefellsnes Peninsula. We’re still not exactly sure how to pronounce it. Julie and referred to it as Snuffleupagus Peninsula for quite awhile. We decided not to take the fancy new tunnel but the long way around Hvalfjordur. It was a much longer route but we were rewarded with waterfalls at every turn. And there were only three other cars on the road. There was probably at least 10 on the main route. 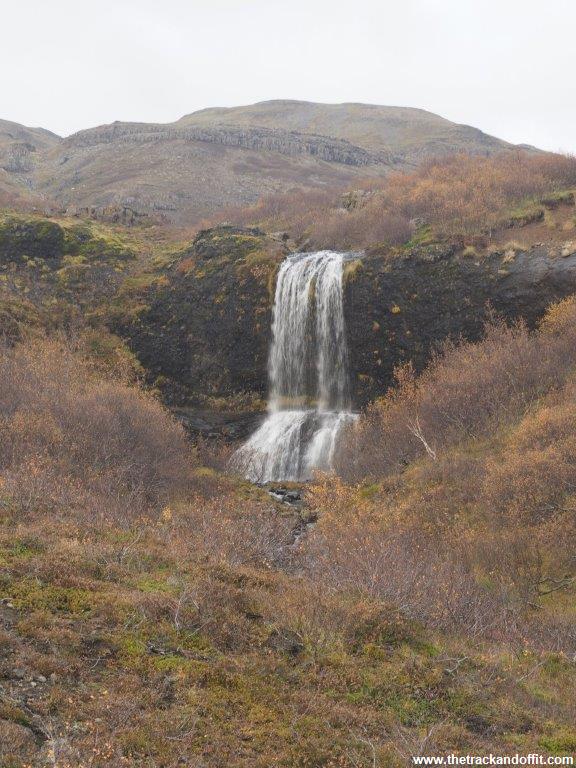 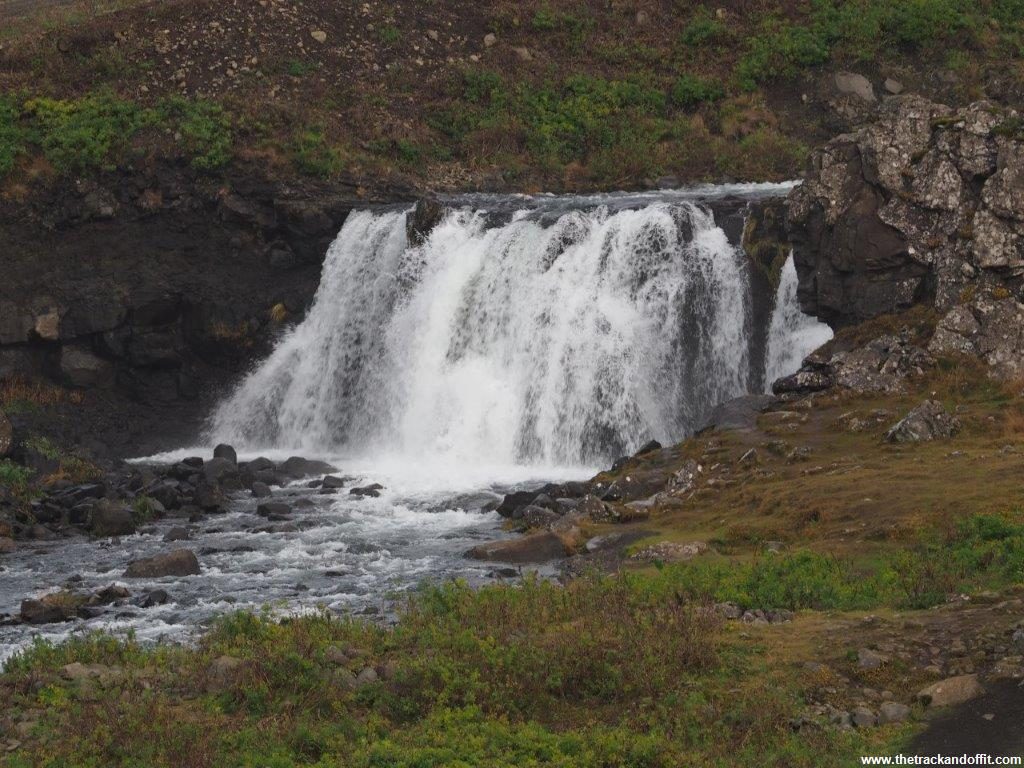 It was a beautiful drive.

Unfortunately, we couldn’t escape the weather and Snaefellsnes Peninsula was shrouded in clouds and rain. We stopped at Borganes to stock up on food. It seemed like a nice place but not the most picturesque for camping. So, we drove on, deeper into Snuffleupagus country.

The rain fell heavier. We stayed dry and warm inside our camper though, admiring the rivers and waterfalls without getting wet. The sun started to retreat. We weren’t sure if the clouds or the sunset.We tried to follow the map for a campsite at Eldborg but struggled. We tried the GPS and it took us to a hotel which allows camping on it’s ground. Yea! Unfortunately, closed for the winter. We didn’t find any roads that were suitable for pulling over and parking for the night (single lane tracks and the like). Heading back towards Borganes as a last resort, we eventually saw a sign, hidden away. Finally we reached our campsite for the night, a little farm site at Eldborg with warm dry bathroom facilities and a bunkhouse which was closed at this time of year. We had no need for the bunkhouse but used the shelter to cook up a storm, congratulating ourselves on a good days’ driving. 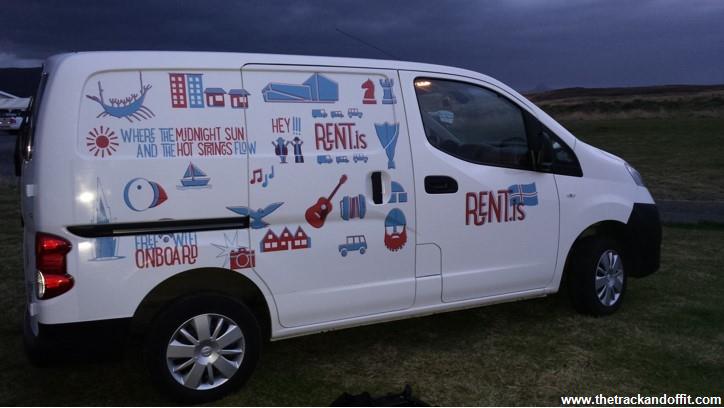 The next day was dry but low lying clouds greeted us. I’m sure there was a giant cloud over all of Iceland for the week. Sometimes we could sea sunshine out to see but it seemed to rarely touch our shoulders. The clouds did add to the dramatic scenery as we toured the Peninsula.

In a brief spell from the rain we explored the fishing village of Stykkisholmur. 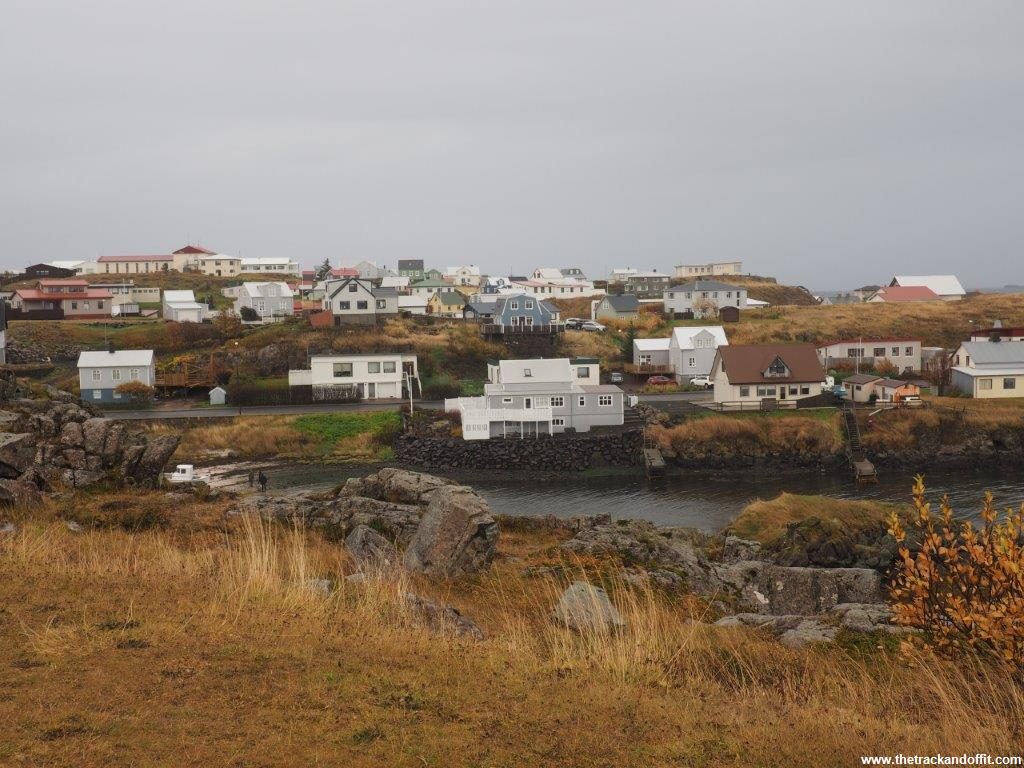 There’s a church there that’s supposed to represent whale bones. 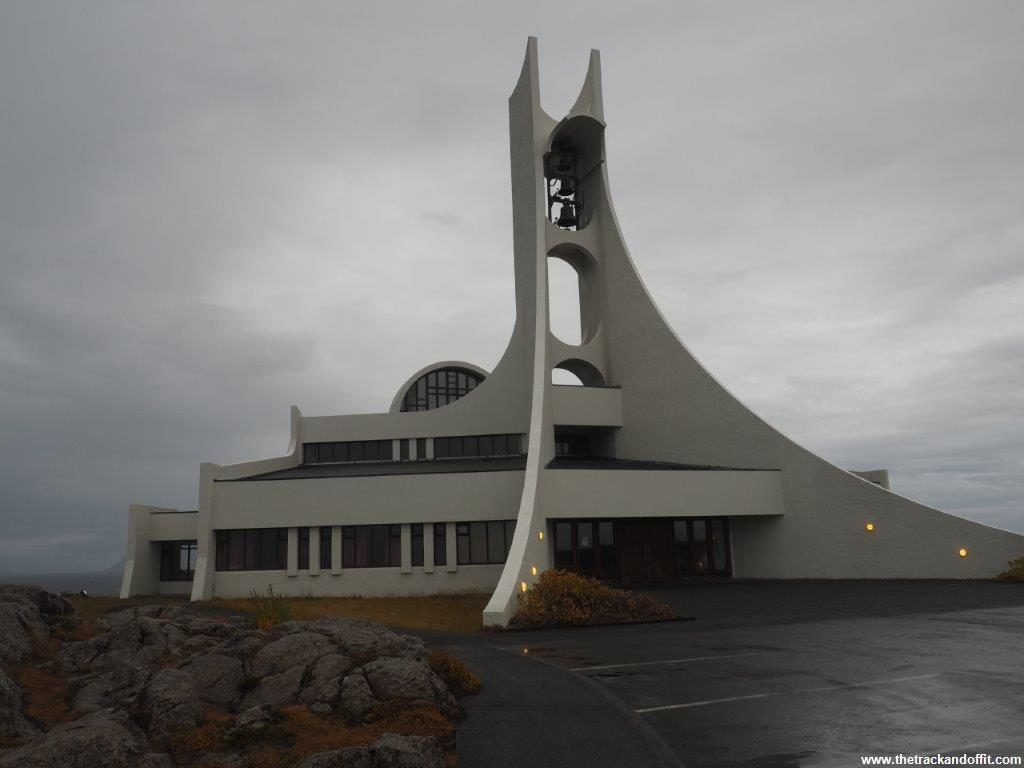 We timed it really well and ventured out into the rain to climb the small hill, Helgafell, where if you follow the rules, you will be granted three wishes at the top. I forgot to follow the rules. One of them was not to look back, one was not to talk and I kind of forget the third one but I clearly lost on rule three. So, I figured I might as well look about at every step, trying to find the break in the clouds. 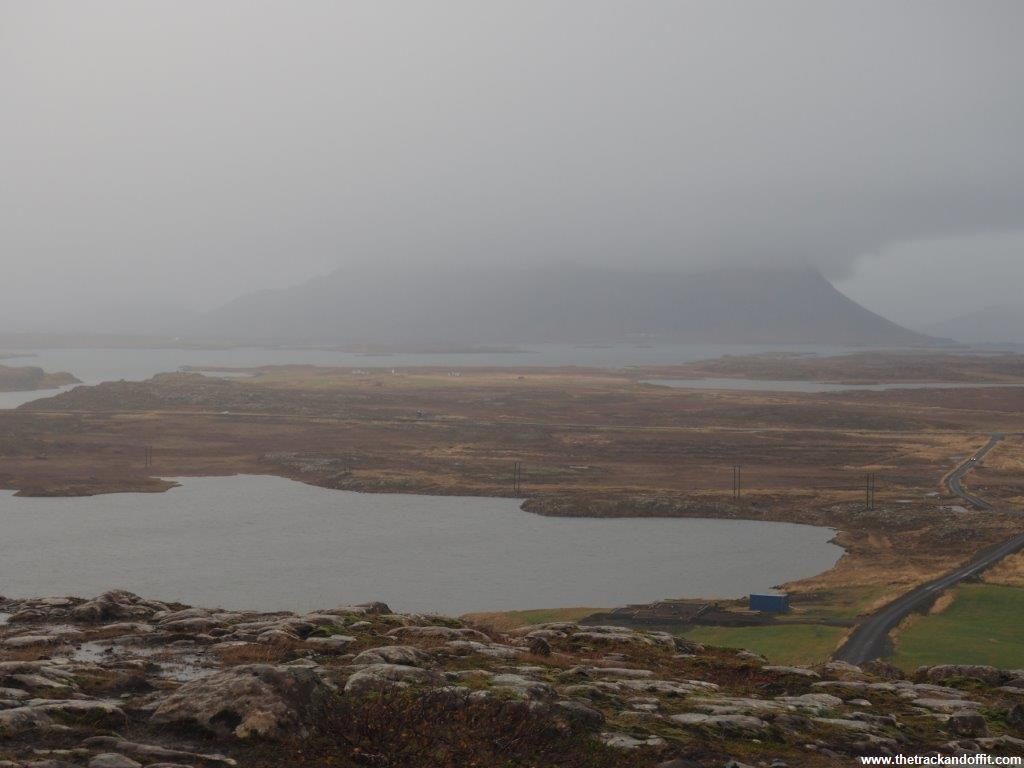 Somebody stole the volcano!

All these little islands are formed by lava deposits. I thought Julie said lava droplets and I think that’s a much better name. 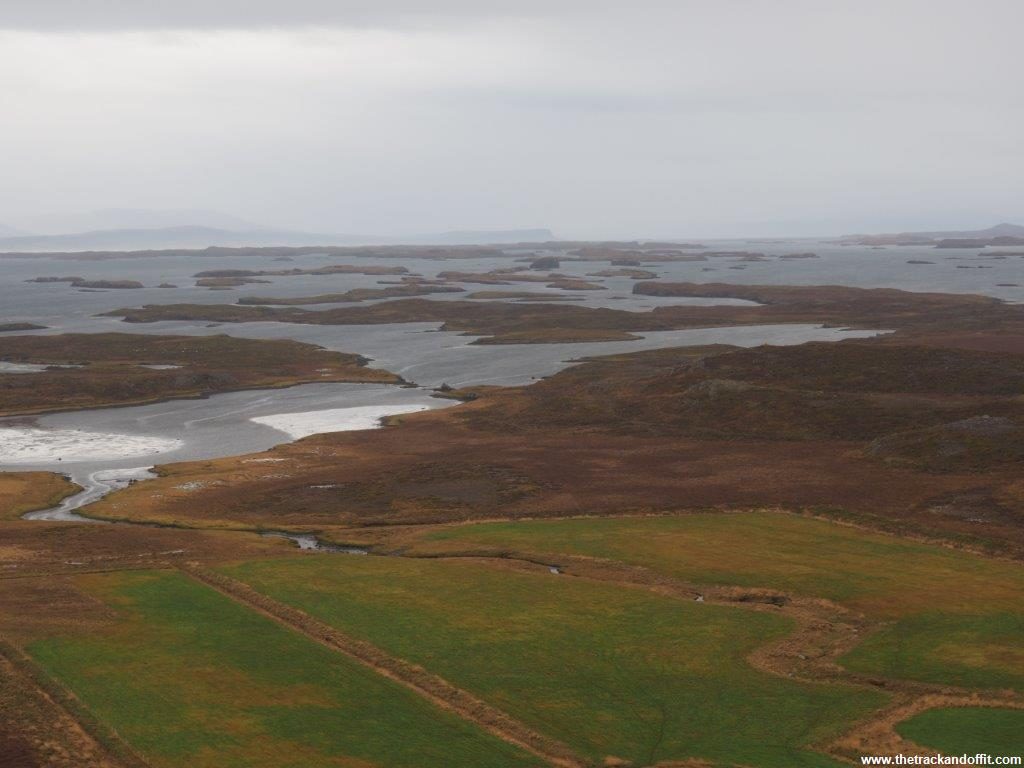 Julie did not fail on the rules and I hope she gets her wish.

It stopped raining when we climbed back into the van to tour the lava fields. The lava fields of Snaeffelsnes Peninsula are awesome moss covered lava droplets. Berserkjahraun lava field in particular is impressive. An Icelandic Saga tells the story of two large berserkers, running amok in the area and being tricked into building path only to be buried in a hole in the fields. 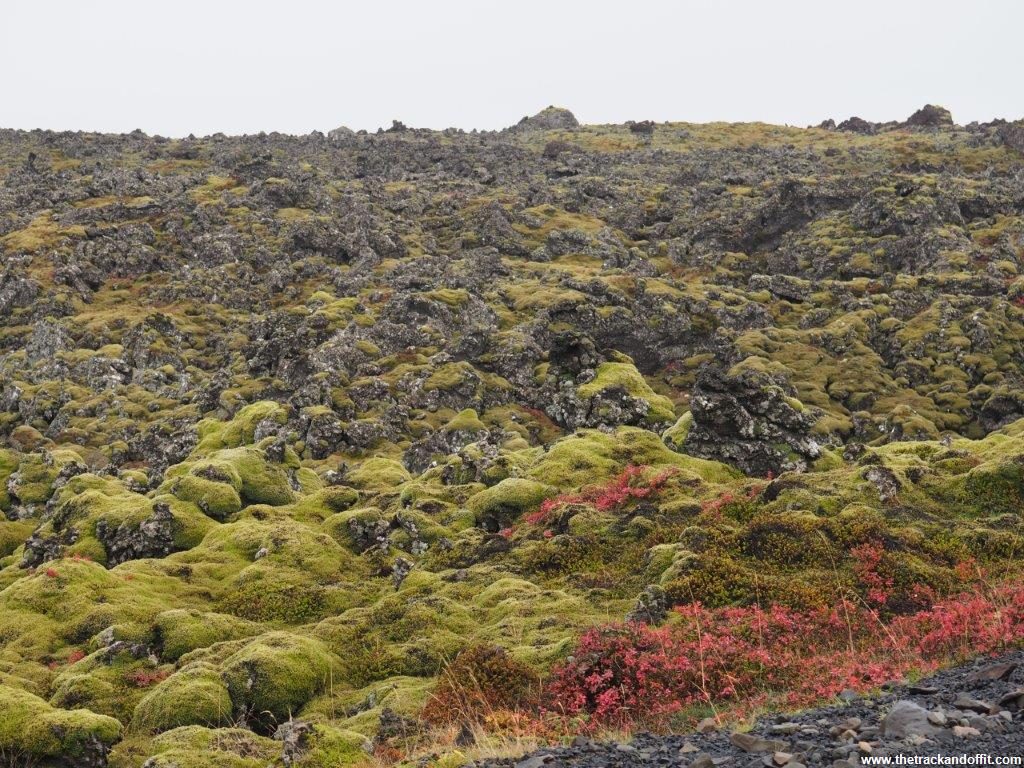 Love the sagas. The ancient bones of two very large men have actually been found in the area. 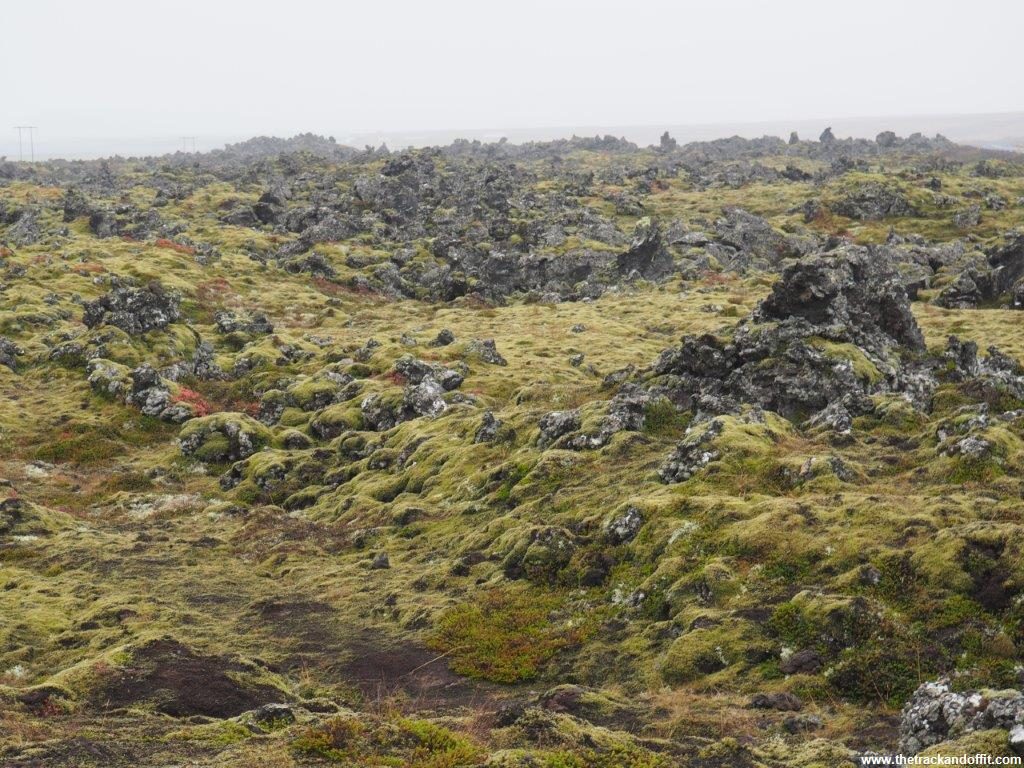 On our way off the peninsula we stopped in Borganes for more than a trip to the supermarket. For a bit of history and legend I really recommend the Settlement Centre and Saga exhibition of Egil’s saga. Far superior to that in Reykjavik. 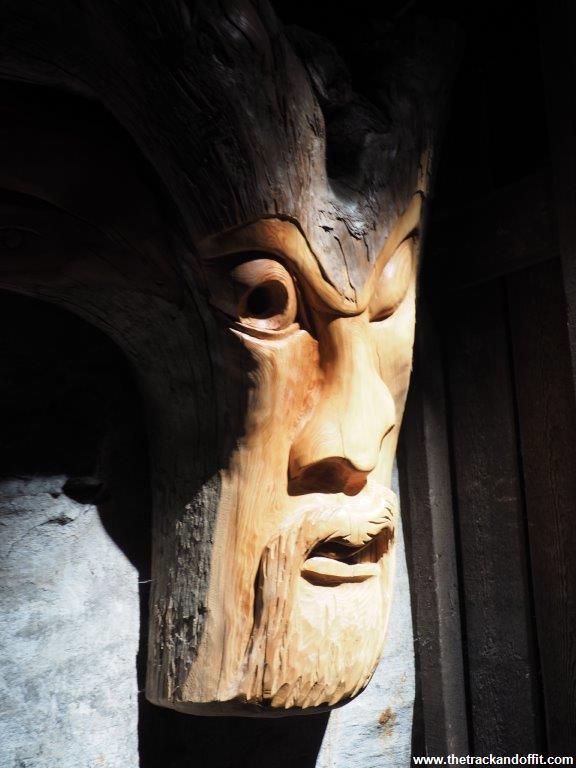 One thought on “Iceland – The Golden Circle to Snaefellsnes Peninsula”