Sakurajima YH redeemed itself by having it’s on hot spring onsen and loaning me a bike for the day (free stuff, yea!). It was a little rusty, dusty and didn’t have gears but did the job and saved me from hiring one.
The lady in the hostel told me at breakfast that there had been a small eruption overnight (at least that’s what I think she was trying to tell me) which I thought was pretty exciting. Heavy rain forecast again for the day and I think she thought I was a bit of an idiot to want a bike but I took off anyway, as buses around the island are few and far between. Probably once a month.
So, while the rain held off in the morning, I took off for the Arimura Lava Observatory, about 12 kilometres away, pretty much all uphill. I only got caught in a couple of showers and made good use of the umbrella while cycling. I barely noticed the rain though as I sweating buckets in the tropical heat. I passed lots of mudslide protection river looking things. 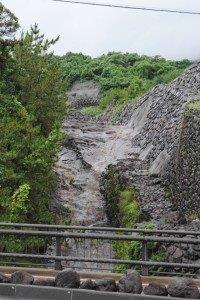 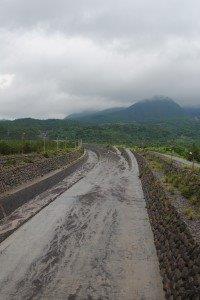 I started getting a little nervous when I kept passing eruption shelters that are scattered through villages that are close to the peak but I pushed on. The lava observatory is another site of the 1914 lava flow, near where it joined the island to the mainland, and is supposed to be the best place to view the smoking peak. Unfortunately, all I could see were clouds. And I have to admit, I kind of expected a lava observatory to be a bit more interesting. 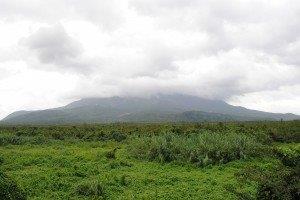 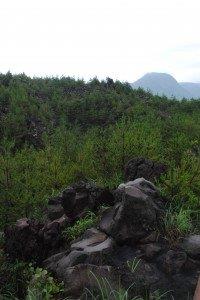 After walking around the lava I had to spend over an hour in an eruption shelter, hiding from a torrential downpour. I eventually had to brave it and cycled back to the main town. There was no point my going further around the island with all the clouds and rain. The mudslide protections had pretty much turned into rivers.
The bike ride itself was good and a nice way to see more of the island. I rewarded myself by soaking my feet in the public foot bath again. And watching the rain come down.
I got an overnight bus back to Osaka again that night, which took a little longer than scheduled as one of the highways was closed. Probably flooded.