Buying drinking water (in plastic bottles) is something about travel in third world countries that really bothers me. It’s really cheap to buy drinking water so it’s the cost to the environment that is of most concern. To combat this, when I travelled in Vietnam I would buy water in big 5 litre drums, take it back to my hotel room and decant into my sports bottle. But sometimes you’d move on before you drank it and, because I don’t like waste, I’d be taking that big bad boy with me on the bus.

I had heard about water filtering straws but had also read that they didn’t fit inside some water bottles. It would also mean that I would have to carry two pieces of kit wherever I went in order to have a drink.

So when I saw an advert in an EasyJet magazine for the Water to Go filtered drinking bottle, I was keen. The bottle contains a filter made from non woven media including carbon and will filter 99.9% of contaminants, including water borne bacteria, using NASA technology. I think it’s still relatively new as I couldn’t find a lot of independent information about it. The reviews I did find included reports like three weeks in South America of drinking the tap water through the filtered bottle and never getting sick, drinking from muddy streams while hiking (possibly amongst dead sheep), etc. No stranger to drinking the tap water regardless, I was set to give it a go.

I bought one for my trip to Thailand and beyond. Here are my thoughts: 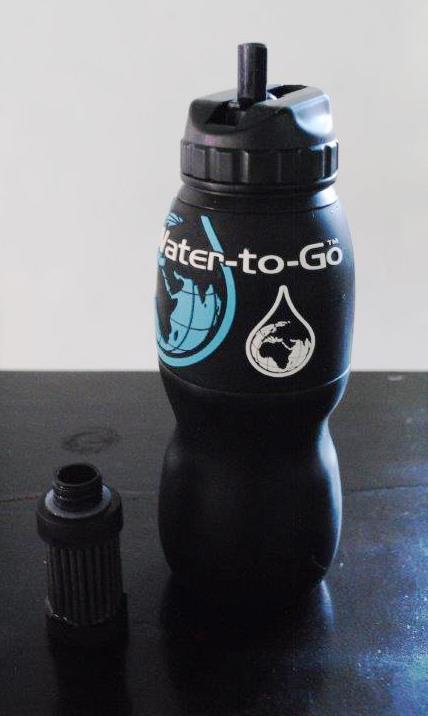 The Bottle – it’s about 750ml, the same size as your average sports bottle. The filter is surprisingly light, it doesn’t add that much weight and the whole thing feels no heavier than most other water bottles. I was also surprised at the ‘guzzle’ rate. It seemed really easy to give it a bit of a suck, the bottle a bit of a squeeze and get refreshing water down your throat. I don’t think it’s much harder than drinking out of a non-filtered squeeze bottle.

The Filter – as I mentioned, it’s light and fairly small, about two inches high. Not sure if the astronauts used it but the filter was developed with technology from NASA and will filter 99.9% of contaminants. It’s due to last at least 200 litres/three months. Tips on www.water-to-go.eu say that when the water starts to taste bad, it’s a good indication to change the filter. I, however, found that when the water is hard to get out of the bottle, when you have to suck harder than for a McDonald’s thickshake, it was time to change the filter. Unfortunately, my first filter lasted barely four weeks. I was only drinking tap water, not muddy and full of debris. According to Water to Go, this is unusual so I’ll update this review in another month or so.

I have calculated that if drinking at least 2 litres of water per day (three bottles, 2.25 litres) you would hit the 200 litre limit after 88 days. In a hot country I would drink more (say, four bottles or three litres), meaning the filter would only last 33 days, far shy of the three month mark.

Price – the bottle itself retails at £24.95. This is expensive when compared to buying bottled water. But if you’re a long term traveller it might pay off. The filters retail at £14.95 for a pack of two. So a nine month supply of water (assuming the filter doesn’t finish early) will cost you £39.90. That doesn’t include postage. You can buy the bottles on Amazon, but the filters need to be bought directly from www.water-to-go.eu and £3.95 for standard delivery in the UK. Heaven forbid that you live outside the UK or happen to be long term travelling in Asia, for example. These small and light filters will set you back another £14.50 in the EU, £16.50 to other European countries, £25 on postage to Laos or £18 to Australia. Ridiculous! Royal Mail International Air Mail would deliver for no more than £8 and probably a good deal less. The postage costs are the real failure of Water to Go bottles.

They do give you 10% off for life if you register your bottle on the website. They cunningly apply this before VAT and postage so it’s worth bugger all and certainly not enough to offset the ridiculous international postage costs. VAT is also charged on orders outside of the UK. I’m not sure of the legalities behind this but every other company I’ve dealt with does not charge VAT on international orders.

Conclusion – after months of drinking water from dubious sources I am not ill so I have nothing against the reliability of the bottle at this stage. The costs are a different story. Bottled water in developing countries is often very cheap and, in parts of Thailand at least (I have not seen them in any other country, nor in Bangkok or the Gulf islands), you can fill up from a water dispensing machine for 1 baht per 2 litres (although there are reports that these machines aren’t exactly clean and dispensing safe drinking water!). If there are no water machines, you’ll need to weight up the cost of the bottle against how long you’ll be travelling and how much water you’ll need. Then weigh this against hassle of going to the store, availability of stores on your travel route, etc.

If you plan on stopping long term then buying large office sized 20-25 litre bottles of water is a good option. In Laos, the family we house sat for got the bottles delivered for about $1 each. In Cambodia you can buy them $5 then refill for a little less than $1. They have a small tap at the bottom like a box wine tap so you don’t need the cooling source. This seems to be both a cost effective and an environmentally friendly way of getting drinking water. 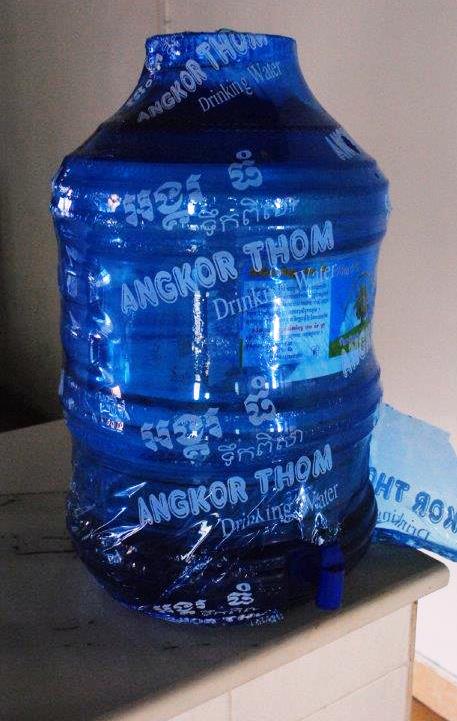 Depending on your location and where you’re travelling, this could be a real money saver. If you’re not in the UK you’re better sticking to bottled water or comfort yourself with the savings to the environment as the postage costs outside of the UK kill all financial savings.

Along with getting a friend in the UK to send filters on to me, I’ll be saving the bottle for when I’m actually travelling and moving around. So, it’s goodbye plastic bottles. Goodbye buying water. Goodbye lugging 5 litres around. Hello taps, rivers, streams, muddy water and gutter water. Hello safe drinking water wherever I am.

3 thoughts on “Safe drinking water on the go – Water-to-go.eu”